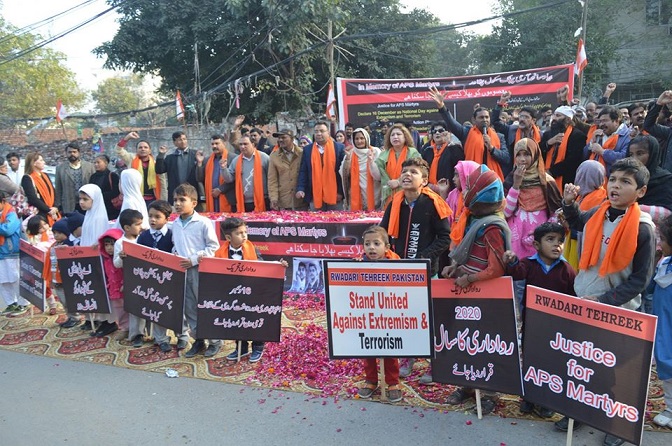 Lahore: (PCP) On 16 December 2019, Rwadari Tehreek held a Memorial Camp in front of Lahore Press Club in the memory of all those who lost their lives at the Army Public School – Peshawar on 16 December 2014 and victims of all other terrorist attacks.

The participants of the Memorial Camp unanimously demanded that those responsible for APS massacre should be apprehended, exposed and their trial should be held on priority basis including the trial of former spokesperson of terrorist outfit Tehreek-eTaliban Ehsan ullah Ehsan who was arrested in April 2017.

Chairman Rwadari Tehreek Samson Salamat in his message said that “even after 5 year to the APS incident the whole nation is still in a shocking condition and sadly much awaited justice has not been done. Therefore Rwadari Tehreek demands seriousness of the state functionaries suggest a stern action against the terrorists and militant outfits wherever they exist without any recognition of good or bad because these terrorists do not deserve any softness as they are killers of thousands of innocent citizens and should be brought before justice indiscriminately.

Mr. Samson Salamat further said that "In order to make sure that the society is free of intolerance, violent extremism and terrorism, the government needs to be more serious and practical to ensure the effective implementation of the “National Action Plan”. Especially the ban on hate speech should be implemented in letter and spirit and all those found in spreading hate speech through print or electronic media or through loud speakers should be apprehended indiscriminately and there should be speedy trial of all those who are apprehended on the charges of terrorism" Mr. Samson Salamat added.

Naseer Ahmed, the President of Rwadari Tehreek said that “the financing of the terrorist groups should be checked strictly and stopped. And all those individuals or groups who are supporting the militants and terrorists openly or secretly should be held accountable”.  Moreover a very comprehensive border security plans are urgently required to control the foreign terrorists for entering in Pakistan and using our soil for terrorist activities”.

Samia Mughal, the General Secretary of Rwadari Tehreek South Punjab said that "16 December 2014- the day when our children were attacked at the Army Public School- Peshawar is the Blackest Day of our History and therefore we can never forget this inhumane act and this is the reason that we demand from the Government to Declare 16 December as a “National Day against Extremism and Terrorism”.

Vickram Manzoor, President Rwadari Tehreek Lahore said that "the syllabus of the educational institutions needs to be thoroughly checked and the material which spreads hate on religious, sectarian or any other basis should be eliminated from the curriculum and all those laws which are being misused to instigate people for violence in the society should be revisited”.

Member Rwadari Tehreek Sabina Malik said that “Peace cannot be achieved without Deweopanization of our society and therefore strong political will and an effective policy for Deweopanization should be formulated and a very heavy responsibility rests on the shoulders of major political stakeholders in this regard".

All the participants of the Protest Camp, particularly the leadership and the members of the Rwadari Tehreek pledged to continue their struggle against religious extremism, religious intolerance and terrorism to make Pakistan a peaceful place for all the citizens without any discrimination.