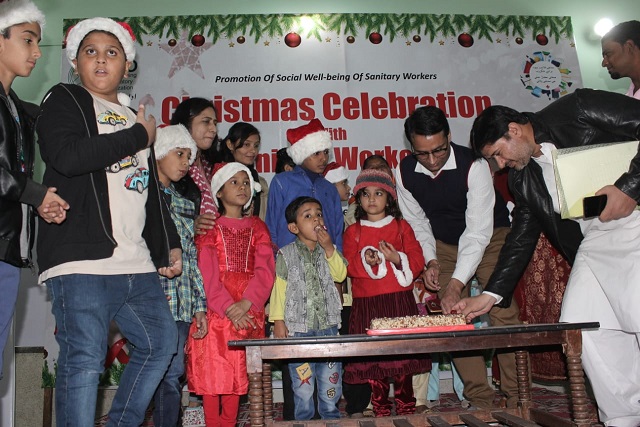 Children, including Christians, Hindus and Muslims wore dresses of Santa Claus performed songs, traditional dance and tableaus in the auditorium, which was decorated with Christmas trees and different images.

Father James with prayer opened the event with appreciative remarks to express solidarity with the most oppressed sanitation workers community, which he said deserve to be treated with equal respect.

The event was organized by Strengthening Participatory Organization (SPO) with sanitation community activist and brought more people representing their faiths together for promoting interfaith harmony and coexistence.

Nuzhat Pathan, PTI MNA while greeting wishes to the participants lauded the efforts of SPO to bring together the people living in the city neighbourhoods to celebrate such a colourful event, where children have come to perform songs and dance.

“It is for long time I came to meet women and children of sanitary workers with whom I used to spend my entire childhood in the old town,” she recalls the blissful days she spent. “On this auspicious occasion, I am really enjoying as my mother always encouraged me to play children of these people in the old areas of the city. She constantly used to motivate these people to enroll their children in government schools to change their own life. The same message I deliver to you today that education is only way out to change life,” she insistently asked the sanitation workers.

Talking about the “insaf sehat card” for sanitary workers, she said “though it is the responsibility of Sindh government, I assure you to communicate this demand to Prime Minister Imran Khan to think sympathetically for providing sehat cards to all sanitary workers in Sindh on priority basis, as they deserve it.”

PTI government has provided insaf sehat cards to 120,000 families in Tharparkar district. Now I will approach PM Imran Khan to provide sehat cards for these sanitary workers, who are deprived of these facilities since generations.

M Parkash advocate, a minority right activist also reiterated the message to the sanitary workers to educate their children, saying “you are not born for this job only. You should come in competition through education, which will keep the all ways open for you to reach the height.”

He recognized the role SPO for strengthening interfaith harmony through uniting people of all faiths. He said this message must spread to the government officials to change their behavior, stop discrimination with these people as their rights are guaranteed in the constitution.

Pirbhu Satyani, regional coordinator SPO Hyderabad said “yes, we have a reason to celebrate the annual event with sanitary workers, the most neglected community in the country. We are working for promotion of social well-being of sanitary workers, demanding the government authorities to ensure implementation of laws, confirm their jobs and provide minimum wages to these workers associated with all public and private organizations.”

In fact, the lives of these workers are not safe as they clean toxic manholes and sewages and suffer diseases, some of which affect their entire families. They are vulnerable while working without safety tools. Thus, the government should take initiative to take care of these workers.

These people are human being, they deserve to be treated like that and respect their dignity. It has been witnessed that these people are facing discrimination in the society, despite their role in cleaning our areas to make it livable for us.

He said “we have witnessed the community during these days, who seem busy in decorating their houses with different items, making Christmas trees and other images for the annual event. That is why we have decided to celebrate the event with them,” Satyani said.

Dr Ashothama, a human rights activist talked about the day, saying “in a way when people belonging to Muslims, Hindu and Christians came together for celebrating Christmas will help to strengthen the society.”

“We should come together and celebrate the days of all religions. This approach in such programmes will lessen the hatreds and differences within people,” he said.

These sanitary workers clean streets and roads because they have this job. But in return they face discrimination in the society, which is annoying for us because we want to promote religious harmony and peace, he said.

All worship places accommodate the people without any difference of class and status in the society. Thus, they should adapt the same spirit and respect for each other following teaches of their religions.

Arshad Saeed and Iftekhar Ahmed both health officers at Hyderabad Municipal Corporation (HMC) came to stage together for greetings to the participants and said their organization has released salaries to sanitary workers before Christmas celebrations. They expressed the hope there will be no delay in salaries for these workers in future.

A large number of community people with families, civil society, lawyers and media persons participated in the event.