Blasphemy laws need reform, but not to become more stringent 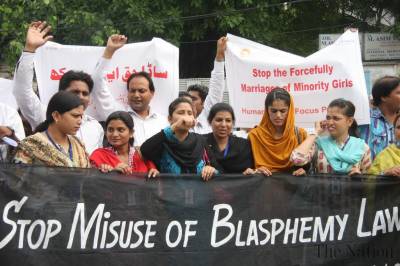 London: (PCP) The Punjab Assembly in Pakistan unanimously passed a resolution asking the government to improve existing laws, or make new ones, to sternly punish blasphemers.

It also called for a central screening system, like that used in Saudi Arabia, to intercept blasphemous content on social media.

The resolution said the country's current blasphemy laws were not being enforced properly, meaning some people were being allowed to commit blasphemy under the guise of freedom of expression.

According to the resolution, blasphemous content was available online, and some importers were bringing books into the country that would hurt the feelings of Muslims.

Nasir Saeed, Director of CLAAS-UK, has expressed his concern over the new resolution to make more stringent anti-blasphemy laws in Pakistan.

He said the current laws are already criticised by civil society and the international community for their continuous misuse. He said that there is no need to make these laws more stringent, but there is an urgent need to stop the ongoing misuse of the blasphemy law.

Mr Saeed explained: "There are hundreds of innocent people who have been languishing in jails for years as the courts delay their case hearings unnecessarily.

"Intentionally and unintentionally these cases takes longer than normal cases and judges - especially of the lower courts - avoid hearing these cases because of pressure from Islamic groups."

Wajih-ul-Hassan was released after almost 18 years  by the supreme court because the prosecution failed to provide substantial evidence against him, Asia Bibi was released last year after nine years while Imran Masih has already spent nearly 10 years in prison and his case is still pending for the final hearing in the Lahore high court.

Two prominent politicians Shahbaz Bhatti and the Salman Taseer were killed in broad day light. Several politicians including Ijaz ul Haq, the son of the Genral Zia ul Haq who introduced this law, have admitted that the blasphemy law is being misused and needs to be reformed but instead a resolution has been passed to make this law more stringent, increasing the chances for the law to be misused.