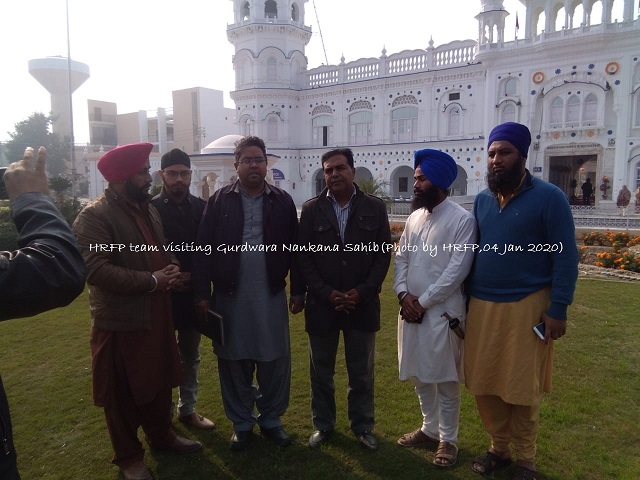 HRFP’s Fact Finding team consisting of Shadman, Nadeem and Saleem visited the place of incident and met with Sikh community, Gurdwara committee members and victims & families on January 4th and ensure them for every possible support on immediate basis in reaction of acts of destruction and desecration. Sardar Dass Singh welcomed to HRFP team and proudly announced with Sikh community gathered inside the Gurdwara that HRFP is a 1st group who came for solidarity, Sikhs are highly encouraged.  During interviewing Sikh members it is revealed that the rivalry was started on local shop aimed behind a conflict of Jagjit kaur case following’s; a Sikh girl abducted, forcefully converted and forcibly married to a Muslim boy Muhammad Hassan on 28th August 2019 and was returned back to her parents by government direct actions on 3rd September 2019 in governor house Punjab. HRFP welcomed the girl’s home returning and asked government that the Sikh girl’s returning proved if authorities took steps, they can do anything possible then why same actions are not taken yet for all minority girls, HRFP questioned but there was no answer yet. The answers came now after 5 months by Muhammad Hasan’s family with radicals through shouted slogans in city area and at gate of Gurdwara Janam Asthan, Nankana sahib.

Naveed Walter said that the mob has attacked on Gurdwara’s gate and they subjected to acts of violence on Sikh minority after Friday prayers where religious fundamentalists announced standing in front of Gurdwara gate that they will get back Jagjit Kaur from Sikh community to Muslims because girl has embraced Islam. The mob provoked people to change the name of city “Nankana Sahib” by “Ghulaman-e-Mustfa (slaves of Muhammad)”. Naveed Walter said that mob has proclaimed also during march that they will let no Sikh more in Nankana Sahib, the radicals appeared referring court case of Jagjit Kaur that she wished to go with boy as she said her father on 1st meeting after embracing Islam that if they will return back her to Sikh community then on doomsday she will catch his father’s neck, the mob alleged in aggression and shouted that she was no more infidel after converting to Islam. Naveed Walter said that the mindset is not changed yet of boy’s family and radicals even after she returned back willingly to her parents because the ideology of fundamentalist always stayed on same condition that if someone become Muslim (even forcibly) , no way of their return. Naveed Walter urged to protect Sikh community they are under threats and to make initiatives to change the mind sets of people from grassroots levels instead to return any other Sikh girl in future, he added more.