A book on Christian persecution in Pakistan presented to UK Parliamentarian 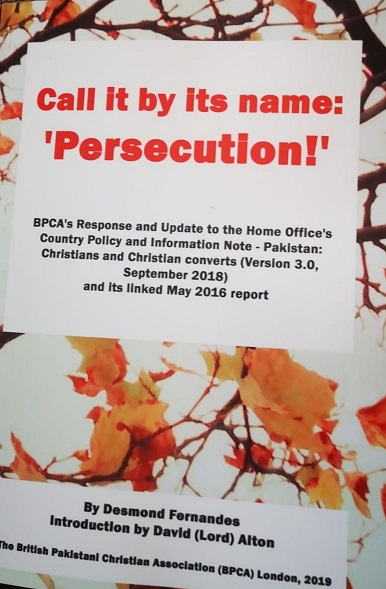 London: (PCP) British Asian Christian Association (formerly the British Pakistani Christian Association) has sent all UK Members of Parliament a copy of our most recent book, Call it by its name: 'Persecution!' The book comprehensively analyses and documents the manner in which Christians have been – and continue to be - persecuted throughout Pakistan. Exactly a year ago, the Supreme Court of Pakistan re-confirmed its decision to acquit Asia Bibi of the false charge of blasphemy. Whilst Asia Bibi no longer faces persecution, the plight of Christians still living in Pakistan remains precarious, as the findings of our recent book confirm.

For Saleh Memon, a founding member of the Campaign Against Criminalising Communities: "This book paints a truly horrific picture of the treatment of Christians in Pakistan, based on concrete evidence”.

Call it by its name: 'Persecution!' (paperback) can be purchased for ‎£10 (excluding postage & packing) via the British Asian Christian Association's (BACA's) online shop (here) .

Our book’s findings also support those presented in the Bishop of Truro’s 2019 Independent Report into Christian persecution around the world, which noted with some concern that:

"In Pakistan, … without exception, evidence [we gathered] referred to the British [government] reluctance to acknowledge (at least openly) the extent of persecution against Christians or to leverage their political influence with the Pakistan Government in support of Christians.

Both oral and written evidence highlighted the inconsistency in when and how the UK speaks out about persecution. [i]

Our book details the manner in which the Home Office does, indeed, despite substantive evidence to the contrary, deny the reality that Pakistani Christians, in general, face a 'real risk' of persecution. Its most recent September 2018 'Country Policy and Information Note (CPIN) - Pakistan: Christians and Christian converts' (Version 3.0, September 2018) - which decision makers rely on for 'guidance' in determining the 'refugee status' outcomes of Pakistani Christian asylum seekers - distressingly concludes that “Christians in Pakistan are a religious minority who, in general, suffer discrimination, but this is not sufficient to amount to a real risk of persecution”. [ii]

Although the 2018 Home Office 'Note' (CPIN) states that “information is compared and contrasted, whenever possible, to provide a range of views and opinions”,[iii] our book clearly documents the way in which it has scandalously disregarded the views, opinions and conclusions of key human rights organisations, academics, parliamentarians and Pakistan assembly members, public interest bodies, Church organisations and community representatives, investigative journalists and lawyers that have explicitly concluded that Christians in Pakistan face extreme levels of persecution. Three sections (pages 117 – 130, 219 – 251 and 296-299) in the book specifically document these key findings of 'persecution' of Christians in Pakistan that the authors of the Home Office September 2018 'Note' (CPIN) have chosen to ignore when making their assessment.

The consequences of such flawed Home Office guidance are distressing: Many persecuted Pakistani Christian asylum seekers are being denied refugee status and deported back to Pakistan where their lives remain 'at risk' because UK and UNHCR (the United Nations’ Refugee Agency) decision makers are drawing upon this entirely misleading Home Office 'guidance' to arrive at their 'refugee status' determinations.

Whilst Asia Bibi no longer faces persecution (having been offered asylum in Canada), the plight of Christians still living in Pakistan remains precarious, even as the Home Office misrepresents the extent to which Christians face persecution in Pakistan

David (Lord) Alton, former Vice-Chair of the UK All Party Parliamentary Group on International Freedom of Religion or Belief and Co-Founder of the Jubilee Campaign, in the 'Introduction' to the book, states that:

"This excellent book, which covers all the important ground relating to Christians in Pakistan and the persecution that they face, needs to be seriously considered by the Home Office policy analysts ... It provides up to date information that, hopefully, will result in revised guidance …

This book ... should be essential reading for all policy makers/analysts, lawyers, refugee rights campaigners, members of the public, academics and parliamentarians who are concerned about persecuted individuals and groups (inclusive of Christians) in Pakistan.

The Bishop of Truro’s report had also raised concerns that “evidence was taken from individual Catholic priests and nuns [in Pakistan] who had repeatedly had their visa applications refused, in one case for a course of study in the UK for which a place had been offered and the initial fees paid. The refusal led to a very significant financial loss. Another senior priest who has travelled on numerous occasions to other European and northern American countries has now had his visa applications refused three times by the UK visa application regional hub in Abu Dhabi. Given their lack of dependents and religious vows that require their return to Pakistan, these repeated difficulties are both surprising and point to potential discriminatory behaviour by the regional hub. This experience of apparent repeated discriminatory behaviour undoubtedly undermines the reputation of the UK Government in the minds of the minority Christian community. The Foreign and Commonwealth Office (FCO) should consider how the Home Office and relevant officials might be encouraged more effectively to assist the High Commission in supporting this vulnerable religious community”. [iv]

Whilst the independent Truro report points to “this experience of apparent repeated discriminatory behaviour” by the Home Office in refusing the visa applications of Christian nationals from Pakistan, our book’s findings reveal a specific UK government immigration policy that explicitly discriminates against nationals from Pakistan (alongside a few select other countries) by placing them on a secret 'list'. Mansouri and Son, a solicitors and law firm, has confirmed that “the UK Border Agency has drawn up” a “secret list” which “is not available publicly and Entry Clearance Officers are explicitly forbidden from disclosing the existence of the list”.

This 'secret list', human rights lawyer Shahram Taghavi points out, scandalously “not only offends against the established fundamental human rights principle of not discriminating on the grounds of nationality or race, but also violates a cardinal principle of the rule of law, the principle that laws must be accessible to citizens”.

Call it by its name: 'Persecution!' (paperback) can be purchased for ‎£10 (excluding postage & packing) via the British Asian Christian Association's (BACA's) online shop.

Concerning all of the above concerns which are raised in our book, we hope that appropriate questions can be raised in parliament by members of all parties and appropriate ethical actions can be undertaken by parliamentarians, the newly elected Prime Minister (who has proclaimed the UK as a champion of religious and other freedoms and has committed his government towards adopting the recommendations of the Truro report), Rehman Chishti MP (the Prime Minister’s Special Envoy for Freedom of Religion or Belief), the Foreign Secretary Dominic Raab and cabinet and shadow cabinet members and the FCO to request the Home Office to revise its guidance appropriately in light of all the information presented in the book, and to address these persecution related issues in Pakistan responsibly in a foreign policy context.

Foreign Secretary Dominic Raab has already outlined his concern that “a staggering 83% of the world’s population live in nations where religious freedom is threatened or banned. It is an area where the UK can and must make a difference. I’m delighted to be working with Rehman to enhance the UK’s support for those suffering persecution based on their faith”. The FCO has stated that the Special Envoy “will also advocate for the rights of all individuals here in the UK” – and here we appreciate that it must also mean all asylum seekers here in the UK seeking just deliberations on their refugee status applications – “and around the world who are being discriminated against and persecuted for their faith or belief”.

Their turning a blind eye for the purposes of realpolitick has allowed fundamentalists to hijack Pakistan's political trajectory - creating a nation bent on the destruction of the west, a counter product of their failure to stem the tide of hate.

"We hope this new book will create a stronger impetus to put right the failures of the past and to use British instruments such as foreign aid and improved trading rights to lever socio-political change in Pakistan."

is a human rights advocacy group, set up in the wake of the Gojra massacre of Christians in Pakistan in 2009 to raise the profile of the persecution of Christians and 'Othered' groups in Pakistan and other Asian countries, as well as support those claiming asylum in the UK and elsewhere. BACA is a trading name for British Pakistani Christians Ltd., a charity that has been entered onto the Register of Charities.