Two Christians shot and one attacked with axe for building a church in Sahiwal, Pakistan 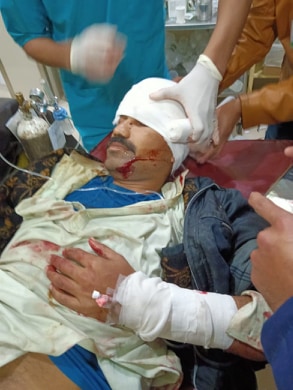 London: (PCP) Three Christian men survived a vicious attack by local Muslims in the town of Sahiwal in Pakistan which erupted over offence caused by attempts by the Christian men to build a church for worship services.

The argument began way back in June 2019 when Azeem Masih (24 yrs) felt called by God to donate some of his 2 Marla (1 marla = 225 square foot) plot of land that was allotted to his family under the tenure of Nawaz Sharif, in 2018. The church was going to serve the 35 Christian families who have been residing at 92/9L Chal in Sahiwal since partition in 1947, where they have all been working as masdoor (lunskilled abourers). Azeem and his family and all the local Christian families had all been going to seperate house churches within the community 'but God put it in my heart to unite our local worshipping community under one roof in a purpose built House of God.'

Azeem and the Christian community were of course very excited by the project and all the local families donated to the project and began building their new place of worship.

When the local Muslim community discovered the purpose of the new building work they became incensed. The idea that deprived Christians could be building an offensive Christian worship centre in their midst became to much to bear. Leaders within the larger local Muslim community of 230 families including: Muhammad Liaqat, Muhammad Akram, Haider Ali, Asghar Ali, Ghulam Muhammad Umar Farooq and others submitted an application to the District Commissioner Sahiwal named Mian Muhammad Zaman Wattoo calling for the development to be terminated. In tandem they also submitted the same application to the Station house officer (SHO) at Police Galla Mandi named Imdad Hussain Baloch.

The District Commissioner ordered the Station house officer (SHO) to carry out an investigation into the building of an unapproved church and SHO Imdad Hussain Baloch called elders from the Christian community for a meeting at his office on to discuss the building.

"Our church was to be affiliated to the Associate Reformed Presbyterian Church (ARPC) which is a well known congregation and is already registered with the government of Pakistan and has many branches in different areas of Pakistan.

"We should be exempt from the requirement for a new registration as we were only creating a new branch here in this village."

Azeem Masih then decided to build his own home on the plot of land and informed local police and the DC Mian Zaman of his intent. However as soon as he had completed the outer wall and a door to the front of his building (1st February 2020) to secure the property, the community angst began again. Led by Muhammed Liaquat 15 local Muslim neighbours called the local police stating that 'these Christians are building a church again despite strict orders from the District Commissioner.'

When police arrived at the scene, they found both the parties in a very heated argument and arrested 6 members of the Christian community including Azeem Masih and 6 Muslims including Liaquat Muhammed. The men were arrested under section 147 and 151 (known as 7/51 in laymans terms) of the Pakistan Penal Code as a precautionary measure to prevent a fight.

147. Punishment for rioting. Whoever is guilty of rioting, shall be punished with imprisonment of either description for a term which may extend to two years, or with fine, or with

151. Knowingly joining or continuing in assembly of five or more persons after it has been commanded to disperse. Whoever knowingly joins or continues in any assembly of five or more persons likely to cause a disturbance of the public peace, after such assembly has been lawfully commanded to disperse, shall be punished with imprisonment of either description for a term which may extend to six months or with fine, or with

(2nd February 2020) all the 12 men were released on bail, and warned not to fight among each other again or they would face prosecution. During the hearing all the men had exhibited remorse and had declared a mutual resolution for peace, the Christian men were told by the men kept over night with them that no more anger would be displayed.

However, the anger from the Muslim villagers had not dissipated, if anything, their desire to cause harm to local Christians had reached boiling point.

Unable to control their temper that night the hatred for Christians manifested again at 11pm while all the Christian families were in their homes and most were asleep. Liaquat Muhammed , Mohammad Haider, Aslam, Asghar Ali, Mohammad Akram, Kaleem Ullah, Abid Ali along with 25 unknown people who were all armed with weapons gathered around the Christian enclave and started shouting and abusing the frightened Christian community. They challenged Christians to come out and face a violent onslaught and even kicked in some doors and dragged Christians out.

Local Witness Wilson Raza, said: "They called us Chura (dirty cleaners) told us that kaffir should be toilet cleaners and threatened to rape all our women before us.

"We pleaded with the men to leave us alone but they seemed intent on violence.

"The women were screaming and we all began to pray seeking God's intervention to save us all."

When everyone including Azeem Masih and his cousin Sajid Masih (22 yrs) had exited their homes the Muslim community opponent fire and shot Azeem Masih in his head knocking him unconcious, Sajid was also shot in the head and also fell to the ground unconcious, an axe was thrown at another Christian named Razaq Masih who was hit in the leg suffering a severe wound.

Before coming out of their home some Christian locals had called the police and soon sirens could be heard in the distance. One of the armed Muslim gang members shot his fried a Muslim later named as Jazib Mohammad on the leg (in an attempt to portray a two-way battle) and then the Muslim mob quickly dispersed.

On arrival at the scene of the crime local police immediately assisted the injured Christians and took them to District Headquarters Hospital, Sahiwal.

The ederly Father of Azeem Masih, Gulzar Masih (65 yrs), reported the incident to Gala Mandi Police on 3rd February 2020 and a First Information Report (FIR) under sections 324,148, and149 [see definitions at end of article] has been registered. Despite guns being used, a man left critically ill in hospital and a beleagured Christian community still receiving threats including fear all the young women will be kidnapped, raped and forced into Islamic marriage - local police seem to be doing nothing to progress the case.

One of the medical reports we have been provided with all of them.

Wilson Raza, said: "The Musliim villagers who are against us are powerful politically and financially and we have little hope for justice - after all we are hated Christians.

"We are praying for a return to life with original vigour for our injured brother Azeem and have been consoling his family especially Baba Gulzar Masih.

"This attack has left us devastated and fearful many of us our deciding whther or not to leave our community where our ancestors have been since the partition of India.

"It is heratbreaking that the simple act of building a church can cause enough offence to Muslims to lead to such violence.

"This hatred is so deep there is little hope for our future generations.

"Even then we trust God."

Juliet Chowdhry, Trustee for the British Asian Christian Association, said: "When a young man's sacrifice of his valuable land to build a church for the glory of God and to bring hope to his community, results in him being shot in the head in an attempt to kill him - it's hard to fathom.

"One can only imagine how this pains our Lord Jesus Christ who gave His life that we might live.

"People of good conscience have to stop being shell-shocked and must speak out against such injustice - the hate will will not resolve by itself."

She added: "This attack is a reminder of the abject hatred many Muslims have towards Christians in Pakistan. "This hate has been fuelled by a national curriculum that demonizes and caricatures Christians and in addition the many children that do not go through formal school education as madrasser education is less expensive and a short walk away. "The hate agenda taught in madrassers is even more spiteful towards Christians and other minorities and these factors are at the heart of social polarisation. "The Pakistani Government must introduce a new curriculum in all provinces and police forces across the nation must be made to uphold the law or Pakistan should have all foreign aid from western nations terminated."

BACA is travelling to the community and will be offering legal support, advice, counselling and other support. We will also be paying for any outstanding mediacl bills for the victims.

Whoever is guilty of rioting, shall be punished with imprisonment of either description for a term which may extend to two years, or with fine, or with both.

Every member of unlawful assembly guilty of offence committed in prosecution of common object:

Whoever does any act with such intention or knowledge, and under such circumstances, that, if he by that act caused qatl, he would be guilty of qatl-i-amd, shall be punished with imprisonment for either description for a term which may extend to ten years 129[but shall not be less than five years if the offence has been committed in the name or on the pretext of honour] 129, and shall also be liable to fine, and, if hurt is caused to any person by such act, the offender shall, in addition to the imprisonment and fine as aforesaid, be liable to the punishment provided for the hurt caused:

Provided that where the punishment for the hurt is qisas which is not executable, the offender shall be liable to arsh and may also be punished with imprisonment of either description for a term which may extend to seven years.