Two Pakistani Christian shot in the head for church construction 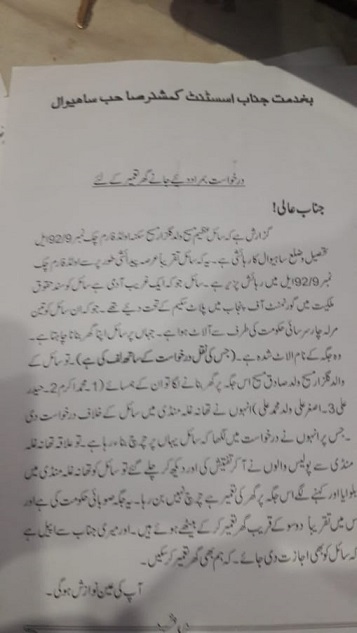 London: (PCP) Two Pakistani Christian men who were working on the construction of a Church in Sahiwal, Punjab have been shot in their head while other have been injured.

On 2nd February local Muslims Muhammad Akram, Muhammad Liaqat, Aslam and their companions attacked the Christians, who wanted to build church on their own land in their village Chak no 92-9L, District Sahiwal (Punjab). Chak no 92-9L is small village comprising of 150 houses, while the total Christian population is about 120 -150.

Christian man Gulzar is the legal owner of the land and has documentary evidence and legal proof of ownership. He wanted to build the church for local Christians, so they didn’t have to travel to attend church.

But Muhammad Liaqat opposed both the church construction and the ownership of that land and instead of providing proof of legal ownership they wanted the grab the land forcefully. But the main opposition was to have a church in the village.

Police were called to the attack and arrested both parties - Gulzar and his son, and Liaqat and his companions. They were all later released on bail.

Later that day Muhammad Liaqat, Muhammad Haider, Aslam, Asghar and Muhammad Akram and several other people equipped with firearms demolished the boundary wall of the Church.

When Gulzar Masih heard of this he and his sons rushed to the plot to stop the wall from being demolished, the Muslim attackers opened fire and three people (Christians) were severely injured. Azeem, son of Gulzar, was shot in the head, Sajjad was shot in his arm and Razaq was attacked with an axe.

All three were admitted in the Civil Hospital Sahiwal where they were provided medical treatment, Azeem was kept in the ICU. But he has since been discharged.

The other suspects fired their guns into the air and escaped the scene.

Several suspects (Muslims) have been arrested, but to diminish the severity of the attack, the attackers have registered a case against the Christians too, claiming that they attacked the Muslim men.

The police have registered a FIR and have arrested several Christians too, who have been released on bail.