Asia Bibi: God chose me at birth for my suffering 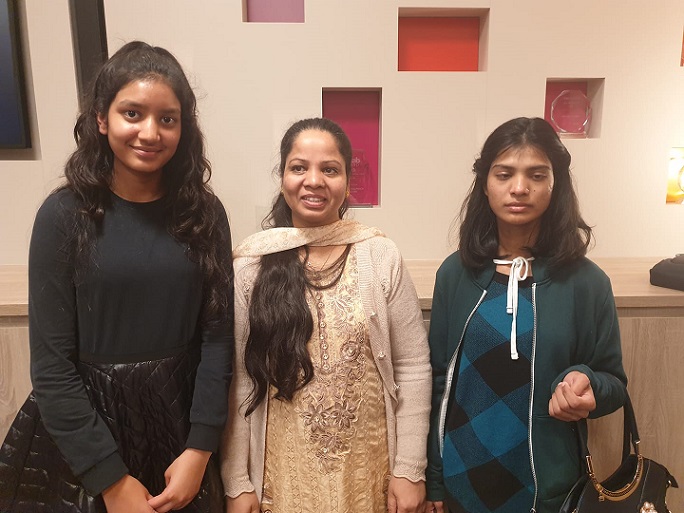 France: (PCP) Asia Bibi held her first ever press conference today and seemed so non-plussed you would have been forgiven for thinking it was her 50th.

The conference was primarily for the purposes of promoting her new book but questions within the conference seemed to be about anything but the publication, as amassed reporters competed with one another to get the chance to question her on aspects of her life, pre, during and post her conviction for blasphemy. Though arguably a lot of this information is exactly what her publication is set to share with the masses.

I was slightly taken aback by the pronouncement that Asia Bibi's current asylum in Canada expires at the end of December. Such a short deadline makes no sense considering the threat to her life and the effort it took to extricate her from Pakistan. However, the advice given suggested that Canada had not made a committment to offer an extension.

When asked about how long Asia would be in France, the consultant leading the press conference explained that it was not easy to move around and that Asia Bibi had only come to France for interviews but had a content life in Canada. This statement to me seemed contrary to the suggestion that Asia Bibi's stay in Canada was essentially coming to an end for official purposes.

What really warmed my heart however, was the description given by the spokesperson before the arrival of Asia Bibi, who was described as a 'very devout Christian, who believes that whatever happens to her, happens from God' she also explained how 'Asia Bibi prayed everyday during her imprisonment -it was her faith in God that gave her the strength to continue through her difficult life.'

At this point I realised just how strong a woman Asia had been, she had suffered a brutal incarceration, had survived numerous attempts to assassinate her, knew to some extent that 95% of her fellow citizens wanted her dead and yet was still able to take up her baton and won her race for salvation. We all could learn something from her...

A very pleasant description of Asia Bibi's time in prison was provided by the spokesperson who reiterated the account found in Asia's book about a small white bird visited Asia Bibi in Prison, during her long 8.5 years in isolation. Though this important message will have been missed by most of the assembled media, the relevance of this moment is paramount for me. Asia in her new book explains that she felt the presence of God through this encounter and it gave her strength. The bird became a reminder for her to pray daily and she stuck to the task with diligence, never losing belief that one day she would be free again.

Only the ascetics among us can imagine what it is like to have little contact with other humans, of which few will be reading this post. Even more challenging is the fact that Asia when she had human contact would have experienced a very cold and formal communicator, moreover she lost access to her family and other loved and close individuals which would have triggered an emotional vacuum. This must have been exhausting and traumatic but thanks to God not soul-destroying.

The spokesperson explained that Asia was still getting to terms with her new freedom and 'needed a lot of rest' we were told 'she wants a peaceful life.' She also confirmed that Asia attended church regularly in Canada and 'found it a great source of strength'

Asia Bibi's arrival to the interview was delayed somewhat (1.5 hours) due to her having met with President Emmanuel Macron prior to the press conference.

From the get-go, Asia was on form she thanked everyone for waiting for her and then thanked God for the visitors and everyone's safety.

Then the questions that reporters had put forward were read out to Asia and she kept her unflappable smile going throughout the evening - you sense her elation at being free has melted away any residual pain from her treatment in Pakistan.

Asia Bibi was asked about whether she got an answer her to her calling out to God 'Being tested by God is a big thing and can be difficult, you have to learn from the experience which should make your faith stronger."

"As a mother I had a natural desire to protect them and tend for them, I hard to learn great patience - God was testing me."

She added: "God saw my tears and heard my crying and when He felt the timing was right, he set me free.

"I had to be strong and so were my daughters, when God chooses you, he never leaves you!"

"I never doubted God something my faith is something was put in her heart by God before she was born.

"A priest at my baptism told my mother one day I would suffer greatly but that God would release me from this at an appointed time - I knew it was going to happen one day as my parents had forewarned me many times.

Asia was asked about the deaths of two Pakistani politicians who were assassinated for calling for her freedom. I am aware that Salman Taseer a Muslim Governor of Punjab was one of the first politicians to take up her cause, when he was killed on 3rd January 2010 it shocked the globe, but only 3 months later Shahbaz Bhatti the only Christian politician to have ever held a seat on the Federal Ministry (cabinet) of Pakistan was also murdered.

"When I think of these deaths my heart cries - someone who is killed for a cause never dies.

"When I heard the news in prison at first I cried for them -deep honest tears of sorrow.

"As I cried I naturally thought what will happen to me.

"Each death should have brought me closer to despair, but I knew God had a plan for me despite my world falling apart.

Asia was asked about her future and whether it would be in Canada or France and if a formal application had been made for asylum in Pakistan. Asia's reply indicated a reluctance to share too much. She said:

"France is a beautiful country and people have shown me a lot of respect and the European Union played a big part in getting me free.

"I had a slip on the snow in Canada and am still recovering and have not had time to think about where I want to go.

Asia exhibited great noble character during her interview and spoke of her forgiveness of all of those who have hated her. Anyone who read her eyes during her press release could see Asia really meant this. Despite all that has happened to her Asia Bibi simply wants peace in her life and a chance to reconnect with her family and worship God - she is truly an amazing woman and a perfect role model.

President Macron's office said French authorities are "ready to welcome Asia Bibi and her family in France if this is what they wish to do."

Mr Wilson Chowdhry the former Chairman of Bristish Pakistani Christian Association and father of Hannah Chowdhry, asked the translator if she was from Canada or France. To many seated at the press conference this would not have meant much. But after the translator stated she was from France we have deduced that none of the entourage with Asia Bibi is from Canada. This in itself speaks volumes of where her heart must be when all of those around her share the same national identity. It is purely the decision of Asia Bibi where she ends up and it has been wonderful to see her speak so confidently and honestly. We pray Asia and her family remain safe wherever they travel.

Soon we will be releasing more good news about BACA's work and Asia Bibi.

BACA were one of the few groups to have actively supported Asia Bibi and donated £6000 towards her final solicitors’ fees during the last months before her acquittal.