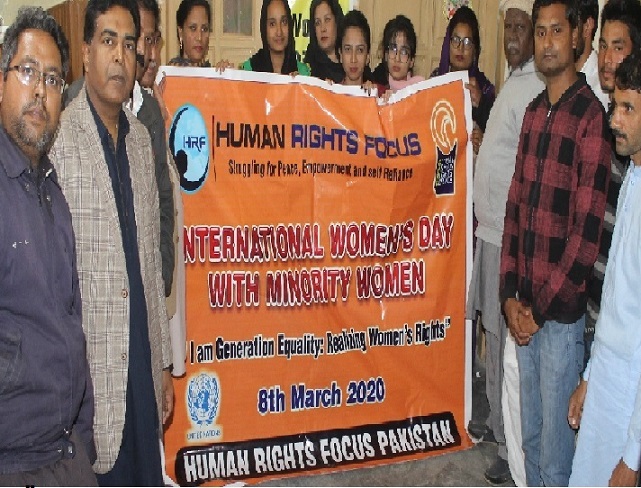 The minority women, girl leaders, students, teachers, lawyers, political workers, CSOs representatives and different stake holders participated and talked about how to create a safe & secure atmosphere for minority women and for tackling challenges being women.

The speakers shared about the UN agenda 2030 of sustainable development goals; the 5th specifically that how to achieve gender equality, empowering all women and girls and about UN vision to “Leave No One Behind”.

Naveed Walter president of Human Rights Focus Pakistan (HRFP) said, today the emerging global consensus is that despite some progress, real change has been agonizingly slow for the majority of women and girls in the world particularly gender equality is a big challenge. The multiple obstacles remain unchanged in law and in cultures. Women and girls continue to be undervalued; they work more and earn less and have fewer choices; and experience multiple forms of violence at home and in public spaces. Naveed Walter said that there is a significant threat of rollback of hard-won feminist gains. Pakistan is included in the country which is performing worst in the empowerment of women and the minority women are more depressed, highly discriminated in education, health, economics, political participation and in every field of life, he added. Naveed Walter said further the minority women are also an easy target of abductions, forced conversions and forced marriages. These women are spending their lives in depressed atmosphere and these alarming issues are going to be worst day by day with the passage of time. He said, if once a minority girl become abducted & forcibly converted to Islam, the parents even cannot meet her nor the government departments helped family and victim because she becomes a “Muslim”. He said around 1000 Minority Women/Girls are facing such human rights violations a year, Naveed Walter added more. He said HRFP fully support a campaign of Aurat March (Women’s March) and condemned the resistance by fundamenlists against women’s rights campaigns including “My Body; My Choice” he added more.

Dr. Fareeha Naeem Youth Coordinator of HRFP shared about the resource’s availability for legal and moral needs during human rights violations and for women’s uplifting. She said by awareness and continues efforts the opportunities could be gained being minority girls’ students and victim women. She invited participants to become a volunteer to help other Minority women/girls as individual and become a part of Net Work for Embowering Minority Women going to be formed.

Shadman John and Nadeem Walter thanked to the participants and said the event organized by HRFP and GHRD aimed to bring together the all stake holders being instrumentals in creating a space for marginalized Minority Women particularly.

The IEC material was also published and disseminated; the Posters on Women Rights with UN theme in English & Urdu “I am Generation Equality: Realizing Women’s Rights.” were also distributed to participants, general public and to authorities, networks and stakeholders.

The Women’s Day celebration was ended by Street Demonstration. The Women and Men carry signs and chants slogans about Women Rights, Minority Women Rights, Gender Equality, Women’s Protection and Justice. The core recommendations were formed and sent to the authorities, decisions makers and media.