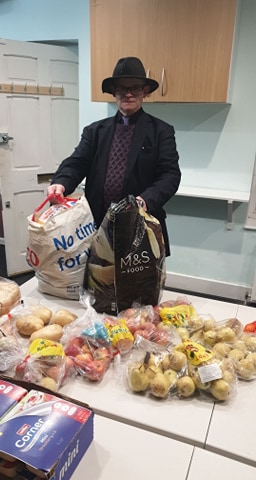 London: A homeless people's support group in Ilford is raising deep concern over the lack of advice and support for charities working with these vulnerable people through the current COVID-19 Pandemic.

British Asian Christian Association has been supporting over 26 people through a 'Meals for the Homeless' project. They have also been helping some of the same individuals and other deprived families in the borough with a foodbank facility.

However, in recent weeks the food being received via Tesco under a 'Fareshare' Charitable distribution has reduced due to the selfish hoarding of a few, that has resulted in panic-buying by the many in supermarkets across the country. Last week contributions to BACA from Tesco almost halved. This left some of the very desperate families that BACA supports without the nutritional support they have come to rely upon.

With the help of Vicar Paula Preston of All Saint's Church, Chigwell the charity were able to give an additional food supplement yesterday. BACA and were able to galvanise some of the homeless people and needy families on their telephone list at short notice. The extra food gift came from the temporary closure of Chigwell Primary School which had been forced to shut down due to staff shortages, as many of the teachers were on self-isolation.

Juliet Chowdhry, Trustee for the BPCA, said: "It was a blessing to receive the gift of food from the school via Reverend Paula, however this was a one off and won't resolve the current crises.

"I was in Costco today to purchase necessary food, kitchen and sanitary products but many were already sold out.

"The panic buying, we have seen in recent weeks shows no sign of reducing, if anything it has got worse.

"Moreover, in the many shops we have visited in our attempts to provision our 'Meals for the Homeless' project we are seeing small altercations, which is an alarming development.

"People's patience will wear thin over time and the government must hold supermarkets who do not control product distribution to account.

"Groups that serve the vulnerable should be given special purchasing rights such as being able to attend the 2 hour 'State Pensioner' opening hours on certain supermarket mornings - especially if they are working with them.

"Funding should be made to homeless charities who are losing their usual food gifts due to this crazy rush for food, medical and sanitary products - to cover their losses.

"Companies charging extortionate rates for products should be fined and made an example of, their greed is destroying the very fabric of our society."

BACA assert that advice from the Government on rough sleepers is mainly for those that provide night shelter facility. However, BACA is concerned that for many charities that simply provide regular food to homeless communities, advice is thin and currently non-existent.

Tomorrow BACA will be experimenting with a new service which will mean that homeless visitors will no longer be fed at their community centre, but outside under a gazebo.

Food will still be prepared in their local kitchen which was marked with the highest grade possible by Redbridge Council's Food safety team (level 5 equivalent to the best of restaurants). Visitors tomorrow will collect their food and drinks outside without entering the BACA building.

Whilst awaiting food one volunteer will be using a small PA system to ensure people awaiting food do not linger in a queue or in single file but spread themselves around thinly, allowing a safe distance between each other that will reduce the potential for infection. All equipment and the gazebo will be sanitized immediately after use.

"Though this is not an ideal situation it seems to be the best we can offer for now.

"As a group we are very aware of how dependent local homeless people have become on our food distribution and we will not leave them to suffer whatever happens.

"We appeal to people of good conscience to show more empathy when they shop or to help us and other local charities with some donations or offers of help."

"We must all maintain our community spirit whatever happens - in the times to come, we will become more dependent on each other.

"For definite before we get over the current pandemic there will be more troubling times ahead.

"May God show his grace to us all."