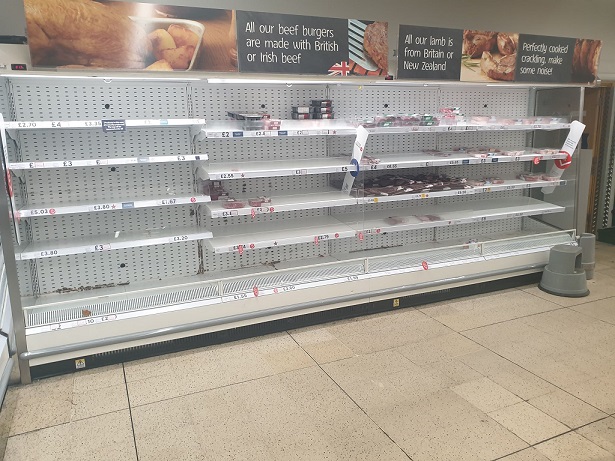 London: British Asian Christian Association is warning the Mayor of London Sadiq Khan and Prime Minister Boris Johnson, that something must be done to brace an unnecessary food crisis. Today an email has been sent to both calling for improved measures to calm the disastrous panic-buying of recent weeks that threatens our economy.

The recent panic-buying across the country has now dissipated to some extent, with queues in shops noticeably smaller. However, a lack of workers in distribution factories has meant that there are still limited stocks for many food and sanitary essentials in stores in London. Reports from our members elsewhere in the UK suggest the concern is nationwide.

Large supermarkets are recruiting as fast as they can to try and thwart a longer-term problem, however supply and demand has now resulted in price rises for items such as meat and paracetamol. With one Asian store in Ilford charging almost triple the price for meat that others store

Worse still local councils have been recklessly sending out their parking management officer to major shopping areas in order to cash in on drivers desperate to buy food from supermarkets with overburdened car parks. With many of those drivers now out of work every single parking ticket will soon become a debt to far for struggling families and BACA is calling for Mayor Sadiq Khan and PM Boris Johnson to intervene.

This parking attendant was seen on Monday 23rd March 2020 after the lockdown had been introduced. No gloves no sanitizer while applying parking tickets that will have to be opened by the vehicle-owner. BACA believes parking enforcement has continued despite lockdown.

Last week BACA sent an email to Redbridge Council's leader and to the local highways team calling for a dispensation for parking restrictions around shopping centres to help these struggling families. No response was received and parking tickets were still being applied to vehicles on Monday despite the threat of infection. Reports from BACA members across Britain suggest that similar supermarket targeting is occurring around Britain.

A silver-lining is the fact that supermarkets over the last week have again been giving to charities that run food-banks and/or feed the homeless over the last week. This is a result of a much-reduced footfall in stores across the country. Over the last 2 weeks our own foodbank survived due to the generosity of a local vicar (click here) and a local (bakers)

Closer inspection however confirms that the recent panic-buying will create more problems if revisited. The sudden peak in shopping in recent week has of meant shops have had to buy above the usual pattern of shopping that results in a least waste. The fact that BACA received 5 trays of unwanted food on Sunday (our biggest ever yield - normally 2 trays) on a bonus collection date and a further bonus tray yesterday, before our usual collection of Wednesday and Thursday evenings, suggests that the sudden drop in customers has resulted in an overspend.

Juliet Chowdhry, a trustee for BACA, said: "I am concerned by the recent spike in shopping that will no doubt have initially provided a boost in finance to local supermarkets, but conversely now places them in a period of lull.

"These supermarkets will have to avoid over staffing stores during quieter periods of lockdown, while also coping with essential staff shortages and the need to spend on recruitment elsewhere.

"The fact that levels of food waste is increasing is of benefit to our foodbank and we are grateful.

"However, this upsurge in food donations illustrates how hard it will be to manage stores through a long-term peak and trough shopping culture that panic-buying induces.

"We are praying for groups like Tesco, Sainsbury's, Morrisons and Iceland as their management of resources has never been more crucial to our nation.

"We are also praying for the many people struggling to pay everyday living costs without their usual income during the lockdown period.

"Never has a foodbank or other poverty relief programme been more essential in Britain and we ask people to pray for the many charities and statutory agencies that are continuing to serve the nations most deprived."

She added: "The waspish use of parking laws and regulations to increase local council revenues up and down the country during this devastating COVID-19 pandemic is shameful to say the least.

"Local Council's should be made to rescind those fines inappropriately taken from struggling shoppers during what has been an emotional and financial nightmare for all involved - if not willing to do so for themselves."