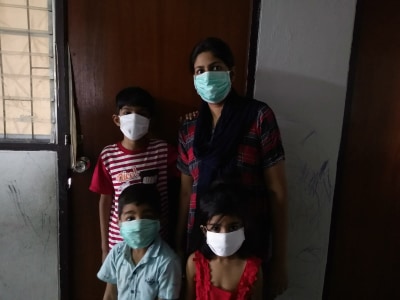 London: Pak-Christian asylum seekers in Thailand are close to starvation due to a Government lockdown imposed in Bangkok since the 18th of March 2020.

So far (26th March) the number of those infected by COVID-19 has reached 1045 cases of which 6 deaths have occurred and 7 people have recovered.

All the recreational places, mall, schools and offices are closed and will not be reopened till 12th April. Thailand’s Ministry of Public health explained today that the sharp rise in confirmed Covid-19 coronavirus cases reported in recent days is due to new testing standards.

Men in Thailand are more likely to be infected at a ratio of 2:1 and most of the patients were found to be in the age range of 30-39 years, followed by 20-29-year olds.

As of March 23, the three provinces with the greatest number of infections were: Bangkok (329), Nonthaburi (47) and Chonburi (30) all major holiday destinations that have been shut down, at great cost to the nation of Thailand, where tourism makes up 10% of GDPR.

Authorities are promoting social distancing and self-isolation but there are still areas where large groups are forming as the Thai people struggle to alter a culture of community.

Survival is becoming a real challenge for the asylum seeker and refugee community in Thailand, most of whom struggle to even pay for their rent on time. The majority of these Pak-Christian asylum seekers were earning only meagre wages, in labour intensive roles - within which they are commonly abused.

The asylum seekers feel helpless because they have not stored any food for themselves for any long period of self-isolation. Thailand a nation which is deeply protective of indigenous citizenship, has not ratified UN treaties for asylum and do not acknowledge the rights of foreigners to seek asylum. This carte blance approach manifests even when asylum seekers or refugees are approved by the United Nations High Commissioner for Refugees (UNHCR). Shopping for food is becoming increasingly dangerous for the unwanted Pak-Christians in Thailand, as fewer people on the streets makes them more visible to Thai authorities. Worse still, a few Thai churches that were providing material help to Pak-Christian families in Thailand have now closed their doors. Sadly, this has removed a necessary source of help to many now beleaguered families and the lockdown imposed is indefinite.

While the current coronavirus pandemic is killing tens of thousands across the globe, the Pak-Christian community of Bangkok fears what will happen to them if they are arrested. This will place them in the high-risk environment of the Bangkok Immigration Detention Centre where infections spread with ease. The current building is small and squalid and a room that can comfortably fit 50 people is crammed with over 100. If one of these detainees becomes infected every one of them will be infected, within a day. They already share communal sleeping/living space, a few toilets and sinks and are forced to sleep across one another - it is a disaster waiting to happen.

BACA has written to the Interior Ministry of Bangkok and asked for the release on bail of all the current detainees in the IDC. But has not had any response to date.

In the meanwhile, an application we have made for the release of a grandmother with a serious health condition has quite conversely, been placed on hold (click here). We are extremely concerned that if Rasoolan Bibi is not released from the IDC that she will become a further victim of COVID-19. Please pray for her and for an end to the current pandemic.

BACA Thailand has helped three regularly supported families by ratifying extra funds this month to pay for necessary food items especially during times when food prices for them have risen and it is doubly unsafe to go out.

Our officer John who himself is an asylum seeker was given an extra allowance too. John is in touch with hundreds of other families that he would like to help.