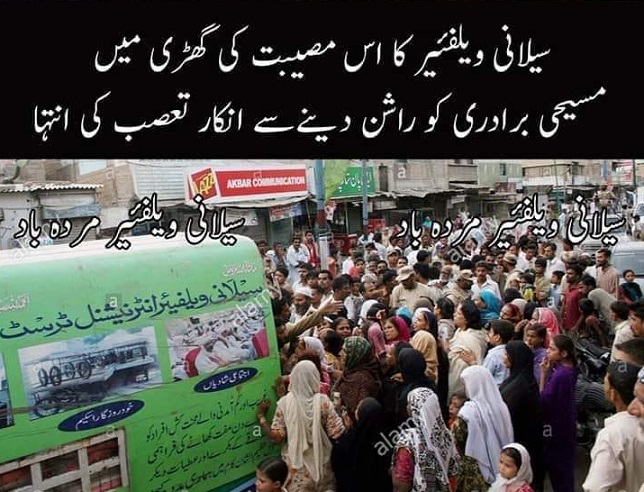 Karachi: During ration aid packages distribution by one of NGO which working with Government of Imran Khan during such event denied packages to Hindus in Lyari area of Karachi and in in District South of Karachi to Christians.

The said NGO is supported by Imran Khan and have launched one site for Public feeding in January in Islamabad. It was announced by Prime Minister Imran Khan during that event that Government shall open such sites with help of that NGO in other cities of Pakistan.

The government have announced billions of Rupees package for people who are under poverty line to face challenges of Corona virus and the said NGO is supported with funds of Imran Khan administration.

45% of Pakistani are under poverty line and make their both ends meet on daily wages and Christians are 9% of this class.

The Muslims are being feed by different NGO and government agencies by Christians and Hindus are refused and asked to leave lines.

The social and religious leadership have protested on social media on such denial on religious grounds during such difficult times when cities are under lockdown and laborer’s unable to find any work to earn their daily wages.

The soil waste management companies of different cities of Pakistan are employees who are Christians and Hindus to clean streets. These workers are not provided with hand gloves, face masks and long shoes which can be under fear of Corona virus.

The government of Imran Khan and Health Minister must provide protective gear to these workers during their job which is important as social media voices are raised on it.

Sooba Bhatti Advocate from Hyderabad writes after incidents of denial of ration to Christians “We Request to All Catholic Bishops of Pakistan, Church of Pakistan's Bishops and other Denominations Bishops, Priests, Pastors and Missionaries, Please Come forward and support your Christian Communities during Lockdown and in their Crucial Times. They are helpless and Needy. We like a Social workers, Political workers and Activists are helping the People. Sanitary workers, HDA Workers, Widows and Daily wagers are waiting for your positive response. On Social Media Saylani organization is not giving RASHAN TO OUR CHRISTIAN PEOPLE. People are saying where they go for help?

Human Right Defender Sardar Mushtaq Gill advocate posts “In this hard time of Covid-19 crisis, Churches of Pakistan must learn to teach their congregations to do businesses and be rich to support needy people as Pakistani Muslim Rich running humanitarian organisations are refusing to give ration/food to Christians. And most importantly Christians business men must help other Christians to do business even at a small level instead to do jobs which can never make them rich enough to support other in the time of need as now all are facing”

Mr. Nazir S Bhatti, Chairman of Pakistan Christian Congress have expressed concerns over denial of ration packages to Christians by government supported NGO and urged provision of ration to all deserving communities during Corona Virus crisis.