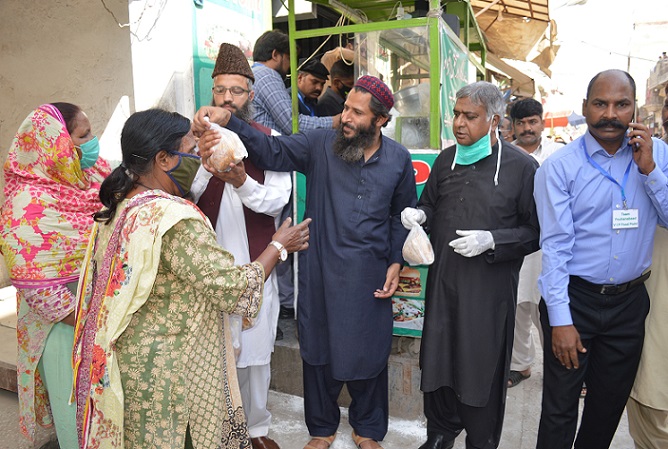 Lahore: (Pervez Yousaf) If we search on google, we find meaning of the word philanthropist “A philanthropist is a person who donates time, money, experience, skills or talent to help create a better world. Anyone can be a philanthropist, regardless of status or net worth.” Then, if we search the philanthropist, we find the names of “big people” of the world and these people belong to top ten, top twenty or top hundred rich people of the world.  We may also find the names of “NGOs” run by influential people of the society at national or international level. During these days, which are the days of calamity, pains, sorrows and fears of corona virus the “deadly virus” that has so far killed more than one hundred twenty-five thousand people around the world and approximately two million are infected. The entire world is under lock down; no business, no manufacturing, no schooling, no public gatherings, no entertainment etc. etc. The economic situation is declining day by day. From day laborers to big businessmen are sitting in the same boat.

This lock down has created a grave situation for day laborers and their families especially in developing countries.  Our country is one of the developing countries as well where 30% people are living below the poverty line.  The government of Pakistan is taking all possible steps to tackle this situation and at the same time seeking help from the international community i.e. developed countries, UNO, IMF, ADB etc. etc. The NGOs and Rich people also helping the deserving people in their capacities.  But it is highly sorrowful to say that under this horrifying situation the Muslim rich community never forget to express prejudice, hatred and discrimination.  One can see queues of needy people at the gates of “generous” people and when they find a “non-Muslim” in a queue they say “this food or money is only for our brethren (the Muslims) you go out from this queue.

Likewise, many Christian citizens of Pakistan Raja Walter was also observing this hatred and prejudice of the rich Muslims.  Raja Walter is a resident of Youhanabad a colony of about one hundred thousand Christian people situated in Southern part of Lahore on Ferozepur road and constituency of a prominent political figure of Punjab.  “Raja” means king, but of course he is not a king, not a rich person, not a big businessman, not an iconic figure or political worker, does not belong to any NGO.  He runs a small food point having good skills of making burgers. He is famous for making delicious burgers and his customers always appreciate him. He is son of a Catechist. He is also owner of a small grocery store in that area.

Due to lockdown all the restaurants/food points are also closed nationwide, but Raja Walter opened his burger point, not to earn money or making business, not to stock the food items to sell on high prices like the clever business people/traders but to provide free food to suffering people who depend on daily income and do not have any other source of income.  His aim is to provide food to all deserving people without any sort of discrimination belonging to any religion, color or caste.

Coming to know about this real Raja (king), a “Raja by Heart” a delegation of National Commission for Interreligious Dialogue & Ecumenism (NCIDE) comprised of Fr. Francis Nadeem OFM Cap, the executive secretary of NCIDE, Sahibzada Muhammad Asim Makhdoom, chairman of the board of Kul Masalik Ulema and Allama Asghar Arif Chishti went to Youhanabad to see and talk to him.  Some representatives of media were also present on site.  This was the day just before Easter Sunday the 11th of April 2020.

Revealing the gesture of love of Raja Walter with humanity, Fr. Nadeem said, “We arrived at his food point at lunch time and saw a crowd of deserving people including men, women and children. Raja Walter himself accompanied by some of his family members was distributing food with full concentration that no one may left with having food”.  Raja Walter told the delegation of NCIDE that he always remembers the miracle of Jesus Christ when He was surrounded by a big crowd and distributed two fish and five loaves among the crowd since it was meal time and no one had with him/her except a small boy who handed over his five loaves and two fish to the disciples of Jesus Christ.  Jesus Christ blessed the fish and loaves and gave His disciple to distribute among the big crowd out of which the number of men was five thousand.  Raja Walter said he does not have support of any NGO, political, religious or social leaders, he himself along with his family members help the affected people by providing free food.  He distributes food two times a day 2 p.m. and 7 p.m.

Raja says that he has one brother, working in Sweden who helps him for this good cause.  According to him his brother advised him not to give up until this time of calamity ends. Raja told this food distribution is for all the needy people. People come and stand in queue to receive food but when I see a Muslim individual or family I invite them and offer seats and tables inside my small dining hall and serve meals honorably.  He highly regretted the role of Muslim rich people who demonstrate prejudice in this crisis.  He also told that some people of his class (segment of community) also come and help him by providing petty amount like Rs. 200/- or 500/-.  He thanks them all.  Raja told the delegation of NCIDE and media representatives that there is a different menu every day including, chicken, beef, vegetable, rice, daal (pulses) and naans (loaves) etc. Raja said that tomorrow is Easter and his entire family will be here to serve food from breakfast to dinner and share the joy of Risen Christ with the suffering people.

The delegation of NCIDE appreciated and encouraged him for doing this great service of the people in need. Fr. Francis Nadeem appealed all the Muslim generous people to help the needy people without any discrimination.  The virus is targeting and killing all human beings throughout the world.  It does not spare believers of any religions, people of any creed, color or caste.  Similarly, all the generous people help all the deserving human beings.

Sahibzada Asim Makhdoom also regretted the expression of hatred by Muslim rich people and urged them to give up such kind negative emotions. He also announced to distribute food among the Christian deserving people along with all the deserving human being.