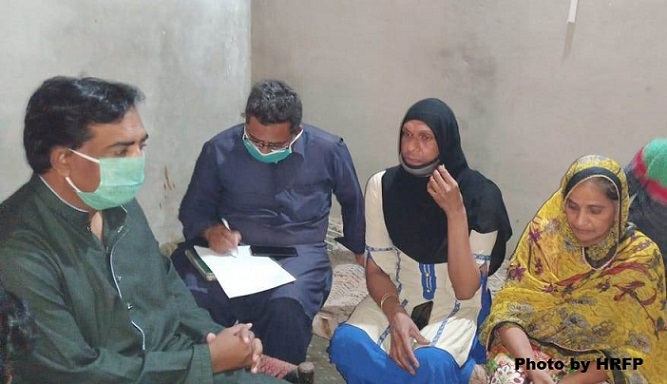 Faisalabad: Human Rights Focus Pakistan (HRFP) demands for continuity of courts proceedings for faster provision of justice and safety measures to minority victims & families including the recent cases of Raees Augustine, Musa Riaz and many others during Covid-19 pandemic.

Raees Augustine a Christian boy murdered during February 2020 working in session courts as sanitary worker by Asim Shah and Wasif Shah while the Musa Riaz alias Simi a Christian transgender is sodomized and murdered my Nomi Butt in April.

Human Rights Focus Pakistan (HRFP) condemned the incidents and raised voice for justice with provision of legal and other possible support to victim’s families and transgender group of Musa belonging.

HRFP Fact finding team came to know by visiting Raees Augustine family that he was murdered on 7th February 2020 in courts premises in evening due to religious and personal conflicts. The FIR was registered on same evening after post-mortem report revealing that it was a murder rather than the perpetrators statement to police about to making it a suicide.

In a same way HRFP Fact finding team met with Musa Riaz alias Simi family and transgender group and collected the facts about Simi’s abduction, sodomization and murdering on 4th April 2020 by Nomi Butt and allies targeted to a transgender belonging to Christian community.

Naveed Walter president of Human Rights Focus Pakistan (HRFP) said that the miseries of religious minorities are multiple in coronas pandemic (Covid-19). The justice process is slower as the 95% judges are on leave but the violations are higher unfortunately. The most recent issues of; Basant Kumar of forced conversion on 12th April in Karachi, Nadia Boota attempting for rape on 11th April in Kasur, Nazia bibi harassment on 06th April in Islamabad, Hindus slum burnt targeting Jalal Bheel on 5th April in Ghotki, murder of Boota Masih on 29th March in Kasur , Bhambo Mai of abduction forced conversion & forced marriage on 13th March in Bahawalpur, Marqus Gulzar killing on 13th March in Karachi, Shaheen bibi attempted for rape on 07th March in Lahore, killing of Saleem Masih on 25th February in Chunian, murder of Akram Waqar Gill on 21st February in Pakpattan, Abduction of Anita Waris on 14th February in Lahore , brutal violence on Azeem Masih on 2nd February in Sahiwal and other recent cases in a process of justice  like  Mehak Masih, Shahbaz Masih & Muhammad Ishaq, Amir Masih, Tabita Munir, Akash Masih, Sundas bibi , Shahnaz bibi, Nasreen Mehmood , Payal Devi, Dawood Shahid, Jagjit kaur and number of non reported nor registered cases has revealed that the criminal mind sets are getting benefits in the situation when state machinery looks engaged to combating Covid-19 and some departments are slower or closed has been justified.

Naveed Walter said that the incidents of murders, rapes, abductions, harassments, blasphemy charges and abuses with Christians, Hindus, Sikhs, Ahamdiyyas and other minorities during Covid-19 pandemic is a question mark on law enforcement agencies that why the biased behaviors are not stopped even in relief services when the human rights violations are also uncontrolled; he added more.