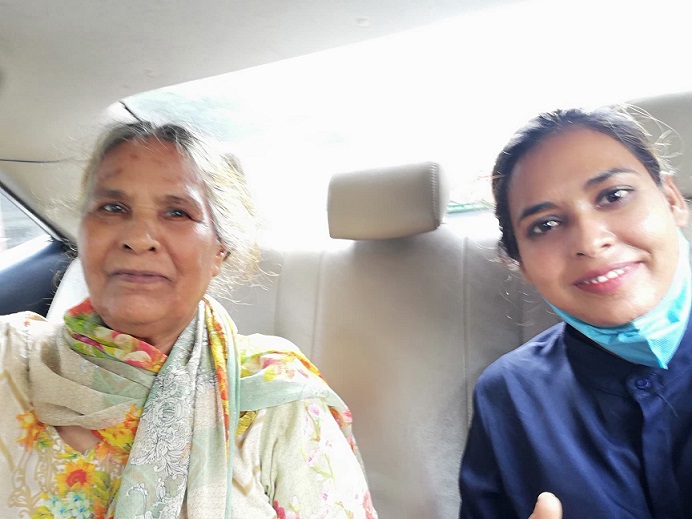 Bangkok: A 63-year-old grandmother Mrs Rasoolan Bibi who was arrested in a crackdown on asylum seekers and refugees in Thailand days before Christmas (19th December 2019) has escaped the brutal detention she suffered in Bangkok's infamous Immigration Detention Centre, Thanks to BACA.

Since Rasoolan bibi's arrest her daughter and only caretaker Amreen Latif faced many difficulties to reunite with her mother. With the help of Thai Lawyer Mr. Wathanin Boon and a grant of 50,000 baht (£1300) she called for release of her mother on medical grounds. The Thai Lawye has also acted as the guarantor of Mrs Rasoolan Bibi.

In a previous article we advised our supporters of a delay in her release due to the COVID-19 pandemic lockdown while she was being tested for the virus. However, after a four month wait following our initial application Rasoolan Bibi was released on the 29th April 2020.

Unfortunately, Amreen’s mother was diagnosed with Parkinsons disease whilst detained in the IDC. Though she was treated by Thai Police Hospital while she was in IDC after pressure applied by the BACA and Thai lawyer Wathanin Boon her health is still poorly. Amreen continues her treatment from the same doctor to ensure proper treatment.

The family shared a message with our supporters: Rasoolan also suffers with Eczema, Arthritis and hypertension and has high blood pressure.

The IDC is notorious for failure to provide healthcare to detainees which has already led to 8 deaths in the IDC.

However in Rasoolan's case we have been able to ensure she was treated and now has her freedom back, through a concerted early intervention.

Amreen, said: "I would like to thank BACA for their trust, for their 50,000 bail money and for their prayers.

"May God bless you and use you more and more for his work."

Hannah Chowdhry, BACA spokesperson, said: "We are grateful to God for his removal of obstacles and for the freedom that Rasoolan is able to experience now.

"It took 4 months and a lot of effort to free Rasoolan and Amreen has been brave and strong throughout, trusting God to reunite her with her mother.

"Being involved in the release of yet another Pak-Christian refugee has been rewarding especially considering the severe health conditions Rasoolan suffers, and her need to self-isolate.

"We continue to challenge the Thai Immigration department to review their current processes and call for immediate release of all detainees the brutal Bangkok and other IDCs."