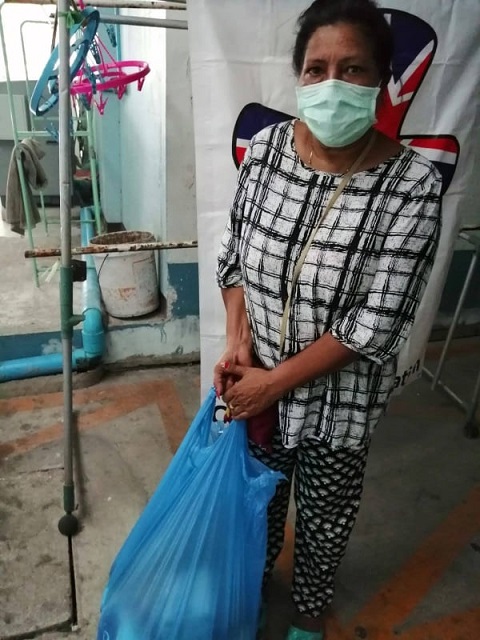 Bangkok: (By Ali Hasnain) The power and devastation of the Covid-19 pandemic has reached far and wide over the past few months, as the globe has struggled with its consequences.

Lock-down is the new normal for millions of people that compounds the misery of the poor in particular the Pak-Christian refugees in Thailand. Though in desperate need and despite the agonies of isolation, There remains a hope in Christ and a belief that sooner or later restrictions will be lifted.

These vulnerable stateless families are under the curfew of the Royal Thai Government. Unable to work they are experiencing extreme financial hardship. Prior to the lockdown some found exploitative work with long hours and low pay - but now that hand to mouth provision is all but gone.

With the whole country under lock-down conditions, it has become tougher for them to get food and other necessities. Most of them feel forgotten by everybody as many of the charities and generous people who helped them are no longer assisting.

British Asian Christian Association (BACA) have continued their help and have been meeting families, many of whom have been near starvation by the time we have reached. A further 15 other asylum seeking families in Bangkok were reached last week bringing our total to 33 families in total. Recipients were given essential food and hygiene items. Included in our deliveries are: Chappatti Flour, Rice, Oil, Spices, Pulses, Detergent and Soap

BACA representative, based in Thailand, John Masih, has been sent to reach out to helpless families during the COVID-19 crisis by delivering food items. He is also offering financial help, paying rent to those families whose adult male members are detained in the brutal Bangkok Immigration Detention Centre, whilst the rest of their families are in squalor unable to work. John said:

“It was a great experience to distribute parcels and sharing the word of GOD among the asylum seekers.

"Thai Police restrictions made the task difficult but by the Grace of GOD we are reaching many families and continue to extend our efforts.

“Desperate families near starvation have been full of gratitude most had no idea where their support during the Covid-19 crisis was going to come from."

Sapna Charles a mother whose husband has been detained for over one and a half years, said:

“I am so grateful to BACA for the love and care they showed, during crisis.

"We the asylum seekers have felt vulnerable and alone, but their work reminds us of God's love”.

Adding to her thanks she said, “I was worried for food but with the help of BACA I have enough to feed myself and my children - BACA made it possible.”

Many Pakistani Christians stranded in Thailand are seeking protection after being forced to flee from their homeland. Amongst their concerns are death threats, blasphemy allegations and violence meted on them, for no other reason than their faith in Jesus.

BACA spokesperson, Hannah Chowdhry, said: "Inevitably in situations like this where a lockdown has been imposed, the poorest families suffer most.

"Families with young children are forced to ration food and many will reach a point of starvation.

"Our little help can only delay that point and provides some welcome relief to struggling families.

"We try to pray and encourage families to and are often reciprocally encouraged by the strength of their faith."

The tourist’s paradise of Thailand has no place for those seeking refuge and if found the whole family, including women and children, will be arrested and placed into unimaginable dungeon like conditions, with only boiled rice and boiled cucumbers to eat, twice a day.

A release fee of 50,000 Thai Baht (£1300) per adult has been imposed by the Thai authorities for the very limited number of detainees they allow to escape the brutality of the IDC. The fee is taken as an assurance the families would not abscond into Thai society but is next to impossible to raise for the underprivileged asylum-seeking families. BACA has been helping many to escape the brutal IDC but is limited financially and by an extremely restricted procedure that allows few the opportunity of freedom.