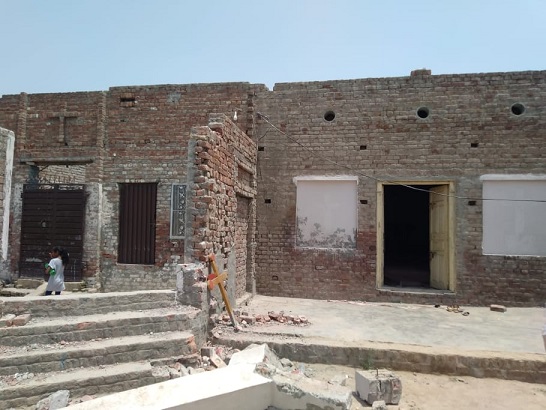 Sheikhupura: A gang of Muslim men took advantage of deserted streets during the lockdown period to break into a church and threaten its Pastor. At midnight on the 9th May, local residents from a small town in Sheikhupura heard men attempt to break open their local church doors by removing it from its hinges. The vandals were taking advantage of the surrounding quiet and deserted streets during the COVID-19 lockdown to break into a detested church.

Aun Abbass Malik and Ali Shan, well-known land mafia gang members, were armed with guns and pistols along with 5 or 6 other men shouting hate speech whilst threatening to set fire to a Christian Church.

The men started by breaking down the front boundary wall and attacking the front main door. They then tore off the wooden cross cemented to the front of the building and threw it to the ground. The men could be heard yelling hate slogans against Christians and the church and threatened to shoot any locals who tried to intervene - aiming their guns at anyone who came close.

Regular worshippers alerted Pastor Samuel Hidayat who was leader of Trinity Pentecostal Church in Ithad Christian Colony, Kala Shah Kaku, Sheikhupura, of 5 or 6 men breaking down the 5ft boundary wall and removing the church front door from its hinges. Pastor Samuel who hold the land registry rights for the property and tells us he has the paperwork to prove this, immediately called the police using the emergency number 15. He said:

"From the descriptions provided to me by local people the situation was very dangerous and I feared there would be bloodshed, so I called the police immediately.

"it was clear these would-be property usurpers were not willing to negotiate or leave our church any other way."

When the vandals heard the police nearing the property, they immediately fled the crime scene. Despite being identified by local witnesses and police knowing the named culprits, no arrests have taken place.

The church itself which has been established over the lat 20 years is a place of worship for 65 families who attend every Sunday. The church has received no previous threats, nor have any of the other 4 churches in the area. It seems as if this attack is simply based on opportunism created by the COVID-19 pandemic and the large-size of the church building.

The gang has issued a warning to the congregation that they will falsify property title deeds to the church property in order to claim ownership of the land where the church has stood for over 2 decades.

Muslim gangs across Pakistan have been successful when bribing authorities in order to illegally wrestle land away from Christian ownership. They are known to also use continual intimidation and threats on minority Christians and to forge documents where original documentation of ownership is lost. Under these circumstances poor Christian property owners are forced into giving up their title in many blatant examples of land grab theft. In extreme cases when Christians who were donated land in city centres to build homes, by departing church leaderships just before partition of Pakistan from India, land-grabbers resort to murder. These land mafia groups are fully aware of existing impunity by way of a bribe and seek to remove the deprived vulnerable Christians from their shanty-type homes from land that is highly valuable due to proximity of city centre. A famous case is that of Archie Dass.

Pastor Hidyat said: “I have been holding church services here from the last 10 years and we never had problems like this.

"We are peaceful community and such incidents exhibit the great intolerance among religious communities which can often result in serious consequences.”

“The congregation gathered every penny to build this church in several steps though it’s still under construction, but we have a place to pray and gather our community here.”

Minister of Human Rights & Minorities Affairs and Interfaith Harmony, Mr. Ejaz Alam, Augustine visited the church and assured the Christian community that they will be served justice and the culprits will be soon arrested.

British Asian Christian Association representative, Edward Masih, also visited the church and has given an offer of prayer support and any other help required.

Despite their fears and threats being made towards them, the brave church congregation attended their regular Sunday service and Pastor Samuel Hidyat preached on how the God of Daniel is standing with them.

So far 4 other churches in the surrounding area of approximately 300-350 Christian families collectively, have not been threatened.

Pastor Samuel Hidyat has registered a First Information Report (FIR) at Kala Sha Kaku Police Station, against the vandals and trespassers, which was presented on the day of the attack. The FIR has listed the following charges against the men involved:

153-A. Promoting enmity between different groups

149. Every member of unlawful assembly guilty of offence committed in

295. Injuring or defiling place of worship, with Intent to insult the religion of any Class

Though the last one is a blasphemy law it is very unlikely that this will be enacted against a Muslim by a Christian due to the lower value applied to the Christian faith in Pakistan.

British Pakistani Christian Association has gifted the church £100 and is have not been asked to help further because a lot of support is coming from the local community including politicians. We however, ask our supporters to keep this situation in their prayers.

Mehwish Bhatti, our National executive for Pakistan, said: "The Government should take strict action against the perpetrators of this attempted land-grab.

"Failure to do so, creates fear in local congregations and takes away their freedom to practice their faith.

"Such freedoms are enshrined within the UN Human Rights Convention which Pakistan has subscribed to and must adhere to.

"We pray for a quick resolution." British Asian Christian Association, strives to raise awareness of the persecution of the global South-Asian Christian community and to provide aid to them where possible.