Pakistani Christian man accused of blasphemy by his wife and daughter 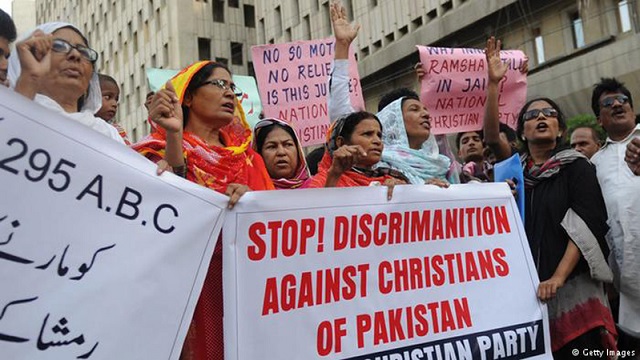 London: A wife and daughter have accused their husband and father, respectively, of committing blasphemy.

Pakistani Christian man Anwar Masih from Lahore has been charged under blasphemy law 295-C for uttering blasphemous words in the respect of the Prophet Muhmmad (PBUH).

On 2nd June, Civil Line police station, Lahore registered a case against Masih. According to the first information report (FIR) the complainants are Anwar’s wife Kausar Parveen and his daughter Samreen. The police have confiscated their phones which allegedly contain evidence to prove that he has committed blasphemy.

This is perhaps a first case where the wife and daughter both are witnesses against the husband and the father.

According to our initial reports Samreen and Kausar both were running a beauty parlour in Lahore, and Samreen had affairs with a Muslim man, Akash Maqsood, for the last few years.

She is now married to him and eight months pregnant. We were further told that she was converted to Islam too, while Sameen’s father was unaware of the all these matters.

He was kept in dark and never told either by his wife nor his daughter about the marriage and conversion to Islam, but when Masih came to know about all these matters he was shocked and got furious that his wife and daughter kept him in the dark. Many would say his reaction was natural.

We were told that it was not that he was just shouting and abusing his daughter and wife, but that he alledgely abused Islam too and it is all recorded on his daughter’s phone which has been confiscated by the police and now is a part of the record and will be produced in court when the court hearing starts.

The police have kept Anwar at an unknown place for security reasons, but we hope that soon he will be sent to jail.

The mother and daughter have also left the house and are hiding at an unknown place.

Nasir Saeed Director of CLAAS-UK said: “This is shocking news for me that a wife and daughter have both gathered to witness against their husband and father and complained against him to the police.

“Perhaps this is the first case of its kind in Pakistan as normally such cases are reported by the Muslims, who have rivalries or wanted to settle personal scores. Complaints to police from Christian family members is unbelievable and shocking.

“This is another example of the misuse of the blasphemy law where a daughter gets rid of her father, and a wife her husband, simply because he cannot accept what they have done.

“The whole situation seems pre-planned, but it is too early to say anything as we are still trying to collect the facts.

“It is sad as no matter whether it was pre-planned or not, the fact is that Masih will have to wait years and years to prove himself innocent and has no future. Even if the mother and daughter regret their decision, the family has broken, and it will never be the same again.”