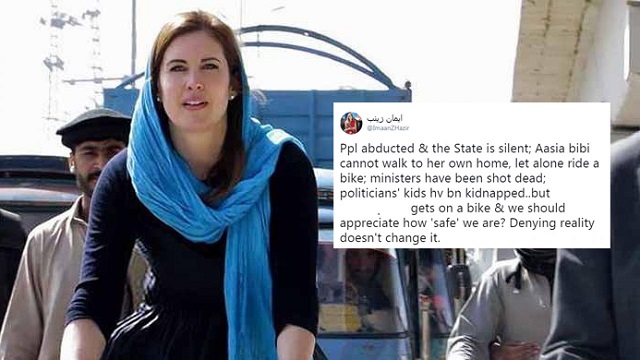 Faisalabad: Human Rights Focus Pakistan (HRFP) welcomes the submission of Ministry of Interior (MOI) positive report to Islamabad High Court (IHC) on 17th July 2020 that American blogger, journalist & writer Cynthia D. Ritchie is not involved in any anti-state or illegal activity and can stay more as per the law as the proceedings is continue in IHC including yesterday hearing.

Since beginning of issue HRFP had called for an independent judicial probe on her statements for her rape/sexual assault accusations and demands for free & fair legal proceedings but the threats and blackmailing attempts are still continue and she has shared through her twitter account and in recent interviews.

HRFP always deeply acknowledge the foreigners’ services in social & economic up lifting through different sectors as like Cynthia D. Richie contributed for increasing a soft image of Pakistan by writing, speaking and video documentaries who living in country above decade and have seen always stood in support of Pakistan, share world about hospitality of people, food, history, culture, diversity and many other positive values about love & beauty through her blogs and productions.

Naveed Walter president of HRFP said that the women’s harassments issues are not new but in Pakistani culture and male dominated format the women does not speak more boldly and mostly discouraged if anyone raised voice against such abuses. For us Cynthia D. Richie is not only a voice of an individual but a step by woman who may follow by others, he added.

Naveed Walter strongly condemned the intimidations against Cynthia D. Richie in reaction for her stand against abuses she stated. He said the voice she raised in a country where misuse of power is common and injustice is a routine should be denounced but unfortunately whenever the women victims speaks they face demoralization and personal attacks also, he added. The amusement of power should be discouraged, injustice should be investigated and protection should be provided to her, HRFP added more.