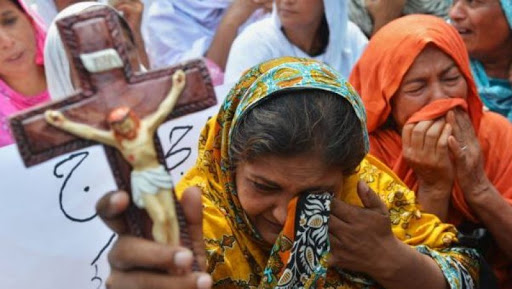 London: A Christian man, Sohail Masih from Abidabad, Nowshera Virkan has been charged with committing blasphemy.

He has been accused of insulting Islamic personalities on Facebook. According to reports as soon as the police came to know about this, they arrested him on August 5 and took him to the police station.

But as soon as local people become aware, they started gathering in front of the police station where Sohail was being held.

When it became known that a case had not been registered against Sohail the crowd was enraged, and some of them forcefully entered the police station and exchanged angry words with police.

Finally, on the complaint of Abdul Sittar Qadri, the police registered the case, and he was charged under sections 295-A and 295-C of the Pakistan penal code.

Local Christians are scared, keeping in view the past mayhem in Gojra, Sanglalhill and Joseph Colony, where infuriated masses attacked and burnt several houses, churches and even killed several people. But the police has been deployed for their safety and we have received no further information about further damage in the area.

Recently the Punjab Assembly passed the Tahaffuz-e-Bunyad-e-Islam (protecting foundation of Islam) Bill prohibiting the printing and publication of objectionable material. The Directorate General Public Relations (DGPR) was given powers to visit and inspect any printing press, publication house, bookstore and confiscate any book, at any stage of printing, which has blasphemous material. Several human rights activists and Christian leaders have already expressed their concern about this law.

In April the Punjab government made teaching of the Holy Quran with translation mandatory in all provincial universities, and a notification has been issued by the provincial government recently.

Nasir Saeed, Director of CLAAS-UK said: “This is not the first case of its kind, and several Christians like Imran Nadeem, Nabeel Masih and Patras, Kaleem and Qamar David (died in Jail)  have been charged with blasphemy for sharing or having blasphemous contents either on their phone or on their computers.

“It is difficult to prevent the abuse of social media platforms like WhatsApp when others can easily harass Christians and ‘plant evidence’ on them.

“An example: if someone shares blasphemous content to a Christian’s page, this could result in blasphemy charges against the Christian, even if the Christian did not directly interact with the content.

“It is a very worrying situation as the misuse of the blasphemy law continues to rise and instead of taking steps to stop its misuse, the government continues to pass legislation which makes the existing law more stringent. Because of silence and inaction from the government, people are taking the law into their own hands and even many have begun to believe that killing a blasphemer is their religious duty, as we have recently seen with a man being shot dead in a Peshawar court room, with the killer being hailed a hero of Islam.

“The police is often threatened into registering a case against the alleged blasphemer instead of letting them conduct a proper investigation.

“But hardly anyone has been brought to justice  Such inaction from the government encourages people to take the law into their own hands and decide the fate of the alleged blasphemer there and then. In 2015 Justice Asif Saeed Khosa said, ‘Will it not instil fear in the society if everybody starts taking the law in their own hands and dealing with sensitive matters such as blasphemy on their own rather than going to the courts’.”

Justice Dost Mohammad Khan also stressed the need for exercising restraint because blasphemy accusations were serious and prone to misuse.

Allowing individuals to deal with such matters on their own is fraught with danger, especially in divided societies like ours, where even ulema are reluctant to offer prayers with members of other schools of thought, he observed.

Nasir Saeed further said: “Pakistani society has become more and more indolent and I see no future for the religious minorities in Pakistan.

“The Government must take appropriate actions to stop the misuse of the blasphemy law and stop people taking the law into their own hands.”