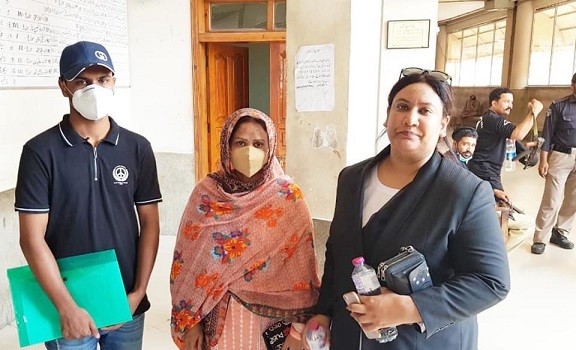 Peshawar: Nadeem Joseph, a Christian man shot to wounded and then death afterwards in Peshawar city of KPK ON 2nd  June 2020, when he was at home and he was attacked on his door and the attackers also opened fire at the family when, Elizabeth Masih Joseph’s Mother in law was also short in arm and brother in law Babar shot in the leg but survived lately. The incidence took place at Sawati Phatak Colony, Peshawar, because Joseph bought a house in a Muslim neighborhood and it was unpleasing for the Muslims to live among a Christian in their colony, as Christians and other non-Muslims are kafirs and hence it’s important to remove them from the society.

Although the whole neighborhood was against Joseph and his family but the most concerned family was Abdus Salam Khan’s family as they were the immediate neighbors of Joseph. The matter started to take effect immediately when Joseph and his family shifted in their newly bought house and out of courtesy Salman khan and his father Abdus salam went to see them and know about them. Upon knowing that they are Christians the hatred sparked in their eyes and they clearly told Joseph that he should not be living among Muslims because they have never wanted any non-Muslim Chura to live among them.  For days, Khan and his sons Salman and Suleiman harassed Nadeem Joseph and his family, his sons named Abadish (20 years) and Ephrahim (18 years) threatening serious consequences if they did not leave the house.

Abadish Nadeem: Abadish the eldest son of Nadeem Joseph said that, on the night of occurance i.e.2nd June 2020, I came home at about 10:00pm, when Salman and Suleiman stopped me on my door step. They asked me why am I riding bike at this time and why are we still at home until now. They abused me, harassed me and threatened me that if we don’t leave the house in the given time, they will kill all of our family. As “you are filthy Christians and, we don’t want such kafirs and creepy creatures in our neighbourhood. I was scared and shattered, I went inside and my father asked me what happened. I told my father about the abuses and threats they gave me. My father went out to talk to them, but it seemed that they already planned for violence. They held my father from collar and didn’t even listened to him. They dragged him in the middle of the street and strangled and beaten him up. Meanwhile a woman came out of their house and handed them over a gun which suleman held and opened fire at my father, the fire struck his abdomen and he fell down, my grandmother Elizabeth, my uncle Babar lal, my aunt Rukhshanda who were visiting us ran out of our house along with my mother. We all ran towards my father who was lying on the street and blood was rushing out of his wound, but the culprits along with their accomplices were kicking and strangling my father. My grandmother went forward to save him, considering that they will not harm an elderly woman but they brutally dragged her and fired a gunshot that struck her shoulder. My uncle went running towards my grandmother and they shot him in his leg. My aunt rukhshanda and my mother fell in their feet and begged them to spare our lives. They put the gun on my neck and told us that they will be happily kill all of us if we don’t leave the house immediately. We promised to leave the house and then they left. No body from the neighborhood intervened instead they were watching us with so much hatred in their eyes that I can’t even explain.

We called the ambulance that took my father, my grandmother and my uncle to Lady Reading Hospital, where he lost his life after about one month.

However, there are certain people and media officials who are portraying this incidence as a regular crime rather than a religious intolerance, “trying hard to save Government from such unnecessary hastle”. Joseph had also approached police for help, but to no avail. Following the incident, police arrested a number of family members of the accused who managed to flee from the scene. According to Joseph’s wife Shaheen Nadeem, they used to fear the attackers may also harm other family members, she also said that from the day of occurrence many people in the name of Christianity and brotherhood visited us, called us, took photos, videotaped us but, “My heart bleeds when they are all frauds, nobody cared to help us in courts, no body fought for us or for the justice”. She requested international community to open their eyes, she asked whether “if only pictures are enough to serve us Justice”. This is very sad and indeed unfortunate that people use other’s pain for their own benefits. The Police arrested Salman khan along with the murder weapon, but later he was released on the basis of no evidence. Police did not recorded the statements of the family/witnesses and is working in connivance with the perpetrators. The bails of both accused are pending in sessions court Peshawar and the next date of hearing is 04-08-2020. Please keep Joseph and his family in your prayers and also keep The Voice team in your prayers as well because there are life threats to the family members and to the lawyers who would present Joseph’s family.