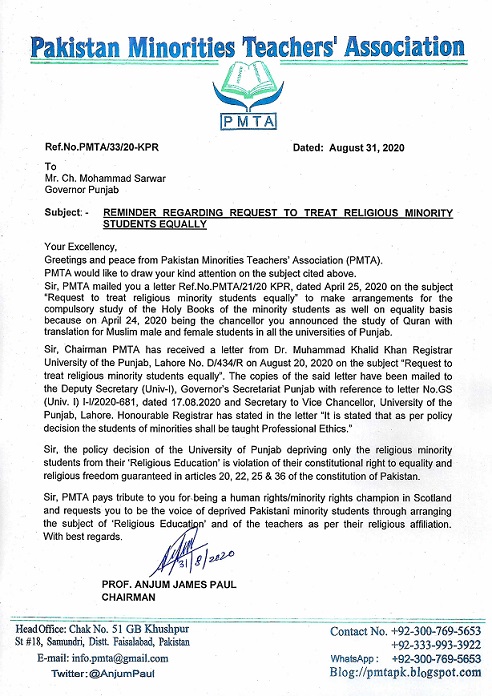 Faisalabad: Professor Anjum James Paul Chairman of Pakistan Minority Teacher Association PTMA sends a reminder to Ch. Mohammad Sarwar about treatment towards Religious Minority Students with equality. The PMTA is a leading organization which is struggling in Islamic Republic of Pakistan about equal opportunities and rights of religious minorities students.

Herewith we are presenting his reminder to government of Punjab:

Sir, PMTA mailed you a letter Ref.No.PMTA/21/20 KPR, dated April 25, 2020 on the subject “Request to treat religious minority students equally” to make arrangements for the compulsory study of the Holy Books of the minority students as well on equality basis because on April 24, 2020 being the chancellor you announced the study of Quran with translation for Muslim male and female students in all the universities of Punjab.

Sir, Chairman PMTA has received a letter from Dr. Muhammad Khalid Khan Registrar University of the Punjab, Lahore No. D/434/R on August 20, 2020 on the subject “Request to treat religious minority students equally”. The copies of the said letter have been mailed to the Deputy Secretary (Univ-I), Governor’s Secretariat Punjab with reference to letter No.GS (Univ. I) I-I/2020-681, dated 17.08.2020 and Secretary to Vice Chancellor, University of the Punjab, Lahore. Honourable Registrar has stated in the letter “It is stated that as per policy decision the students of minorities shall be taught Professional Ethics.”

Sir, the policy decision of the University of Punjab to deprive only the religious minority students from ‘Religious Education’ is a violation of their constitutional right to equality and religious freedom guaranteed in articles 20, 22, 25 & 36 of the constitution of Pakistan.

Sir, PMTA pays tribute to you for being a human rights/minority rights champion in Scotland and requests you to be the voice of deprived Pakistani minority students through arranging the subject of ‘Religious Education’ and of the teachers as per their religious affiliation.

PMTA is making efforts since 2004 for education reforms through advocacy, lobbying and analyses on the textbooks of Pakistan to promote diversity and peaceful coexistence through the Pakistani education system. Pakistani religious minorities are not enjoying fully constitutionally their civil and political rights and they are facing challenges of equal citizenship, equal rights and equal opportunities. Due to religious persecution lives, beliefs, families and properties of religious minorities are always at risk. Pakistani public sector education system promotes violence, intolerance, hatred and extremism through the language and images of the textbooks against non-Islamic religions, non-Muslims and non-Islamic Civilizations. Thus, Pakistani religious minorities become the direct target of the intolerance and extremism that Pakistani education system promotes.