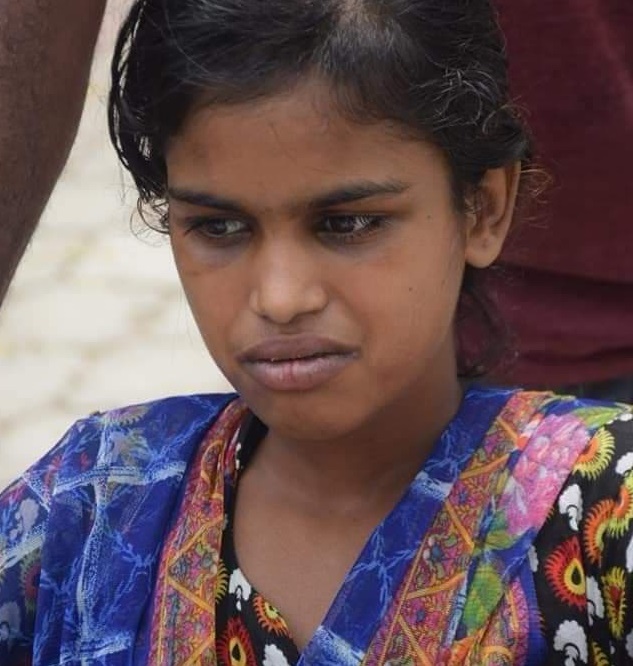 Lahore: On July 12, 2020, Anika Shehzad aged 16 years resident of Wandala Diyal Shah in Sheikhupura, began work as a house maid, at the home of a Muslim landlord Naila Bibi (32 yrs) resident of B.Block, Multan Road, Lahore. The employment had been organised by a woman in the same village as Anika named Maqboola Bibi (56 yrs), who herself was a relative of Naila.

During the time of her employment no communication was permitted between Anika and her parents, despite her young and vulnerable age and this cause great anxiety to the parents of Anika.

On 12th of August 2020, Maqboola contacted the parents of Anika and asked them to come and meet their daughter. Excitedly the parents washed themselves and changed their clothes, and rushed to Maqboola's home to lay eyes on their daughter who had been away for a month. However, when they arrived at the home of Maqboola they were shocked at the state of Anika.

Mother Khalida (34 yrs) rushed to Anika tearfully to tend to extremely visible slash marks on her daughter's arms. Even worse as she got to her daughter, she suddenly saw the vivid marks of where chains had been around her swollen anklets. The predicament of Anika brought both mother and daughter to tears and the wept loudly as the shock hit Khalida. Anika has told our new Operations Manager for Pakistan Hanook that in that moment that her mother met her, she realised her sorry-state but sensed she was now with someone who would protect her.

Anika was unable to walk and had to be brought to Maqboola's house by car in despair, Khalida asked Maqboola what had happened. Naila told Khalida that Anika had been attacked in this way as she had stolen 5000 pak rupees.

Kahlida has told us that she shouted at Maqboola at that point: "Such evil violence, this horrid cruelty for the theft of 5000 rupees?"

Naila replied: "Choora's (a derogatory word for Christians) can never be trusted and don't deserve mercy"

Maqboola and others asked Anika to state her account of what had caused her brutal treatment. Anika explained:

"While at the home of Naila, I kept pleading to have contact with my parents, but Naila kept evading me on this matter.

"When I insisted, she turned harsh towards me.

"I told Naila that I did not enjoy the work and that on completion of one month I would be quitting.

"At this point Naila became furious and started yelling at me shouting abusive names and expletives, about me, my parents and the Christian faith."

Naila Bibi, in high dudgeon, leapt towards Anika in an attempt to hurt her more, but was pacified by others there. At the house of Maqboola Bibi, Khalida was threatened by Naila and her compatriots to not to take the matter any further. She was told in no uncertain terms that the cost of taking any action could result in the loss of everything she owns and her life. She was warned that as a Christian she had no rights and that no-one would listen to her, besides she was poor and Naila could afford the best solicitors. She was told the nation of Pakistan belongs to Muslims and not Kaffir.

Khalida managed to take Anika home using a rickshaw as she was not able to walk.

Two days later, on 14th August 2020, the culprits of the attacked registered an application for a First Information Report (FIR) against Anika for stealing 5000 Pak rupees and added a further loss of 20 gm of gold, which they state Anika took from the house of Naila Bibi. The application was filed in Chung Police Station.

Without taking into account the age of Anika and the fact that she was always in the control of the wealthy Muslims she worked for. Police allowed the registration of an obviously false FIR. The fact that she would have known no-one in the proximity of the home to whom she could sell the gold and could not have easily hidden money from the landlords, which would have removed any such motivation, was ignored by a very ignorant and naive police force.

On 18th of August 2020, when Anika's already unstable medical condition worsened, she was taken to Mian Munshi Hospital where she is under treatment for.

The next day, the victim's family was called to Chung Police Station to answer against the allegations filed against Anika. BPCA team accompanied Anika's parents to Police Station and helped them register their own FIR application (Chung-8/19/2020-7539) against the violence and cruelty of Naila and her household. BPCA is seeking charges to be laid under the Protection of Women Act and Domestic Violence Act. We ensured the testimony of Anika was recorded as an official statement by Chung Police.

Later in the day investigation officer, Muhammad Ashfaq A.S.I, called for a conciliatory meeting between Anika's family and the household of Naila. Muhammad Ashfaq recorded the statement of Maqboola Bibi who admitted that Anika had been subjected to an extremely brutal attack. Naila was hostile to the presence of Khalida and when she heard the mother asking for justice for her daughter, she began calling her a whore and Choorah and flung her arms at her attempting to intimidate her until the police intervened.

Anika has been referred to MAO Hospital Lahore for further treatment and is being treated for Post-Traumatic Stress Disorder (PTSD), nausea and fibromyalgia.

The BPCA team visited Anika in the hospital and she has confided in them that strangers around her now terrify her. She told BPCA,

"It was hell and I lived it.

"They chained me, stopped me from contacting my family and assaulted me.

"Attempts were made to coerce me to leave my faith.

"I was chained for days, and my anklets vividly carry their marks.

BACA are helping Anika and her family through the process of gaining justice are offering her and her family ongoing support by liaising with the Police.