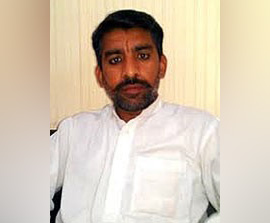 London: Zafar Bhatti a victim of Pakistan’s notorious blasphemy law was sentenced life imprisonment in 2012 after falsely being accused of sending blasphemous messages, from a mobile SIM that was not even his.

Since his imprisonment, Zafar Bhatti has been living in the misery of a dark, dingy room in chambers set for solitary confinement. For many years he has had no contact with other prisoners and only ever meets with cleaners, who he has short conversations with when they are on duty. His acquaintance with prison wardens is simply receiving the barking of orders and his frail and unwell wife but extremely loyal and loving wife, Nawab Bibi (71 yrs), visits once a quarter or the prison wardens. Alienation and depression have already dissected his soul. His hope lives only because of those precious visits from Nawab Bibi and the prayers the two of them hold together.

Zafar has been filed for his appeal hearing to be expedited several times, based on his poor health several times, but despite his declining health caused by the severe diabetes and several heart attacks, he has had to suffer the ignominy of 7 court postponements (click here), as Judges felt it more important that they enjoy a sunny holiday. To many, it seems the number of adjournments based on non-arrival of a Chief Justice is based on an irreverent hatred for Christians. Certainly, it took Asia Bibi to have her day in court, whereas Bollywood actress Veena Malik had her blasphemy charge dropped in a matter of weeks (click here) - so it is possible. We have no issue with blasphemy charges against MS Malik having been dropped, but remain perplexed at the length of time it takes for innocent Christians to be released.

The Pakistani judicial system has provision to grant bail to prisoners on medical grounds even those who have committed heinous crimes, but Zafar is finding it hard to get bail for his serious health conditions. He has also been left stranded by ignorant officials who continue to evade his appeal hearing.

“The denial of bail despite Zafar’s declining health is an obvious case of bigotry by the officials” said Nawab Bibi.

On 3/09/2020, Zafar Bhatti’s health dropped to a critical situation after a severe heart-attack. Despite a series of previous near-fatal heart attacks and the obvious pain he was suffering, prison wardens failed to take zafar to a hospital. A very concerned Nawab Bibi has also stated that Zafar was not even given any medical treatment at the prison, and he is only now alive, thanks to the grace of God.

That same night, BACA sent our Operations Manager to visit Nawab Bibi, who was completely broken and unable to find any peace in her heart knowing her husband was in critical condition without any help. She said:

“I prayed all night when I heard about his condition, I was on my knees and God answered my prayers and saved him.

"My own health has deteriorated since then, how can I rest when I know my life partner is in pain.

"This Pak-Authorities have kept me away from my husband for 8 full years now, it is for this that both of us are so ill.

"He was my support and strength and a prayerful man.

"No clemency has been shown for Zafar despite his weakened state, yet murderers pay for their freedom.

Nawab Bibi has spoken about her difficulties living as a single elderly woman in a patriarchal country. She thanked BACA for stepping in and filling the gap to ensure she has had food on her table and a roof over her head. Moreover, she expressed gratitude for the medical treatment we have paid for to keep her alive long enough to keep up the campaign for Zafar's freedom.

Zafar’s counsel Tahir Bashir, has advised BACA that he has already filed an application for bail on medical grounds. He said he was waiting for the court to give a date for a hearing, so he can enact a debate that will see Zafar home to be back with his wife.

“I am very hopeful that Zafar will be granted bail on medical grounds.

"He meets the legal requirements and is deserving of an escape from his unfortunate and unfair incarceration."

Zafar Bhatti will now have his next hearing for bail on Monday 19th October and he has asked for Christians across the world to pray for Grace and Favour for him.