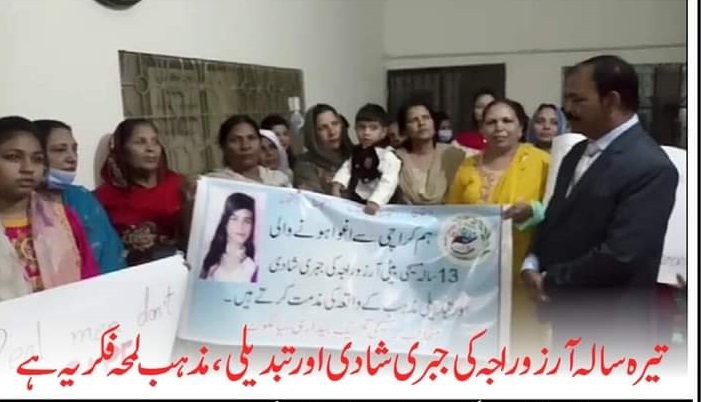 London: The Sindh High Court of Pakistan has given custody of a 13-year-old Christian girl to her Muslim abductor.

Witnesses said the teenager, Arzoo, arrived at the surrounded by dozens of Muslim women and men so she could not leave, and no one could reach her.

Therefore, when she arrived at court and tried to run to her mother, her husband, Azhar Ali, held on tightly to her arm, preventing Arzoo from reaching her mum.

Her mother was also not allowed to meet her daughter and was only allowed in the court room when her solicitor arrived and insisted on taking her into the court room.

Witnesses report that the judge did not bother to inspect the paper to check her age, but said in his order that the petitioner initially belonged to the Christian religion, but after passage of time she understood and realised that Islam was the universal religion and had asked her parents to embrace Islam but they flatly refused, subsequently she accepted Islam before the religious person of Madrassah Jamia Islamia in Karachi.

Her new Islamic name became Arzoo Fatima and she entered into marriage with Azhar Ali of her own free will, the judge ruled.

He further asked to for a notice to be issued to the Advocate General Sindh, that no arrest be made in respect of a FIR registered against Azhar and his family members and asked the police to provide protection to the newly wedded wife.

Arzoo had been missing from her home since October 13, according to the First Information Report (FIR). Her father, Raja, told police the 13-year-old was kidnapped from the family home in Karachi's Railway Colony, shortly after her parents went to work.

Two days later, police summoned the family to say the abductor, Azhar Ali, a 44-year-old Muslim, who was already married with children, had produced a certificate of marriage to Arzoo, which said she was 18 and had converted to Islam.

Raja said one problem was that two of the abductor’s brothers were employees with Sindh police.

Nasir Saeed, Director of CLAAS-UK said: “It is a very sensitive matter for Pakistani Christians but sadly it is all falling on the deaf ears of the politicians and the authorities.

Pakistani Christians are protesting throughout the Pakistan as well as other countries for the safe return of young Arzoo but still there is no hope especially when the court has given her custody to her abductor.

“It is sad as the Pakistani police and courts have failed to respect their own laws, as well international standards, which are continuing to be ignored especially in forced conversion and forced marriage cases even in the higher courts.

“Very often young girls are threatened into giving statements to the court saying they have married and converted to Islam of their own free will.

“But recently we have seen that two girls, Maira Shahbaz and Mahwish, who gave the same statement under duress, escaped their kidnapper and are living in hiding.”

Mr Saeed further said that for the last few years forced conversion and forced marriage cases continue to rise, the government is aware of the situation and about the concern of the religious minorities but not willing to bring legislation to stop this situation, and has failed to punish those who are involved and encouraging the kidnappers.

He said the government must pay attention to this burning issue, interfere in Arzoo’s case and ensure her safe custody to her parents. He said Pakistan is already known for the ill treatment of its minorities, and therefore for the last several years, Pakistan has been included on the UACIRF’s blacklist of countries that violate religious freedom, ramping up pressure over the treatment of minorities in the country.

Dr. Emmanuel Adil Ghouri leading protest demanded immediate handover the Christian teen to her parents and arrest of Muslim kidnapper according to FIR.

According to Pakistan Christian Post reports every year more than 1000 Christian and Hindu girls are abducted by Pakistani Muslims in Islamic Republic of Pakistan.