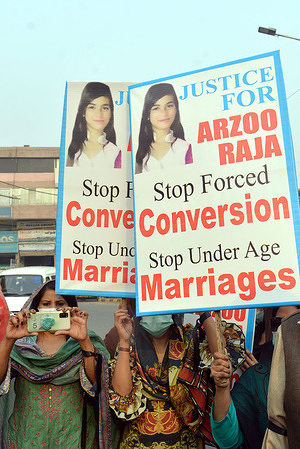 Karachi: Human Rights Focus Pakistan (HRFP) demand justice for Arzoo Raja a juvenile Christian girl aged 13 of Karachi was abducted on 13th October 2020 by a man Ali Azhar aged 44 and her parents were informed by local police station on 15th October in response of FIR No. 302/2020 under 364-A PPC that she has converted to Islam and got married with same man.

Naveed Walter president of Human Rights Focus Pakistan (HRFP) said that the minority girls particularly the Christian and Hindus are forcefully converting to Islam and marrying with Muslim men in a same form and routine since longer. The minority girls first become abducted and mostly the local police stations where victim’s family submits the complaints about her missing, informed about her conversion to Islam and getting marry with same abductor. The same day’s abduction, conversion and marrying is a common practice in such cases and it has happened with Arzoo also in a same sequence, he added.

HRFP fact findings team brought the facts that in proceedings of Sindh High Court dated 27th October 2020 her all record was altered including age stating18, statement of her free will marrying & embracing Islam, replacing Arzoo’s picture on legal documents (raised point by her mother Rita), moreover in court premises Arzoo tried to come to her mother but she was stopped by Ali Azhar and allies in police shield while on 15th October 2020 the Judicial Magistrate of Police Station Frere area was reported by SI Haji Muhammad Iqbal on behalf of Police Station AVCC/CIA that after the investigation was transferred to them they found that Arzoo’s age is 13 and they have enclosed the supporting evidence that she is minor girl , then why it has been ignored by              Sindh High Court ?

Naveed Walter said that the age of girl is 13 and it is proved by school record /certificate, NADRA’s B-form mentioning her D/O/B 31st July 2007 and Church register with same age but she is falsely presented as adult in court including at conversion certificate of Madressah Jamia Islamia & marriage certificate with her new name Arzoo Faatima.

Naveed Walter said that the Sindh Child Marriage Restraint Act 2014 raised the legal minimum age of marriage 18 the act a punishable offence while in a context of international human rights standards the Pakistan ratified the Convention on the Rights of the Child in 1990, which sets a minimum age of marriage of 18, and the Convention on the Elimination of All Forms of Discrimination against Women (CEDAW) in 1996, which obligates states to ensure free and full consent to marriage and being a member country of the South Asian Initiative to End Violence Against Children (SAIEVAC), which adopted a regional action plan to end child marriage from 2015-2018. Moreover, the Representatives of the South Asia Association for Regional Cooperation (SAARC), including Pakistan, asserted the Kathmandu Call to Action to End Child Marriage in Asia in 2014. As part of its commitment and signatory to international rights treaties Pakistan have to ensure access to legal remedies for child brides and establish a uniform minimum legal age of marriage of 18 , but there are no listening’s nor implementations unfortunately.

Human Rights Focus Pakistan (HRFP) assists victims and raise voice for justice through local and international forums urging the Federal & Sindh government for intervening, Supreme Court of Pakistan for suo-motu and authorities for immediate actions responsible for defending religiously victimized, free & fair trials, in relation with justice only and not for religious affiliations by police, politicians and judicial authorities, Naveed Walter added more!