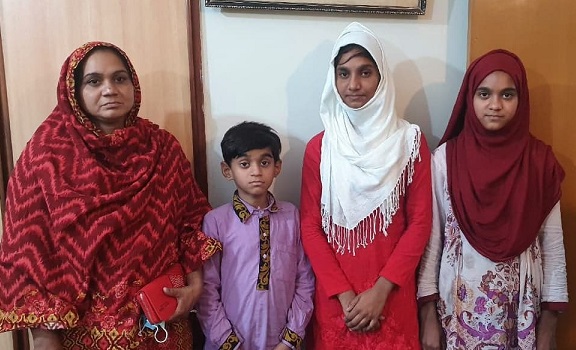 London: November 18, 2020. Earlier this year, on 16th March 2020, BACA reported on the dithering police that failed to take action after a 17-year-old Christian teenager whis both deaf and mute, was kidnapped from her home, then forcibly married to a Muslim neighbour under a sham Islamic marriage.

Police at Sanda Police Station, Lahore failed to take action despite registering a First Information Report (FIR) 405/2020 on 17th March, in which they listed the crime of kidnap of a minor - though at the time no suspects were identified.

Several attempts to garner a police response by Komal's parents failed to start any investigation. Infact, it was only two months later on 17th March 2020, when a local MP Tariq Gill got involved that police initiated a trace on the last call received from Komal by mother Rubina (45 yrs), just before Komal went missing.

During the investigation two suspects were identified Ali Mubashir and Mohammed Azeem who had had been before the home of Komal at around the time she went missing. Local police called Mr Azeem's telephone number and got through and he agreed to meet for questioning, but then absconded and become non-traceable for the duration of the two months with Mr Mubashir.

Then on Good Friday (10th April) a call was received by the mother of Komal, Rubina (44 yrs) who heard strange mutterings on the phone that sounded like her daughter. She reported this to the police who began a trace on the number.

Two weeks later the trace identified a man named Kashif Ghulam Rasool, who was also a local neighbour and a search began for the fugitive. Unfortunately his phone was now switched off and he had also been found to have absconded.

On 12th of May 2020, Rubina Patras filed a subsequent bian (statement) and nominated 5 persons involved in the abduction of her daughter Komal. The subsequent bian stated that on 16th March 2020, close relatives of Rubina Patras, Mubarik Masih and Saleem Masih witnessed a distressed Komal sobbing in a van along with five unknown men.

Through discussions with local neighbours it soon became very clear who the five men were because they had all disappeared from the community at the same time that Komal disappeared. So Rubina was able to inform local police of community suspicions that Muhammed Azeem, Mubashir Ali and Ali Abbas were involved in the kidnapping. One man was still unidentified.

On identification of the culprits, police raided the home of Muhammad Azeem on 24th May and through interrogation they were also able to arrest Mubashar Ali and Ali Abbas, who were in the same house located in Deepalpur, District Okara. The men denied any knowledge of Komal's whereabouts but police kept them in their custody.

Following further searches for Kashif at his home, the paternal uncle of Kashif turned up at Sandha Police Station on 5th June. and brought Komal before the police. He informed police that the teenager was legally married and produced a sham Islamic marriage certificate, a forged birth certificate that stated Komal was 18 years of age (the legal age of consensual marriage). The uncle also brought a certificate of conversion to Islam. He told the officers that Komal would be allowed to speak to her parents, but under no circumstance should she be returned to the family. She was the property of Kashif who was her legal husband and after the meeting Komal should be returned to him.

Following the orders of Kashif's uncle the police invited the parents of Komal, Patras Masih (55 yrs) and Rubina to meet with their daughter. The parents said that Komal was in an obvious distressed state and wept while she communicated in sign language with them. She informed the parents she loved them, that she wanted to return to them and longed for their protection and that she had been regularly raped by a gang of 5 Muslim men. When the parents demanded for their daughter to be returned to them, police denied them permission to take her with them. Member of Provincial Assembly, Tariq Gill who had visited the police with the family demanded for her release and a further police investigation.

On 6th June 2020, Komal was required to attend the Health Department of the Government of the Punjab and underwent a medical examination by Dr. Tauqir Asifa. In her medical report she confirmed the physical and sexual abuse of Komal and identified significant wounding on her right forearm and multiple scars were found on the left foot.

Later the same day, Komal went to the District Education Officer (Special Education) Lahore, to meet with a government officer who understood sign language a statement was thus derived at via Tahir Hussain Gazzi. It is listed that Komal said:

"Suddenly Kashif Ghulam Rasool and her mother Raqiya came and dragged me out of my house by my arm.

"I'm deaf-mute so I could not make any noise to catch attention of family members.

"They took me into a car and drove me to the other side of the River Ravi.

"On 19th March they took me to Jamia Nameea Lahore and was converted to Islam, Kashif made me do it.

"Kashif Ghulam Rasool forced me to marry him.

"After that my husband took me to different places to avoid arrest by the police and he often beat me."

On the same day, Kashif his mother Raqiya applied for pre-arrest bail in the court of Additional Sessions Judge Lahore, Ch. Zulfiqar Ali. Without any hesitation the Muslim judge granted bail to both of them against the surety bonds of 30,000 PKR each. Raqiya had been very friendly to the family of Komal and had been helping in the investigation, much the same as the the caretaker involved in the Soham Murders in the UK. During police investigation she flatly denied being involved in the kidnap, despite being recognized by Komal and her phone number being called during the kidnap of Komal. Oddly she even the parents of Komal when they visited her house on discovering her number was listed in Kashif's mobile. She later that evening beat Komal too because she had made calls that would later lead to her arrest.

Some time later, Qari Muhammad Saeed of Dar-Ul-Aloom Jamia Naeemia, Lahore, gave a statement to the police that on the 19th of March Komal was converted to Islam and legally married. In a statement to Investigation Officer (IO) Ibrar Hussain, he said:

"This conversion took place by writing Qalma Tayba on a paper.

"Komal was brought to me for conversion.

"Komal told me through signs that she can read and write and so I wrote Qalma Tayba on a piece of paper for her.

"Komal followed me in writing Qalma Tayba on another piece of paper and in this way Komal entered into Islam."

Patras Masih has spoken with BACA about the poor policing they suffered, he said:

"In his report he took statements from Muslims in the house that my daughter was repeatedly raped.

"They stated that Komal seemed very happy and content in her marriage and denied other men entered the house.

"This delayed the return of my daughter and led to more beatings and rapes and has slowed down the process of justice."

In the office of Deputy Inspector General of Police Lahore, an application was filed to reinvestigate the matter by MPA Tariq Gill. The application was denied by the office however, BACA's solicitor Sumaira Hussain who is leading this case will be seeking an investigation into police conduct through the courts.

A protest was held in front of Lahore Press Club when the biased and despicable police negligence that led to an extension of the torturous treatment towards Komal. To reduce community anxiety and to bring and end to the protest DSP Javed Sadiq of Central Investigation Agency confirmed to the parents of Komal that from now on a fair investigation will ensue, after calling them to his office on 4th November 2020.

Komal is with her family in a secret place while she is recovering from a very brutal and violent attack.

"This young woman has suffered the most vile and horrid attack.

"There are few woman my age that could survive such an ordeal and yet despite her young years, she has shown a strength and faith in God that is remarkable.

"She prayed and trusted in God - knowing full well he was going to set her free.

"My daughter Hannah is the same age as Komal and also understands British Sign Language, she hopes to communicate with her soon to share prayers and to encourage her.

"When she heard of these horrors she wept - all Christian women should be moved to tears at the base cruelty faced by our sisters in Pakistan.

"This story should be a wake up call - but how many of you will actually actively get involved in eradicating this evil?"

"I am shocked at the failure for police to take action till a Provincial MP got involved - we thank MPA Tariq Gill.

"Komal is my age and it's awful to think that she was trapped in a room and subjected to abuse by five men while other families ignored her plight.

"These false witnesses must be prosecuted their lies only served to extend the torture Komal went through.

"The cleric who permitted the sham marriage and the negligent police are all at fault and must be punished.

"It is a poor indictment of Pakistan that known culprits are able get pre-arrest bail in Pakistan - moreover, the rapists and others involved in this crime can still pay a bribe to keep themselves out of prison.