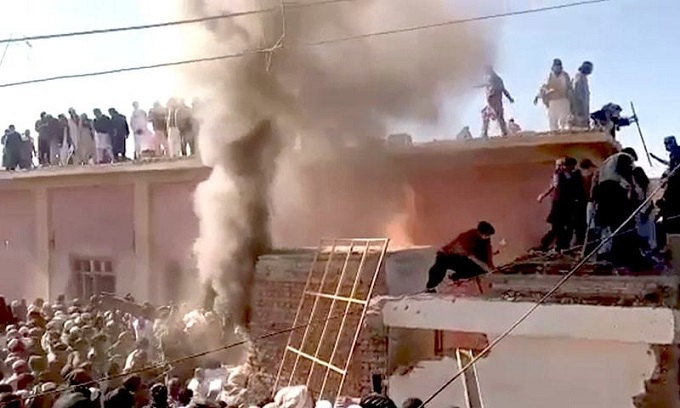 The mob of religious extremists attacked the temple that were provoked by Islamic clerics. The large people gathered, thrown around, vandalized with hammers and set on fire to temple.

Naveed Walter president of Human Rights Focus Pakistan (HRFP) urged authorities for strict actions against unlawful treatments and the attack. He said the mob’s main characters and the elements behind who instigated to mob must bring to justice. He raised that how an easy that a crowd may charge and could stormed at any temple or worship place of any religion. Naveed Walter said that if the local Hindu community becomes interested to extend or renovate their temple then what become wrong by all legal fulfilling, he added.

Naveed Walter said further that the attack is not a new with minorities, several temples and churches has been attacks but not any strategy has been made by authorities. The police role in same incidents has not been changed as it is seen in this incident that they kept silent.

This year during July the Shri Krishana Mandir Islamabad’s construction was stopped by pressure of religious fundamentalists and now even the government got permission on 21st December 2020 for construction the temple after stopping around six months, it looks challenging still to start its re constructions.  Just recently Shri Ram Mandir in Pakistan's province Sindh region was vandalized on 10th October 2020.

In Peshawar the same province’s All Saints Church was attacked on 22nd September 2013 where hundreds of people were victimized. Just during this Christmas, the Pakistani officials thwarted successfully any attack in Peshawar by raid to terrorists who were planning to their target on Christmas day.

Naveed Walter said the abductions, forced conversions and forced marriages of Hindu and Christian girls, the various forms of targeted violence and discriminations, extrajudicial killings and mass murders are in routines practices.

He said promotion of religious tolerance and atmosphere of mutual coexistence are the dire needs. The immediate steps should be taken with practical strategies that will ensure that nobody could disturb to any religious minority, their religious practices and places of worship, Naveed Walter added more.