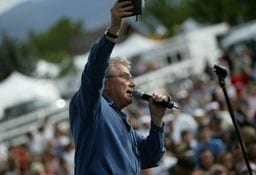 WASHINGTON, USA: (BosNewsLife) Leading Christian rights activist, broadcaster, and author Faith McDonnell, has become director of advocacy at the U.S.-based Katartismos Global (KGI Global) charity. The group says it “exists to equip the Church for mission and ministry” by supporting persecuted Christians and other believers in need.

McDonnell confirmed Monday to BosNewsLife that she left the Institute on Religion and Democracy (IRD), the Christian conservative think tank in Washington D.C. “Yes, after 27 years, I have left IRD and am now very excited to be working with [KGI Global founder and president] Bishop Julian Dobbs and his wife Brenda with their nonprofit ministry.”

She said that that the 2020 worldwide coronavirus pandemic has increased the suffering of persecuted Christians. The advocacy official said several “Islamist regimes and other anti-Christian governments had used the virus as an excuse for further oppression.”

McDonell explained that “Not only have Christians suffered from deprivation of employment, protective equipment, and relief aid. In some cases, such as China, Pakistan, and India, Christians have often been scapegoated for the pandemic.”

As KGI Global’s advocacy director, McDonell will speak to church groups, conferences, and educational and advocacy forums about Christians’ suffering for their faith. “It will be really interesting to see what God is doing in the world this year,” she explained to BosNewsLife. Amid the difficulties, “I am convinced that God is preparing His Church, the Body of Christ around the world, for a great revival,” she added.

KGI Global says her activities are part of its mission to provide Christians in need with practical and faith-based support. The group’s name is based on Apostle Paul’s reference in the Bible to “katartismos,” the Greek word for complete furnishing — perfecting. According to Biblical accounts, he used it when calling believers to use gifts to equip and build up the Church and ministry and become united in the Christian faith’s knowledge.

McDonnell brings to KGI Global decades of national and global experience. As international religious liberty program director of IRD, she raised awareness of persecuted Christians by organizing rallies and protests at the White House, State Department, various embassies, and the United Nations. She also helped create the globally-observed International Day of Prayer for the Persecuted Church in the 1990s.

She says she defends persecuted Christians and other persecuted believers globally, including in North Korea, throughout the Middle East, Nigeria, China, Pakistan, Sudan, and South Sudan. McDonnell was also involved in several books on persecution. Along with former Lord’s Resistance Army (LRA) abductee Grace Akallo Faith, she wrote: “Girl Soldier: A Story of Hope for Northern Uganda’s Children” (2007, Chosen Books). And she penned a chapter in the book “Sorrow & Blood: Christian Mission in Contexts of Suffering, Persecution, and Martyrdom (2012).”

McDonell also contributes to several conservative and Christian publications, including outlets The Stream, World, American Spectator, FrontPage Magazine, Breitbart, PJ Media, Philos Project, Providence Journal, Juicy Ecumenism, and Patheos. And she has been a guest on leading U.S. radio shows “The Eric Metaxas Show” and “Janet Parshall’s In The Marketplace, ” as well as on U.S. networks CBN, Fox News, and the Armstrong Williams television show. She also spoke on global Christian persecution at the U.S. conservative conference gathering CPAC.

While GKI Global will now take much of McDonell’s time, she remains a board member of several other Christian advocacy groups. Those organizations include Jubilee Campaign USA and the Good Shepherd Foundation in Juba, South Sudan. She is also the co-leader of the Anglican Persecuted Church Network (New Wineskins Missionary Network) and the GAFCON Suffering Church Network. And McDonell is a founding member of the Sudan Coalition, the Nigeria Task Force, Act for Sudan, the North Korea Freedom Coalition, and Save The Persecuted Christians Coalition.

That experience impacted her decision to serve Christians after graduating from Eastern Nazarene College and receiving her master’s degree in English at the University of Maryland. McDonell was supported in her efforts by husband Francis John McDonnell until he died in 2014. As a window, McDonell says she adores her daughter Fiona who spent much of her childhood demonstrating at the Sudanese and Chinese Embassies. As a child, her daughter was already meeting bishops and archbishops from around the world. She had dinner with North Korean defectors and other persecuted Christians.

McDonell has a passion for supporting spreading the Gospel and Bible knowledge wherever she can. That’s why she participates in the Anglican Church in North America’s “Every Tribe and Nation” group. “I’ve never seen so much fervent prayer and people hungering for the move of God.”