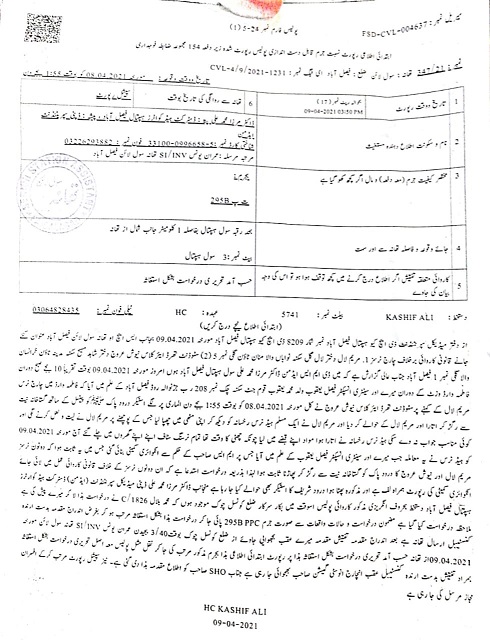 The local contacts of Christians’ True Spirit – CTS informed that the nurses are allegedly accused of blasphemy. They were blamed for disgracing a verse of the Holy Quran which was in the shape of a sticker and posted on the Hospital cabinet in the Fatima ward.

Marriam Lal and Newish Arooj were on duty when Muhammad Waqas (a ward boy) attacked Marriam with the knife and made her injured. After this attempt, there was a mob gathered to kill the Christian nurses. The matter brought up to the Medical Superintendent immediately who made an inquiry about the incident at the hospital level. Mohammad Waqas accused both nurses of committing blasphemy a day earlier on April 8, 2021, he also said that Head nurse Rukhsana was the eye witness of the incident.

Meanwhile, the MS made a call to the local police to provide security to the nurses as well as the hospital because there was an aggressive mob gathered around the DHQ Hospital who could harm the hospital building, other staff nurses, and the patients.

The police reached the spot in an emergency and tried to control the matter. Police also rescued Marriam and Newish Arooj safely and inquired about the matter. Later in the same day afternoon at 3: 30 pm the police have to register a case FIR no.347/21 offense under section 295-B against two nurses in the Civil Line Police Station because of the pressure and the threat of violent attack on the Christian Colonies in Faisalabad by the extremists.

It is worth mentioning that Rukhsana who already has a grudge against the Christian nurses, provoked the Muslim ward boy, claiming that Marriam Lal is a blasphemer as she desecrated the Quran verse by scratching it down with a pencil. In response the ward boy attacked Lal with a knife as she was attending a patient. She received injuries to her hand but survived.

This incident of blasphemy is not very different than that occurred two months earlier at Karachi Hospital against Tabita Gill. Therefore Christians’ True Spirit – CTS is very much concerned and Ms. Katherine Sapna Director made telephone calls to the concerned authorities including Mr. Ijaz Alam Augustine, Provincial Minister for Minorities, and urged to take serious notice of the incident and that there should be a fair investigation of the case to find a real accused and Justice should be done.

I would also like to mention that Faisalabad is the same city, where unpleasant incidents occurred previously after the alleged allegation of blasphemy. We still remember village Korean where the Christian houses set ablaze and Gojra where 147 house given fire and 9 people killed or burn alive in the house during the fire and killing of two brothers Sajid Masih and Rashid Masih in the courtyard Faisalabad when they brought to the court for hearing. The people in Faisalabad are extremists, aggressive and short temper and mostly linked with the Islamic militant groups.

We ask prayers for the two nurses in the custody, also for the safety of their families and the protection of the local Christians.