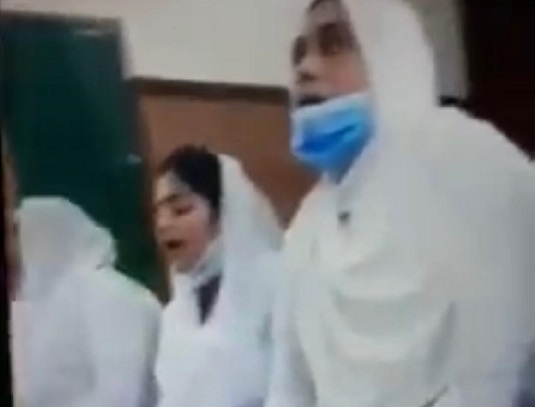 London: On April 26, a group of Muslim nurses of the Punjab Institute of Mental Health (PIMH) came into the chapel and desecrated the Holy Bible and other sacred items. They continued to recite Na'at (Islamic anthems) for hours in the chapel after accusing three Christian nurses, Sakina, Jessica and Tressa of blasphemy against Islam. The video of the Muslim nurses sitting in the building and reciting Na’at went viral on social media.

Sakina Khurram told us that she had shared a post of Arif Ajika, (A YouTube commentator) in her WhatsApp group in which he was sharing his views and criticising the Pakistani government. There were no blasphemous contents of the video, and the other two nurses are accused of liking the same post.

Although there were no blasphemous contents in the video, it nevertheless provoked the anger of one of their Muslim colleagues, who considered it blasphemous and provoked other staff members. Since it was a religious matter, nobody tried to find out the facts, but a mob gathered around and assaulted the nurses. Later on, to show respect and devotion to the holy prophet, hundreds of staff members joined a procession, chanting slogans about sacrificing their lives in the respect and love of the Holy Prophet.

The three accused nurses stated they had no option but to flee the hospital to save their lives. Since then, they have been in hiding.

One of the Christian nurses said they are fearful for their lives and have decided not to go back to their work as in such a heightened intolerant environment, they don’t feel safe, it is dangerous and they can be attacked at any time by anyone.

According to reports, after the involvement of Christian and Muslim religious leaders the dispute was settled and it has been agreed that none of the parties will issue further statements, and also will not file police complaints against each other. But according to latest reports, Muslim staff members are continuing their protests and demanding the termination of the nurses and for the chapel to be converted into a mosque.

In another report the representative of the Punjab Government and Chief minister Punjab Usman Buzdar, Azhar Mashwani, said the dispute had been settled as the conflicting parties have compromised. However, the police and the relevant authorities will continue to closely monitor the situation.

The Christian nurses have gone on long leave and may never return as things are never going to be the same for them, and there will always be threats to their lives.

After the recent nationwide protest by Tehreek-I-Labbaik (TLP) Pakistan to expel the French Ambassador, Christians are scared and even fearful about talking about this matter even on the phone. Although the government has banned the group, it is still powerful and capable of doing anything.

Nasir Saeed, Director of CLAAS-UK has said it is very sad that the misuse of the blasphemy law against religious minorities continue to rise.

He demanded the Prime minister; Imran Khan take notice of this unsettled matter and ensure security to the Christian nurses and other employees of the PIMH.

He said: “People are using this law to settle their personal scores, avenge and punish someone in an easy way by accusing them of committing blasphemy. ”

He further said that it very unfortunate that that attackers are never questioned or charged for taking the law into their own hands, whether it was the matter of Tabeeta, Maryam, Navish or these three nurses.

Mr Saeed added: “The attitude of the law enforcement agencies and the government encourages people to continue to commit such crimes and take the law into their own hands with impunity.

As a result, the number of cases of blasphemy continues to increase, but the government and politicians appear unwilling to take action to end the continued abuse of blasphemy.

“Instead of stopping the ongoing misuse of the blasphemy law, Prime Minister Imran Khan has vowed to impose the blasphemy law across the world. I don’t think Imran Khan will ever be successful in his aim, but it will increase division in the Pakistani society while more fear and hatred against the non-Muslims of Pakistan will grow.”