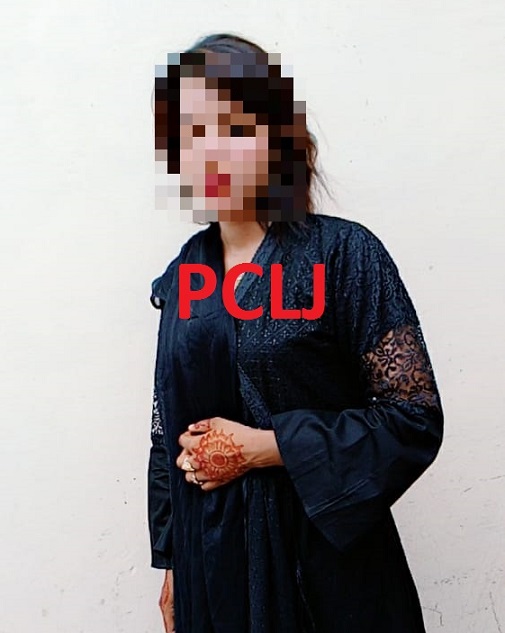 Lahore: (By Napoleon Qayyum) Kiran Bashir is 16 years old and a resident of Lahore and used to work with her mother in homes. There are eight siblings and when Kiran was returning home along with her mother on 8th March 2021 was kidnapped by a small group of people, who tortured Kiran and put her in their car near the graveyard. The mother and the girl tried to resist but didn't succeed. One of the brothers of Kiran named Amir who is 19 years of age told this to Pak Center for Law and Justice (PCLJ).

Further, Amir added that upon knowing the incident they immediately rushed to the local police station, but police didn't respond and police told them to call 15(Emergency Number). The family called about 15 times on 15 but all in vain. Upon their continuous efforts, the F.I.R(First Information Report) was registered the next day. FIR number is 768/21 and offense number is 365b.

The family of Kiran Bashir gave the names of the following people who kidnapped the girl.

2. Bilal (younger brother of the accused).

3.Kabir (Main accused) he is wearing a brown jacket in the picture

It is worth mentioning that the mother of Kiran told PCLJ that the main accuse is Kabir and in F.I.R he is named Kabir but on the marriage certificate, Kabir is named Sahil. Further investigation revealed that Kabir had forcefully married Kiran Bashir and the same was the purpose of kidnapping Kiran Bashir.

Amir Bashir told PCLJ, that when police investigated Ramzana Bibi she told police that they had previously kidnapped two girls and sold them and they are planning to do the same with Kiran Bashir (Victim) but police took the bribe and released the main accuse.

Amir further added that there is a boy named Gogi who daily comes to their house and pressurizes them and shows them his gun and says that the girl didn't want to talk to you.

There is also another man named Waheed from Mughal Colony. Who stated to the family that if you didn't stop the investigation then we will kidnap your boy also.

Now the condition of the family is very tire. They are searching for help but the attitude of the police is very bad and the family desperately needs help.

Parents name are given below:

Below is the list of siblings of Kiran Bashir:

Police did their own factfinding and the Incharge Investigation Officer of this case told lawyers of PCLJ that I investigated the marriage form and went to Kacheri, where the marriage certificate was made, and he found out that the Islamic Marriage Certificate was fake. And the person who did the marriage ceremony was also a wanted person. And many cases were registered against him.

The Incharge Investigation Officer is not arresting the culprit and he doesn't have any intention of arresting him.