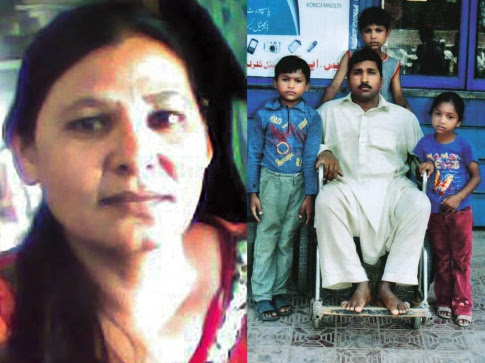 LAHORE: A Christian couple, Shagufta Kausar and Shafqat Emmanuel, are found not guilty after 7 years of suffering in jail. The couple have been sentenced to death in April 2014 but imprisoned since 2013 for insulting the Prophet of Islam by sending blasphemous SMS via mobile phone sim. On the basis of insufficient evidence Lahore High Court ruled that there is insufficient evidence to support the blasphemy accusations levelled against them.

The appeal hearings of the couple have been postponed many times. In the month of April the European Parliament passed a resolution to review trade relations with Pakistan after the case. It is believed that this pressure has to some extent motivated the court to grant speedy justice to them. It can be stated so because there are many other blasphemy related appeal cases pending in Lahore High Court such as of Sajjad Masih Gill, he was sentenced to life imprisonment and a fine of 200 thousand rupees by a court of first instance in Gojra. He was sentenced in 2013 and his appeal is pending in Lahore High Court. He is languishing in jail and waiting for his release. It is expected that he will be acquitted in appeal due to insufficient incriminating material available on record against him.

A United States citizen, Shakeel Anjum, whose brother, Nadeem Samson, is facing trial in Lahore under blasphemy charges, is appealing to the international community to raise voice for his brother. On 24 November, 2017, a Muslim man Abdul Haq complained to police that Samson had created a fake Facebook account where he allegedly posted blasphemous material. There was a home lease agreement related dispute between Samson and Haq in revenge Haq abused blasphemy law against him.

Sardar Mushtaq Gill, a human Rights lawyer, said that it is good news that the Christian couple is acquitted but a major part of the performance of Pakistan is still expected to be done regarding the reformation of blasphemy laws in Pakistan. Pakistan’s blasphemy laws are incompatible with international human rights standards not only because they impose undue restrictions on freedom of expression, freedom of religion, and other human rights, but also because they are discriminatory in their effect too. Moreover, they lack the necessary safeguards against abuse, providing no clear definition of what constitutes blasphemy of Islam, weak evidentiary standards for convictions in lower courts, and there is no mens rea (criminal intention) required to prove the offence. No specific number of witnesses is required. No explicit definition of blasphemy is required.

In the eyes of law: To constitute offence under section 295-C Pakistan Penal Code, number of witnesses were not required and it was not necessary that such abusive language against Prophet of Islam should be made loudly in public or in meeting or some specific place, but statement of single witness that somebody had made utterance for the contempt of Prophet of Islam even inside the house was sufficient to award death penalty to such contemnor [2005 YLR 985]. If the accused is Muslim then law says-Material produced by Petitioner before High Court did not divulge the commission of an offence under the law of blasphemy by the Governor of Punjab, who was a Muslim by faith, so the question of registration of a criminal case against him did not arise. [2011PCr.LJ973].This makes it possible for the laws to be exploited to persecute minorities or exact revenge in personal disputes.

It is widely believed that the draconian Blasphemy Law is used for the miscarriage of justice; it is exploited ruthlessly by Islamic fanatics to settle scores with rivals and by religio-political parties to gain political leverage over administrative apparatuses. The Blasphemy Laws in their present form have become a source of victimization and persecution of minorities in the country. Minorities suffer all manner of humiliation through false accusations made under these laws. In the present climate of hate, intolerance and violence in Pakistan, the Blasphemy Laws have become a major tool in the hands of Islamists to settle personal scores against members of religious minorities, particularly Christians.

We know death is a risk that comes with the role of the Christian Faith campaigner but we will not shirk from criticizing the Islamic blasphemy laws and calling injustice what it is. We have launched an international campaign to raise awareness about the misused and targeted use of Islamic blasphemy laws against Christians in Pakistan. The goal is to have blasphemy laws repeal in the home country, Pakistan, because they have caused too much violence and discrimination against religious minorities and particularly against Christians; and they have created a fear of insecurity and made them unsafe in Pakistan.