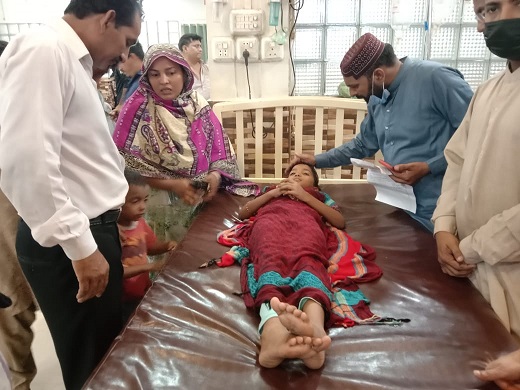 After the girl's condition worsened, the locals contacted the local police station to intervene.

On this occasion, the perpetrator of this heinous crime was immediately arrested. Innocent girl was admitted to Seoul Hospital, Hyderabad for medical treatment.

However, according to initial reports, the girl's senses were not fully restored till her abbey.

According to the management of Seoul Hospital, her mental balance was not maintained. Take the necessary tests After receiving the report, legal action will be provided to the police and all necessary steps have been taken to provide the best medical treatment.

On this occasion, PPP Minority Wing District Hyderabad Vice President Maqbool Sadiq Khokhar said that any medical treatment should be provided. Such negligence will not be tolerated at all and full cooperation will be extended to the affected family and all resources will be mobilized for justice.