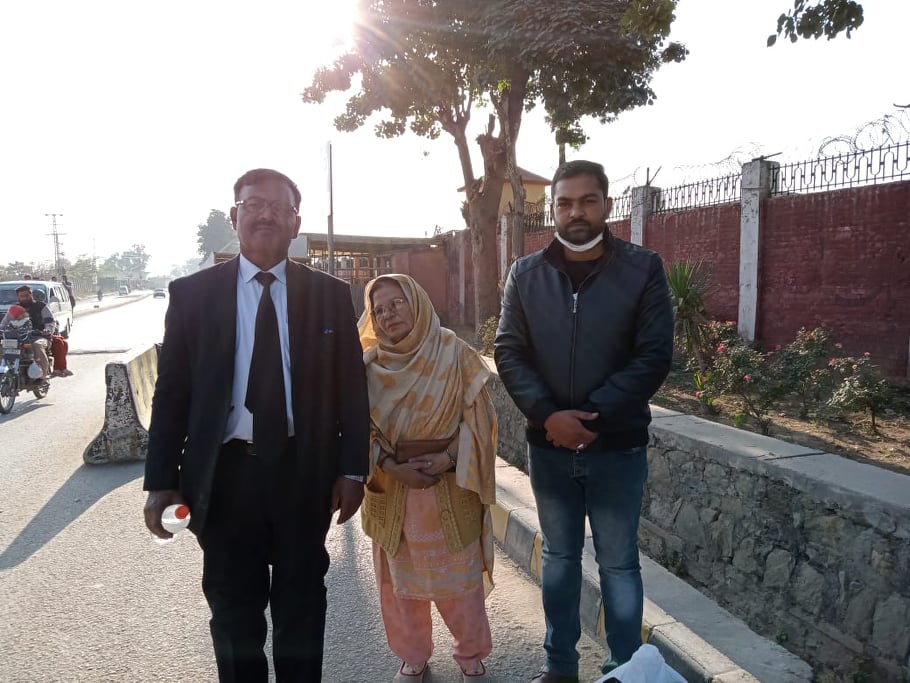 London: (By Hannah Chowdhry) We wrote about the impending death sentence for Zafar Bhatti.  This was being sought in Rawalpindi Sessions Court, by extremists intent on making the elderly Christian convict the first ever man lynched under the notorious blasphemy laws of Pakistan.  Read more (here).

We have been working with our solicitor in a last gasp attempt to save him from a hanging.  Zafar in October gave up with his former legal counsel and sought our assistance .  Today BACA may have found a solution to the ongoing saga regarding the false blasphemy allegation that has stolen almost ten years of his life.

On 16th December our arguments for the acquittal of Zafar Bhatti were heard by Rawlapindi Sessions Court Judge,, Sahibzada Naqeeb Shehzad, in the presence of complainant counsel Muhammad Yasir.

1. No forensic report of alleged blasphemous text messages has been exhibited in  court.

[The Intelligence Bureau has exhibited a record of messages sent to the court without any content of any of the alleged messages. A record message transmissions is not enough to convict anyone for a crime in any criminal context even blasphemy?  Neither the phone of accused nor of the complainant have ever been sent for forensic report.]

2. In the original crime report the investigating officer has recorded that when he recovered the alleged phone from Zafar Bhatti he did not find any blasphemous message on it. According to the same report messages had already been deleted.

[Naseeb Anjum argued if such messages had originated and were transmitted from the phone of Zafar Bhatti, the forensic department could have requested retrieval of  those messages. He postulated that this never happened suggesting no blasphemous message has ever been written, transmitted or deleted by Zafar Bhatti. He affirmed that  Zafar Bhatti has been involved in the case falsely.]

3. Zafar Bhatti in his statement under section 142 has recorded that Christianity does not preach and teach to insult the prophets of the other nations. He has always refuted the accusations made against him.

4. The only message content exhibited in court is a plain image of some blasphemous words devoid of any date or time.

4. No eyewitness has  been produced at court from the outset of this case.

[The only witnesses for the alleged blasphemous messages were the employees of Imam Muhammad Ibrar Ahmad Khan, they have both declared they saw it and that it was too blasphemous for them to read the whole message so they turned away.  We suspect that the reason they cannot remember the content of blasphemous messages was because they were never really seen and that turning away was simply a way to hide this fact from investigators]

“Your arguments are weighty and should be answered by the complainant counsel.”

Muhammad Yasir, the complainant counsel jotted down all the points raised by Naseeb Anjum and made a request to the court, that they give another date for hearing.  He mooted that he would answer these points at the next hearing on 24th December.

“Zafar has spent almost 10 years of his life in prison.

“He now holds the record for the longest serving blasphemy convict in Pakistan.

“Even then the men who fabricated an account of blasphemy against him are adamant they want him dead.

“They have challenged for his death by hanging while we pursue an acquittal.

“The ease in which blasphemy allegations lead to convictions is alarming.

“The severity of the punishment is despicable.

“By maintaining these draconian laws Pakistan continues to illustrate how volatile and fundamental their society remains.