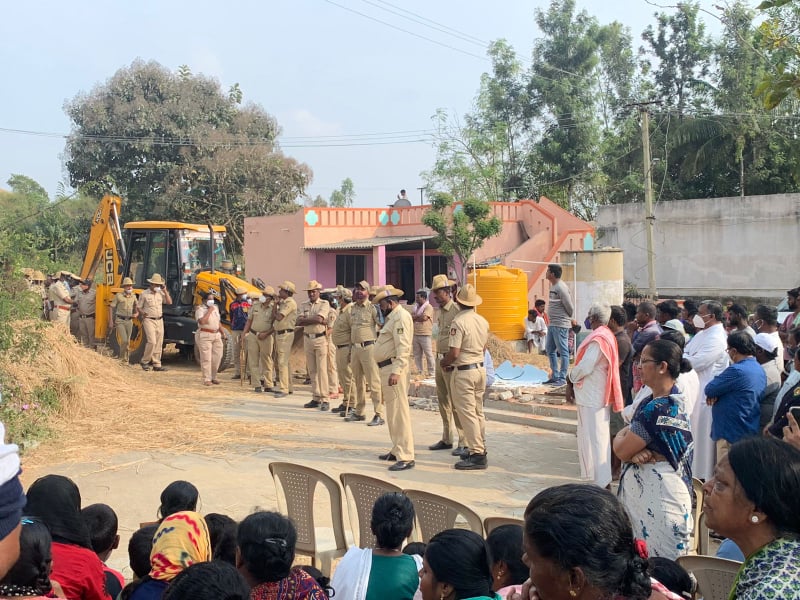 London: 400 police officers were involved in keeping scared Christians away from demolition works.

A 20ft statue of Jesus Christ that was erected in 2004 was pulled down unceremoniously and then smashed to pieces by the Kolam Administration of District Karnataka.

Archbishop of Bangalore, Peter Machado has condemned the act which he says occurred without the local authority going through due process.

On 15th February at approximately 9am in the morning, local people from Gokunte Village witnessed an unexpected demolition of a well known statue of Jesus.

District administration official along with a demolition team, accompanied by nearly 400 policemen arrived at the small village (2km from Andhra Pradesh border) and began to pull down the statue.

The village, which has a population of around 600,  is mainly comprised of Christians who observe the Roman-Catholic faith.  It is believed only 4 families adhere to the Hindu faith in the locality.

Archbishop Machado in a press release has condemned the action.  He alleges the district administration had no right to demolish the statue, because the 2 acre land on which it was erected belonged to a local church.  He has also stated that paperwork confirming ownership is with Saint Francis Xavier’s Church est. 1928, Gokunte Village.

The Catholic Church in India is incensed that the demolition took place despite a court stay order in place, from a trial court, denying authority for the action taken. The next hearing for the case was too be 16th February and it seems intentional that the District authorities smashed the statue before the court could give its verdict.

In 2019-20 some fanatic Hindu groups from nearby Taluk of Bangarupet, Karnataka state falsely filed a Public Interest Litigation (PIL) in Karnataka High Court in Bangalore stating that St. Francis Xavier’s Church, Gokunte village had illegally occupied 300 acres of government reserved forest and built  the Jesus Christ Statue on a public  hill. A court case has been ongoing since then with stay orders.

But the local Tehsildar (land officer) has stated that there is a standing Court order given in March 2021 for demolition of the Jesus Statute due to construction law. She also claims the area of land that the statue is erected on, is reserved forest land for animal pasture.  Ignoring the stay orders she demolished the 20ft statue, an Arch built to signal the  way for pilgrims and 14 crosses built in the village within Gokunte village leading the way.

Bishop Machado, wrote in his press release on 17th February 2022:

“local authorities considered them as not proper or incomplete”

“Even if assuming that the structures were not fully authorised, the government could have had the magnanimity to allow us time to regularise them”

“Isn’t it true that the Karnataka government has recently introduced a bill to protect unauthorised religious structures built on government lands not be demolished in Karnataka?

“Is this privilege applicable only to certain religious groups and not for minority communities?

“Are there no other communities of other religions who have illegal structures on public or government properties?

“Why this discriminatory attitude towards the Christian community only?”

14 other Stations of Cross depictions were also demolished in the same Gokunte village amounting to a huge financial cost and huge loss in morale for the local Christian community.

Local support from Hindus was evident and they have been equally shocked by the decision by the District Administration.

“This demolition and the recent demolition of a church in Hyderabad is indicative of increasing Hindutva in India.

“life for Christians is increasingly difficult and actions like this serve only to increase anxiety.

“This action seems to be unlawful and very deliberate in its prejudice.

“Local people are astounded but the council seems to be following the whim of nationalists.

“If authoritative powers keep on taking action like this it will slowly poison the friendly Hindu population and result in widespread hatred.

“To me it seems like early signs of a genocide.”

Dr Vuchula shared this video being shared by extremist Hindu groups in India.  The video praises the bigoted act of local officials by recording a Hindu nationalist song over images and footage of the statues destruction:

“This act of District council vandalism is a despicable display of Hindutva (Hindu Nationalism).

“For all intents and purposes the local Catholic Church have done all they can to follow procedure and challenge things in the court and local government channels.

“To destroy long-standing religious artefacts without notice and legal authority is disgraceful.

“To involve 400 police officers in a blatantly prejudicial act of vandalism is just woeful.

“Since the Bharatiya Janata Party with their known Hindu Nationalistic ideology have been in power, the equality and rights situation for Christians has reached a nadir.”

We reported the demolition without warning  of a church in Hyderabad, India on 4th February 2022.