Pakistan: Sarghoda court- assessment rules that deceased Christians were worth 1/2 and 1/8th of the value of a deceased Muslim 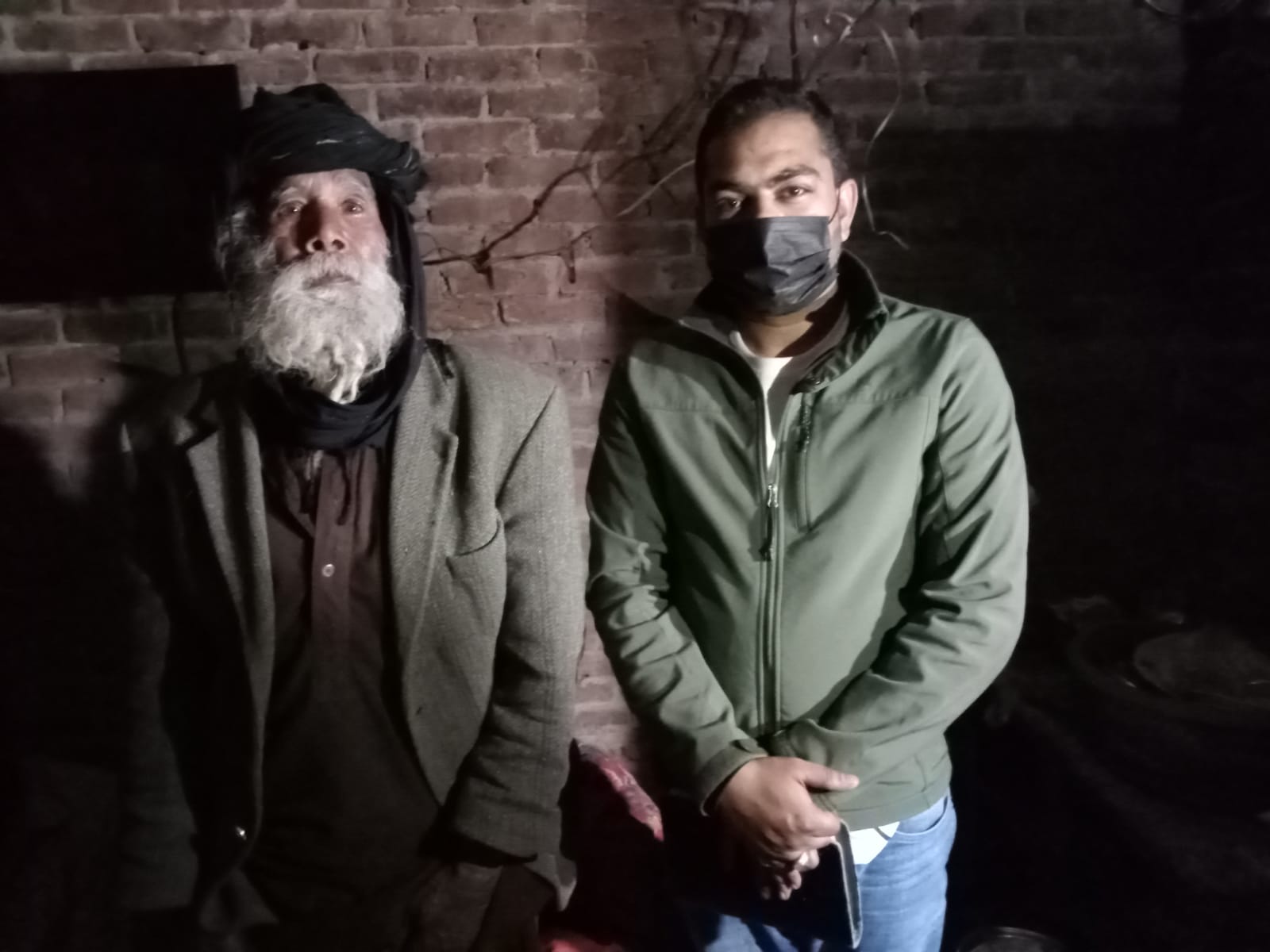 London: (By Hannah Chowdhry) Praying with the family of Nadeem Masih (RIP) killed saving the life of another sewage worker SHARE

We revisited the families of the two sewage workers who were killed in Sargodha when forced to enter a known poisonous sewage tunnel to save the life of Michael Masih another Christian.

Their Muslim bosses sent them in after initially shouting expletives at Michael Masih and berating him when he refused to enter without PPE, due to high toxicity levels.

Heroes Nadeem and Faisal saved Michael but died in the process, leaving their widows with young families to fend for themselves.

On Monday, 14th February 2022, BACA team visited the families of deceased Nadeem Masih and Faisal Masih (RIP). Both men were sanitary workers for Metropolitan Corporation Sargodha who died due to poisonous gases in the sewer they were forced to enter without safety equipment.

In October 2021, both men entered into a manhole to save the life of co-worker Michael George Masih who had bene forced into a sewer without PPE.   The deep sewer line on the main road in Sargodha was already known to be full of noxious gases and unsafe for entry but busses refused Michael’s remonstrations and verbally abused him till he entered the main sewer. Within minutes Michael fell unconscious and Nadeem and Faisal were told to enter the sewer without PPE by the same Managers who sent Michael into the sewer.

The two brave Christian men lost their lives as they were engulfed by a flood of sewage while in the process of saving the life of Michael, the only survivor.

After an initial investigation police registered a First Information Report – FIR No. 612/21.  This was registered against supervisors Muhammad Farooq, Muhammad Rashid and Muhammad Amjad on the charges under section 321 and 322 of the Pakistan Penal Code:

“Whoever, without any intention, cause death of, or cause harm to, any person, does any unlawful

act which becomes a cause for the death of another person, is said to commit qatl-bis-sabab.

“A unlawfully digs a pit in the thoroughfare, but without any intention to cause death of, or harm

to, any person, B while passing from there falls in it and is killed. A has committed qatl-bis-sabab.

Widow of hero Faisal Masih with her youngest child.

Anum Bibi (21 yrs) who was the wife of Faisal Masih has remarried with the help of her parents and now lives with her new husband in the same area. She said:

“Life without Faisal was too hard for me and my sons.

“I did not know how to survive without him.

“I did not have money to buy milk for my crying sons.

“God has given me a new husband to care for myself and my children.

“I miss Faisal and I thank God for the life he gave me with him.

“He was a good Christian and knowing he is in heaven, before God given me and his children great comfort.”

Faisal’s two sons, Izek Faisal (14 mths) and Harris Faisal(2.5 yrs) are very healthy.  Daniel Masih, the father of Faisal Masih lives with a disabled brother of Faisal Masih.  He once shared a bubbling and lively home with Faisal, his wife and children too.  For him the loss has been very draining.  BACA officers gave £100 to Daniel Masih and £100 to  Anum Bibi to help them during this time as they deal with the loss of someone special.

Daniel Masih lost a bubbly family life the day his son died in a sewage pipe.

“I lost a beautiful boy, a wonderful home environment and the only people who wanted to help me in my elderly years.

“I have to care for  on my own and it is tough but he needs my help and God is our provider.”

Mariyam Bibi (36 yrs) the wife of Nadeem Masih is a diabetic and cardiac patient.  Despite poor health she has taken on the sewage work that her husband once did.  She survives on the very meagre pay she receives from the Metropolitan Department of Sargodha.  Her pay out in the compromise deal was a 1/4 fraction of  the amount given to the wife of Faisal Masih because he was not a direct employee but was on contract.

Mariyam Bibi has had her life turned upside down since she lost her husband. She is in a position of financial ruin and has had to place her 14 year old son into work.

Mariyam herself is now a contract employee which means her efforts do not avail the facilities a regular Government employee receives. Mariyam is not entitled to medical leave or any medical benefits. Mariyam explained that the work is hard and health sapping, she is often sick and her eldest son Suleman (14 yrs) then has to go to work in her place. Suleman  has had to quit school to shoulder the burden of her health and inability to work.  Mariyam, said:

“This is the reality for many families that have to survive financial crisis through the employment of children.

“It’s not a choice this become a soul-sapping necessity.

“It’s not an easy life without a husband but knowing my elder son’s life is being wasted in such a menial job breaks my heart.

Mariyam has six children and all the other children go to a government school in the local area.

“Nadeem was conscious about the education of his children and wanted them all to have higher education.

“He desired that his children may earn respect for him someday.

“I am afraid I cannot fight with poverty without him”

“When my father was alive, he often told me what dreams he had for me.

“He explained the importance of education.

“But I have have had to drop school to ensure that my brothers and sisters complete their education.

“My father is gone now and I understand my duty to my family.”

BACA gave Mariyam a gift of £200 Pounds to help with the economic strain she is under. Mariyam thanked BACA and is willing to send Suleman back to school if we can raise the £70 a month wages he is earning.  We would love to be able to do that and call on our supporters to meet this desperate need for this family.  If you would like to help support the family with any donations towards the cost of £70 per month for the next 4 years.

14 year old Suleman can be seen praying with his family. We hope to get him back to school with your help.

BACA is concerned about the compensation that has been paid to the families of the two deceased Christians.  Under Diyat laws if a compensation agreement is agreed for a person who has been killed through murder or manslaughter, the payment figures are set by a judge and not the families or any other prescribed means,  The Quran refers to the a payment of 100 camels which would have been the equivalent of 4.25 kg of gold.  But in Pakistan, figures never reach this level.

Pakistan purports that the life of minorities are the same value as those of the majority Muslims but judges seem not to understand what the politicians are demanding.   Judges seem to apply Sharia law above the state laws, referring to the Hadith for guidance.

Umar ibn Abd al-Aziz, an early caliph admired for his piety and scholarship, ruled on Diya:

“Yahya related to me from Malik that he heard that Umar ibn Abd al-Aziz gave a decision that when a Jew or Christian was killed, his blood-money was half the blood-money [diya] of a free Muslim.”

You will also notice how often Christian murder cases are delayed and postponed.  This is intentional because Judges are trained to prioritise Sharia Law over state law and believe it is a cardinal sin to kill a Muslim for killing a Christian.  They attempt to allow worthless Christians a chance to settle out of court so that Muslims do not need to face a sentence. They judges again take their lead from the Hadith:

“Do you have anything Divine literature besides what is in the Qur’an?” Or, as Uyaina once said, “Apart from what the people have?” ‘Ali said, “By Him Who made the grain split (germinate) and created the soul, we have nothing except what is in the Quran and the ability (gift) of understanding Allah’s Book which He may endow a man, with and what is written in this sheet of paper.” I asked, “What is on this paper?” He replied, “The legal regulations of blood-money [diya] and the (ransom for) releasing of the captives, and the judgment that no Muslim should be killed in Qisas (equality in punishment) for killing a Kafir (disbeliever).”

Both the families have not received the 4.3m Pak-Rupees enshrined in Pakistani Law as the correct Diya payment, set by the Federal Governments Finance Department in July last year (click here).  One family received close to half what should have been given as compensation.  The other an 1/8th, after a Judge decided that the compensation amount should somehow be lower, because death of a Christian contract worker does not return the same level as a fully employed worker.

We are surprised at the result and concerned about the level of legal protection provided to both families, who chose at the time not to take BACA’s legal provision and accepted free legal cover from a solicitor named Tanveer Naveed.  We have written to the Pakistan High Commission and have asked back for a response from the Government of Pakistan on the difference in the amounts given to both families and why both families have fallen short of stipulated levels of compensation.

“It’s a shame the family did not accept our offer of legal aid as we would have seen this case through to a conviction, for the three Muslim manslaughter culprits.

“There was solid evidence of a crime this case was easily winnable.

“We have even been informed the same managerial bullies are back to their old tricks – which makes the acceptance of a compromise even more distasteful.

“That people that intentionally or inadvertently caused the death of another can escape justice by paying a fine is a poor indictment of the Pakistani legal system.

“That non-Muslims cannot expect the same level of justice as the Muslim majority, is evidence of the prejudice that pervades throughout Pak-society.

“It is this repeating pattern of behaviour that has created a hostile environment for Pak-Christians who are amongst the top 10 persecuted Christian societies across the globe.