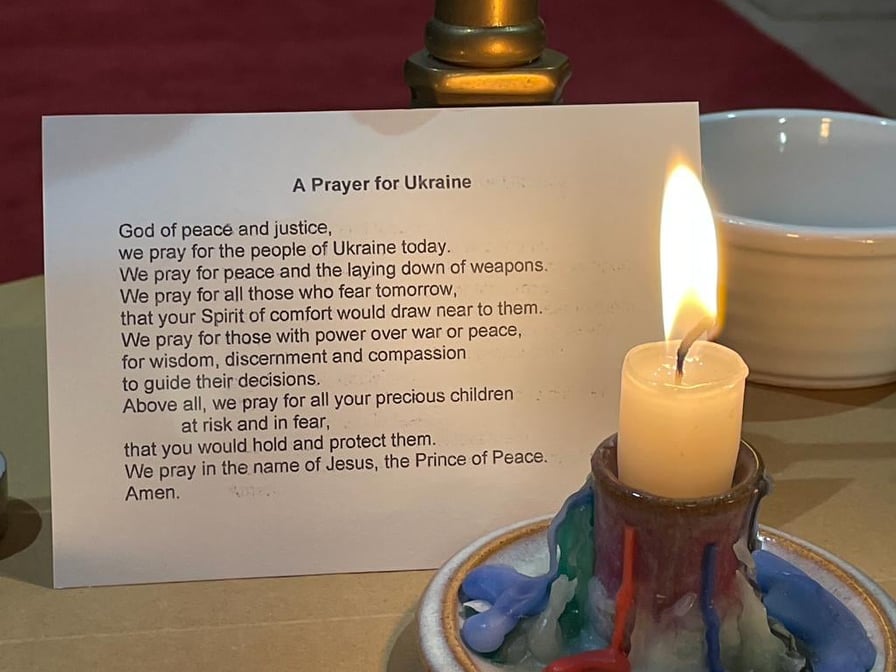 London: (By Hannah Chowdhry) 27th February 2022 will forever be remembered as the day churches across the globe prayed for an end to conflict between Russia and Ukraine.

The war in Ukraine has displaced over 500,000 people mainly women and children who have sought asylum in neighbouring countries, of which Poland has the largest percenta

Though President of Putin of Russia claimed that he would not be attacking civilian sites, increasing evidence illustrates that schools, homes and other non-military sites have been hit by land and air strikes.

Across the UK and churches across the globe fervent prayers were being made by Christians desperately seeking an end to the war in Ukraine.

In Chigwell, Essex a local vicar invited concerned people to join two special services dedicated to praying for Ukraine on Sunday.  In a community WhatsApp the Vicar shared this beautiful prayer:

Ilford High Road Baptist Church in London, remembered the Ukrainian people and prayed for an end to war.

In Pakistan, Pastor Naseer Masih from New Convent Church, Youhanabad, in Lahore gave an address to his church. In his prayer he calls for an end to war explaining how saddened our God is when he see’s mankind killing each other – this is not what man was created for.  He describes how  God came to this earth to bring new life and salvation and he called for God’s blessing on people from both sides and an understanding of God’s scriptures.

In his address and prayer Pastor Teerth, reads out a message from some Evangelists who have chosen to stay in Ukraine despite the attack.  He relayed their message on Sunday:

“This is quite possibly our last means of correspondence for some time.

“War is imminent and the consequences dreadful.

A state of Emergency has been declared and this will be followed by martial law.

“Young Ukrainian men from 16 years of age are being called up to serve n the military and Ukrainians are being given the right to carry arms.

“A major cyber attack is happening just now as we write, which has affected Ukrainian Banks as well as government websites.

“Ukrainian citizens are being asked to leave Russia and our local currency is in free fall.

“As an elder in the assembly my responsibility is to shepherd at all times.

“It would be a terrible testimony to get up and leave the Lutsk believers.

“We have been preparing for this day.

“Rhoda and I have bought in generators, fuel, food etc. as we would like to change the Gospel Hall into a place of shelter to accommodate and feed the assembly believers, who will face many a hardship.

“God is about to give us a great opportunity to show our Christian faith, particularly, and reach out into our community with the Gospel.

“Rhoda and I may have have to move out of our apartment as we are close to the Lutsk military airfield,

“On the 14th floor of our apartment block we have the central offices of the SBO, the Ukrainian secret police.

“As we close military jets can be heard overhead and we covet your prayers!

“We are not any braver than you – but confident  we are where God would expect us to be.

They ended their message with a reference to a bible verse which was Daniel 4:17.  We have copied the verse here for you to read:

“’The decision is announced by messengers, the holy ones declare the verdict, so that the living may know that the Most High is sovereign over all kingdoms on earth and gives them to anyone he wishes and sets over them the lowliest of people.’

War broke out between the two nations on 23rd February over a Russian desire for Ukraine not to Join the North Atlantic Treaty Organisation (NATO), a group of nations that have agreed to support each other in times of war.  Read more (here)

Ukraine was working towards NATO membership which NATO has said was open to any country to join after first fulfilling their requirements.

The Russia Government alleges that the US originally made a deal with them during Mikhael Gorbachov’s presidency in the 1980’s,  that NATO would not allow membership to countries that border Russia, a claim with US Officials flatly deny.  Read more (here).

For weeks Russia had amassed around 150,000 to 200,000 troops along the Ukraine border.  While nations in the west threatened President Putin of severe international sanctions if he began a war.

On 23rd February, Russia sent their military into Ukraine using the pretext that the operation was needed to protect Russian-supporting civilians in eastern Ukraine who desired separation. This was  a claim the US had predicted President Putin would falsely make to justify an invasion.

President of Ukraine Volodymyr Zelensky, today announced that 16 children have been killed so far. It follows statistics from the Ukrainian government released on Sunday, reporting the number of civilians dead at 352. Thousands more have been injured mainly from heavy artillery. multi-launch missiles and air strikes.

A report about a family shot dead by Russian soldiers while travelling through the nations capital Kiyiv has been the most shocking revelation of this war so far.  Polina a Year 4 student believed to be 9 or 10 years of age and her parents died immediately.  Her two siblings are being treated in hospital.

Since the start of the Russian aggression global leaders have condemned the attack and Japan, European Nations, Canada, Australia the US and UK have already put in severe sanctions, which have negatively affected the Russian economy.

Incensed people across the globe took to the streets to protest against the Russian oppression.  Protests were held in most western capital cities, as people called for their respective governments not to ignore the plight of Ukrainians.

However Pakistan’s Prime Minister Imran Khan joined President Putin in a discussion over Islamophobia, Afghanistan and a £multi-million gas-pipeline Russia wants to invest in, between Karachi and Kasur (read more here).

The Evening Standard reports  that The Russian Central Bank has raised interest rates from 9.5% to 20% as the rouble sank to an all-time low.

UEFA and FIFA have suspended  all Russian teams from their competition until further notice and have dropped a large $40 million sponsorship deal with a Russian oil firm.

BP who are the largest foreign investor in Russia, on Sunday confirmed they will  abandon their stake in state oil company Rosneft, writing off up to $25 billion.

In an unprecedented move, the European Union (EU) have also declared support by way of a £500m supply of armaments including anti-tank equipment and fighter jets.  This is the first time in the EU’s history that they will find military equipment for a nation under attack.  Read more (here)

Yesterday officials from Russia and Ukraine just inside the border of Belarus, but discussions fell way short of a ceasefire.  Ukrainian President Volodymyr Zelensky has also called for the immediate adoption of Ukraine in the European Union. Learn more (here)

“I am praying for a swift return to peace.

“The tragic accounts that are filtering through to people via social media illustrates the futility of war.

“Our thoughts and prayers are with all those who are suffering, the 500,000 displaced people, families who have lost loved ones and those fighting a war that should never have been.

“May God give them strength and our leaders wisdom.”