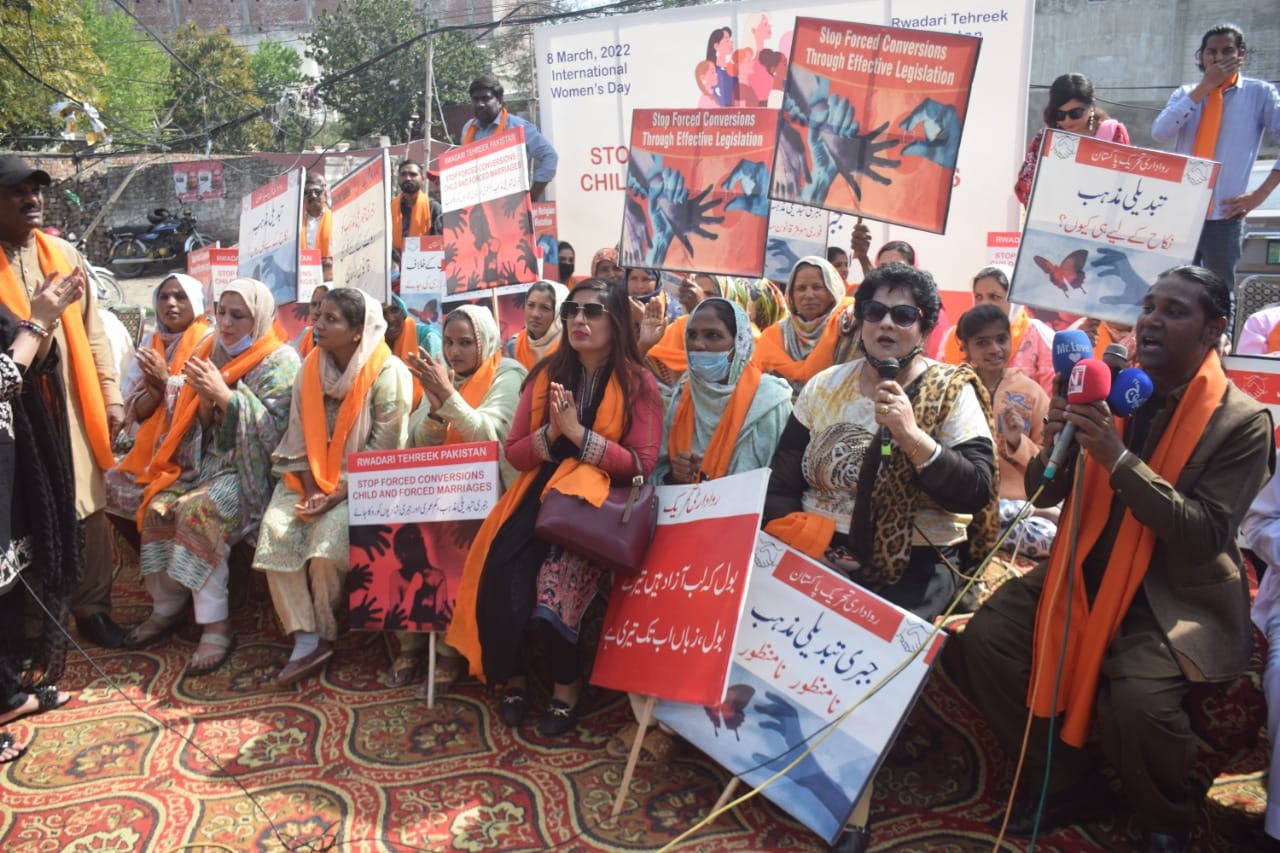 Lahore: Scores of members of Rwadari Tehreek Pakistan belonging to different faiths and religions gathered in front of Lahore Press Club on 8th March International Women's Day for a Protest Camp to urge the federal and provincial governments and legislative assemblies to enact effective laws along with a strong implementation mechanism to stop forced religious conversions which is a threat the fundamental freedoms of the girls belonging to minority communities including their religious freedom and freedom to make decisions of their own choice.

The activists of Rwadari Tehreek Pakistan expressed their concerns about the consistent incidents of abduction, forced conversion and forced marriages of the girls belonging to minority communities and chanted slogans on the negligence of the state machinery for their failure to protect minorities, especially the parliament, human rights and minorities affairs ministries, National Commission on Minorities and the judicial system which fails to provide timely justice in most of the cases.

Mr. Samson Salamat, Chairman Rwadari Tehreek while addressing the Protest Camp said that “forcing someone to change religion or enter into a marriage against free will is a grave violation of human rights. Unfortunately hundreds of girls belonging to religious minorities are being abducted, forcibly converted and then married off to their abductors every year. This is indeed an extremely serious problem being ignored by the state machinery, parliament, political parties and other stakeholders which has increased and nurtured the sense of insecurity among minorities”.

Member CEC in her statement said that “This is a sad and unfortunate reality that the legislation for the protection of minorities is hardly being initiated and if someone dares to table any bill, it is being rejected- the moves to pass legislation to discourage and stop forced conversion and unsolicited marriages has already been struck down in Sindh Assembly and National Assembly in the past, and sadly the legislation has yet to be initiated in Punjab, KP and Baluchistan Provinces in this context".

Secretariat Incharge Rwadari Tehreek Asmarah Daud said that “Today’s Protest Camp on International Women’s Day is yet another effort to urge the government, parliamentary parties and other state-holders to demand for immediate and effective legislation before it get worst, therefore our demands should be seriously addressed”.