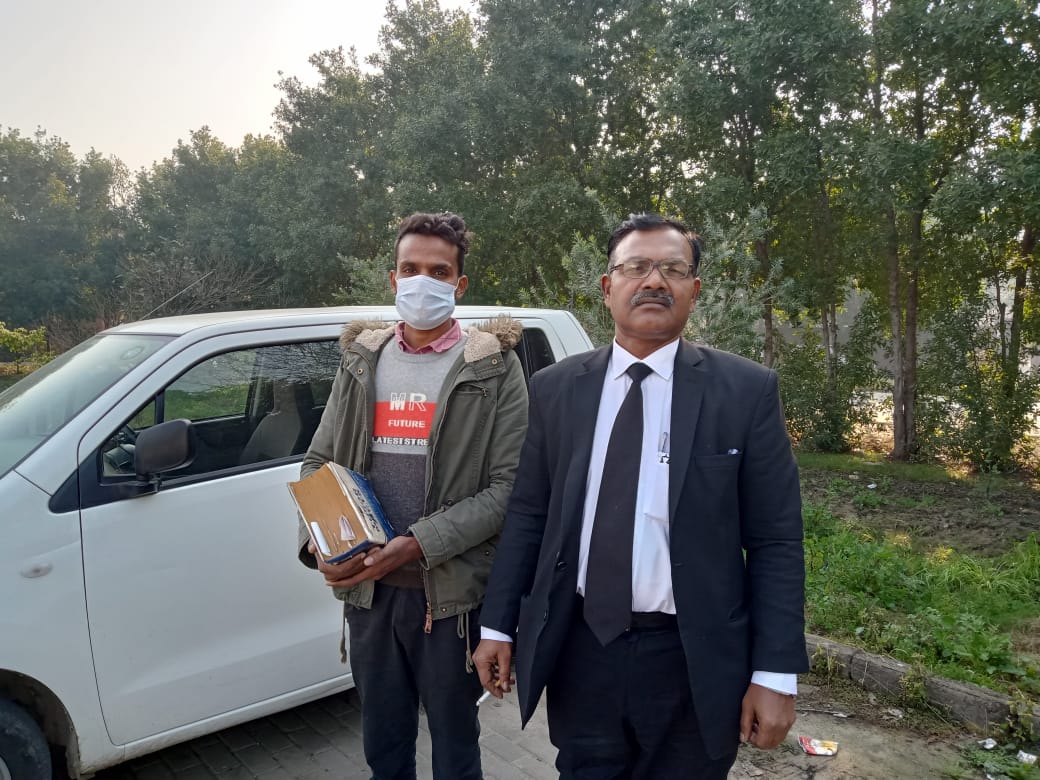 London: (By Hanna Chowdhry) After three years in prison and many failed appeals while under the care of other Christian charities, Nabeel chose to seek help from British Asian Christian Association (click here).

Since then BACA have been fighting for his acquittal and were shocked when the courts refused his absence from proceedings despite the risk to his life (click here)  In tandem we are seeking help from western nations with the hope of providing asylum for Nabeel in a country that is safe.

In our last report we explained that the judge was being extremely lenient to the counsel for the accuser and permitted a postponement based on papers having been left at his office.

There has also been a third judge change which we believe has arisen because of the religious sensitivity of the previous judge. We bring you up to date since our last report (click here for last report)

After an arduous journey through heavy fog and cold weather the hearing could not proceed as the complainant counsel refused to furnish his argument.  This was because he was awaiting a decision for a writ (No.4492/20) he had submitted via Sessions Court Lahore, against the Federal Investigation Agency in regards to a decision they had made that no case existed.

The failure to prepare an argument irritated the judge who ordered the complainant counsel to comply with  court proceedings and furnish his argument. The Judge stipulated that no further delay would be tolerated, stating that he wanted to decide the case as soon as possible. The next hearing was fixed for 29th January.

On 29th January the complainant counsel sent his assistant to attend the hearing who explained that he was on a training course. Despite warning that the counsel should not delay further the judge allowed a further postponement but stipulated that an argument must be ready for next hearing.

BACA had applied for a quashment (Pakistani legal term for cancellation of case) of Nabeel’s case on 25th January through Advocate Naseeb Anjum under section 249/249-A of the Code of Criminal Procedure of Pakistan (click here). Though the petition (No. 5422/22 ) was accepted and enlisted to be heard on 31st January 2022 it was rejected at the Lahore High Court.

Justice Muhamad Tariq Nadeem dismissed the petition stating that applications for quashment should be with the Pattoki District Court.

Naseeb Anjum informed the judge, that:

“The Home Department, denied the request to sanction a prosecution by the Inspector General of Police on  20th June 2017.

“The petition filed in the High Court against this decision by the Home Department was also dismissed by Judge Asjad Javiad Ghural.

Though it was in his jurisdiction to make a decision Mr Nadeem simply directed Naseeb Anjum to apply for a quashment through Pattoki Court.  It was very clear that he felt very uncomfortable with making a decision on this blasphemy case.

he next hearing at Pattoki  District Court was fixed for 12th February 2022. As usual BACA team picked up Nabeel from his safe house and prayed with his family before leaving. Salamat Masih (need age), father of Nabeel led prayers with the BACA team.

On arrival at court the assistant of the complainant counsel appeared at the hearing again aologised that the counsel could not make it . Sessions judge Sajid Mehmood ordered him to call the advocate insisting that he must furnish his argument at the hearing.  The judge expressed his disdain that the case had already been delayed massively.

The assistant confirmed that the complainant counsel would appear in the court at 11:00 am and Nabeel Masih and the BACA team were asked to wait for him.

Our team took Nabeel to a safe place and waited there for a call for  the hearing. At 11:00 am when our advocate approached the court clerk, it was discovered that the complainant counsel was not attending the court due to lawyers strike. Though no-one had thought to advise the BACA team of an adjournment, while they risked their lives and that of Nabeel Masih at court.

The next hearing was fixed for 26th February.  On the day of the hearing however, after again risking their safety, Nabeel and the BACA team were advised that the complainant counsel would not be attending because he was involved in bar elections.  A new date has been set and we will share an update.

As you can imagine secure transport, a safe house and legal representation of Nabeel Masih is an expensive outlay.  We rely on the donations of 0ur supporters to make this happen.  If you are moved by the plight of Nabeel Masih and wish to help us meet these costs please (click here).

Naseeb Anjum our advocate is still very confident that Nabeel will be acquitted, he said:

“I am confident that Nabeel will be acquitted.

“We simply have to wait for the court procedure to complete.

“I cannot understand why the High Court refused our quashment application – they had the power to enact the process.

“We continue to pursue our case at the Pattoki Court with expectation of an acquittal.”

“The court delays seem very deliberate by both the complainant counsel and Judge.

“The complainant counsel has often informed our BACA team that if we pay a bribe of close to £2000 he will drop all charges against Nabeel Masih.

“But of course we refuse to pay this.

“Judges in Pakistan have a habit of delaying Christian cases so that compromise deals can be made with Muslim complainants.

“The system is set up to oppress Christians in my opinion with judges often deeming a Christian guilty before proven innocent.

“Nabeel has almost five years of his life and we still await an acquittal for a case that has dragged on despite no evidence of a crime.”