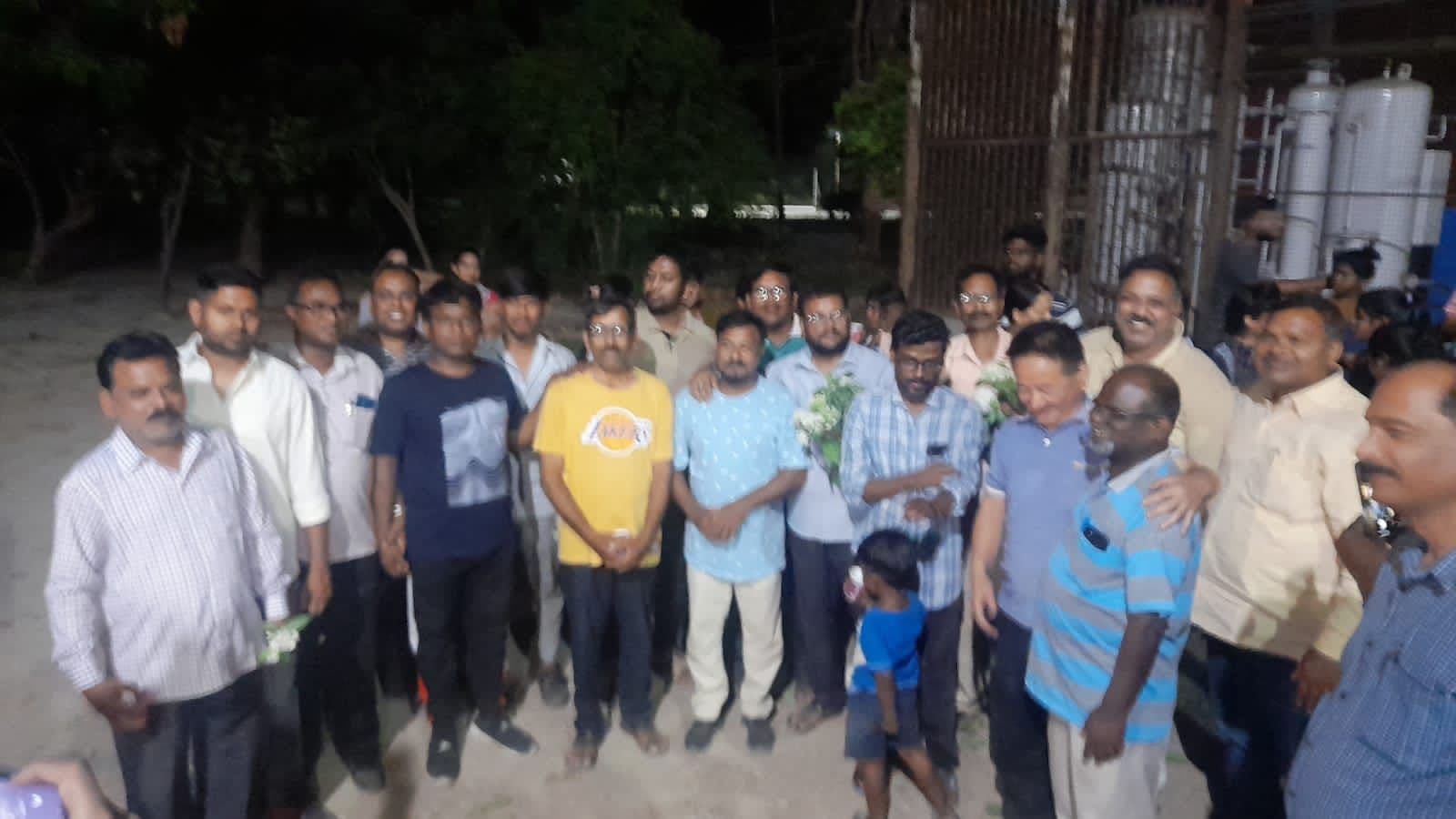 London: (By Hannah Chowhry) 55 Christians including  women have been booked for alleged illegal conversions in India.

35 parishioners were taken to a Police station after a mob of around 200 Hindus, locked over 100 Christians in the 19th Century building of the ‘Evangelical Church of India’  (ECI)  in Uttar Pradesh, during Maundy Thursday prayers.

At the station 9 women were allowed to leave and go home and 26 men were arrested and put in a cell, after being charged for unlawful conversions.

Despite rioting and holding over 100 Christians against their will in a building, none of the mob of at least 200 Hindu radicals were arrested.

Leaders from VHP have now registered several charges with the police against the Christian congregation in an attempt to persecute pariah Christians.

While members of Fathehpur ECI Church, in the town of Hariharganj including all staff from Broadwell Christian hospital were praying during a Maundy Thursday Service at 7.00 pm, they were disturbed by a large mob of around 200 Hindus.

ECI Church building was established by European Missionaries in 1860 under the name All India Conference and interdenominational Church. Next to the Church is the affiliated Broadwell Christian Hospital. In 1941 (pre-partition) the group became ‘One Mission Society’ churches and seminary schools were named Evangelical Church of India.

The Hindu men began shouting outside the church and locked the main gate so Christians could not exit the church.  The Hindu men accused the Christians of forcibly converting Hindus despite remonstrations from ex-Hindus and generational Christians, all of whom said they were in the church by their own volition and were not being bribed.

Video: Pastor Vijay explains that everyone is a willing visitor to the church and none are being bribed, in fact the members give donations.  He say’s: “You are Hindu you go to a temple, we are Christians we go to church”.

Members of the church called the Police but when emergency services arrived the Hindu mob refused to open the gates. The police seemed unable to provide more help or to exert pressure on the Hindu Mob to release the church hostages.

VIDEO: Police initially try to help Christians then  join the Hindu fanatics in questioning the Christians.  The next day at the Good Friday Service Police took ID’s from visitors to see if any converts were attending so they could no doubt interrogate them.

Over 100 men, women and children were locked in the church by the Hindu mob for 2 hours until 9pm when the mob finally opened the main gates to allow the elderly and children to leave the church at the behest of the police.

Christians remained calm and helped each other through difficult loss of liberty tales of communal hymns sung and prayers said are inspiring.

Then in a bizarre turn of events a total of 35 Christians consisting of 9 women and 26 men were taken to Kotwali Police Station, upon release from their forced captivity in the church building. The traumatised Christians leaving for home and those who were being arrested were jeered at and glared at by the raging Hindu captors.

“We thank God that we arrived home uninjured the large mob were very intimidating.

“I feared that without the help of our men and women that we would be badly attacked and the young children stolen from us.

“Police provided no protection as we walked for home.

“Children cried all the way home, scared for themselves and not knowing what would happen to their parents.”

The men were grilled by aggressive police for hours during Good Friday as the investigative officers seemed adamant that a crime had been committed by the Christians.  It seems that the unsubstantiated allegation of forced conversions  took precedent over the palpable illegal captivity of over 100 innocent Christians.

“The arrests were made following the registration of a case on a complaint by a Vishva Hindu Parishad office-bearer Himanshu Dixit, who alleged that around 90 Hindus have been illegally converted to Christianity by the ‘Evangelical Church of India’ in the Hariharganj area.”

“On Dixit’s complaint, an FIR was lodged at the Kotwali police station against 55 people, including 10 women, under various sections of the Uttar Pradesh Prohibition of Unlawful Conversion of Religion Act.”

“Thirty-five people were named in the FIR.

“Efforts are on to identify the remaining 20 (of the 55 accused),” he said, adding that the arrested ones are those named in the FIR.”

We have now read the original FIR registered by Himanshu Dixit, in which he alleges many crimes against the Christian community of the church. From his information Police registered charges under Sections: 153-A (see below), 420( Cheating and dishonestly inducing delivery of property), 467 (Forgery of valuable security), 468 (Forgery for purposes of cheating) and 506 (see below) of the Indian Penal code (IPC).

At 10pm on Good Friday the 31 men from the church were released on bail after a successful appeal by their advocate.  The presiding judge removed several of the charges only retaining 153A and 506 of the IPC.  They are also charged under various sections of the UP anti-conversion laws (click here)

Released Christians celebrate freedom with other members of the church a reunited child can be seen.

153A. Promoting enmity between different groups on grounds of religion, race, place of birth, residence, language, etc., and doing acts prejudicial to maintenance of harmony.

(1) Whoever (a) By words, either spoken or written, or by signs or by visible representations or otherwise, promotes or attempts to promote, on grounds of

religion, race, place or birth, residence, language, caste or community or any other ground whatsoever, disharmony or feelings of enmity, hatred or ill-will between different religious, racial, language or regional groups or castes or communities, or

(b) Commits any act which is prejudicial to the maintenance of harmony between different religious, racial, language or regional groups or castes or communities, and which disturbs or is likely to disturb the public tranquility, 2[or]

Offence committed in place of worship, etc.— (2) Whoever commits an offence specified in sub-section (1) in any place of worship or in any assembly engaged in the performance of religious worship or religious ceremonies, shall be punished with imprisonment which may extend to five years and shall also be liable to fine.]

“As we walk through a Christian life we have to expect persecution the Bible tell us this.

“We should not fear or be anxious God has His purpose.

“Even when we are innocent,  like what happened to our Lord Jesus people will come after us.

“We ask for Christians to pray for us as we go through this struggle.”

Pastor Vijay has asked for help towards the cost of a solicitor who continues to fight their case.  We envisage a cost of around £1000. If you would like to help Pastor Vijay and the many Christians caught up in this latest anti-conversion case you can donate (here).

“Uttar Pradesh is one of the latest states in India to adopt an Anti-conversion law.

“Footage of police standing by while Christians are being forcibly locked into their church and the whole scene broadcast across India, is a poor indictment of religious freedom in India.

“None of the Hindu rioters who have harassed and held hostage innocent Christians have been arrested or booked.

“If anything police seem to accept their behaviour as the norm endorsing it by nodding when the extremist leader questions the Pastor.

“Worse still at one point a police officer stops another from intervening by putting his hand-up and nodding while explaining something.

“The whole incident breaches so many international conventions that India has ratified including the UN Human Rights Act.

“Sadly, the UN and most western nations ignore these international breaches and allow India an unwarranted pivotal place in international government.

“I expect persecution of Christians to increase tenfold as Hindu nationalists continue to be emboldened by attack after attack with complete impunity.”

“We were once a very peaceful nation but since BJP have been in power extremist’s have seized control of many communities.

“Until a regime change occurs I fear we have many more incidents like this to suffer.”

You can read more about India’s relationship with the UN (here) the link also contains a list of all international conventions the nation has ratified.

During last months elections in India Bharatiya Janata Party (BJP) won another landslide victory.  BJP are known for the in Uttar Pradesh which contains many of their safest seats. In the Punjab BJP barley got a foothold as Aam Aadmi Party (AAP) won there with a huge margin.

It is no coincidence that Christian persecution is more severe and frequent in regions where BJP hold authority.  BJP is a party that was created to promote Hindutva (Hindu nationalism