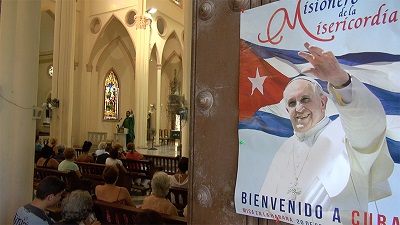 HAVANA: September 17, 2015. (HT) According to Fox News, the “most dangerous man on the planet” will be visiting Cuba in the coming days.

For them, Francis is an incendiary Pope who travels around the world condemning capitalism for its inequalities, injustice and consumerism. “We’re capable of acknowledging that these destructive realities stem from a system that has become global, but do we recognize that this system has imposed on us the logic of profit at all costs, to the expense of social exclusion or the destruction of nature?” he declared in Bolivia. For conservatives around the world, the Argentinean pontiff began to arouse suspicions when he traded the luxurious lifestyle of his predecessors for a much modest one. It is said the Jesuits believe in gestures more than they do in words. When Pope Francis speaks, he does not mince his words: “We want real change, structural change. We can no longer bear this system. The peasants can’t bear it, the workers can’t bear it, the communities can’t bear it, the peoples can’t bear it…Mother Earth can’t bear it.” The New Herald, Miami’s main anti-Castro newspaper, aims to discredit him, publishing a note stating that, if Francis “has a revolutionary calling, should he not be a trade union leader, a first minister or guerrilla leader instead of a Pope?” Many wonder why this Pope is so “political,” when, in fact, the word that best describes him is “down-to-earth.” He is a Vicar of Christ who finds no contradiction between saving souls and calling for a fairer distribution of the bread and fishes of the world. Clearly, Pope Francis is not a communist who has infiltrated the Vatican. In fact, he is defending the credibility of his Church when he tells the poor that misery, injustice and the planet’s destruction aren’t part of a divine plan and do not have God’s approval. He arrives in Cuba after acting as an intermediary in the reconciliation between Washington and Havana, a gesture that the two governments have publicly thanked him for. It is no accident that after visiting Cuba he will then head over to the United States, where he will likely continue to remove obstacles on the road to peace. In Cuba, the Catholic Church is a minority when compared to the Santeria religion. Despite this, it has secured enormous political influence over recent years. The key to this is found in a change of strategy, from open confrontation to peaceful exchange with the authorities. The Church distanced itself from the most renowned secular dissidents, like Oswaldo Paya. It shut down the Catholic opposition journal Vitral and began talks with the government. When Raul Castro took office, these talks assumed as concrete a form as the release of all prisoners of conscience. The Catholic Church was granted access to hospitals and prisons to see to their devout, restrictions on the entry of foreign religious leaders into the country were lifted and the creation of language, computer or business schools in churches was authorized. Some would “accuse” Cardinal Jaime Ortega of conniving with the government, but, following the visit of three different Popes to Cuba and after remaining in his position past the retirement age, no one can seriously believe he does not enjoy the Vatican’s support. For the government, the visit of Pope Francis, a Latin American and Jesuit priest, will be far easier to bear than that of previous Popes, both conservative Europeans (one of them forged in the confrontation against Poland’s communist government). Fidel and Raul Castro went to Jesuit schools and “have a special attitude towards us,” says father Alberto, a Cuban Jesuit. He adds that “a priest from our order was in the hospital and Fidel would phone every day and ask the doctors how his ‘boy’ was doing.” Cuba has released 3,500 common prisoners as a humanitarian gesture and some, like father Alberto, believe that Pope Francis can secure a permanent spot on the radio or television, a means of reaching the public which the Church has only secured at isolated points in history. It’s hard to predict what road the relations between Church and State will go down, but everything suggests they will consolidate the alliance that began to be forged at the end of the 1990s. The Catholic Church has very few followers in Cuba and a decades-long history of confrontation with the government only contributed to greater isolation. The Vatican published statistics claiming that 60 % of Cubans are Catholic, but such numbers are incredibly optimistic. Orlando Marquez, head of communications for the Cuban Catholic Church, acknowledged that “we are a minority, that’s more than clear. We always were and perhaps we will continue to be a minority.” Catholic historian Enrique Lopez Oliva notes that, today, churches are empty, that only 1 % of Cubans are practicing Catholics. He points out that, like before the revolution, today the majority of priests and nuns are foreigners. The death of the chief opponent of the revolution within the Cuban clergy, Monsignor Pedro Meurice, and the arrival of Pope Francis in the Vatican, consolidate the position of those who believe that the main objective of the Church ought to be creating the atmosphere it needs to grow.