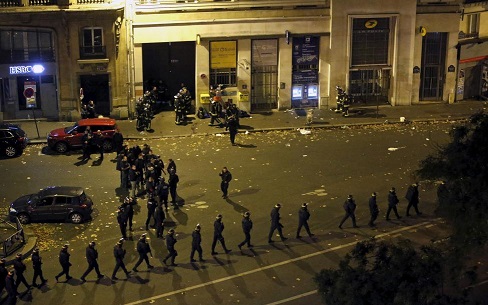 PARIS: November 14, 2015. (Reuter) Gunmen and bombers attacked restaurants, a concert hall and a sports stadium at locations across Paris on Friday, killing 127 people in a deadly rampage that President Francois Hollande was the work of Islamic State

There was no immediate claim of responsibility, but Islamic State released an undated video in which a militant said France would not live peacefully as long it took part in U.S.-led bombing raids against its fighters. A Paris city hall official said four gunmen systematically slaughtered at least 87 young people at a rock concert at the Bataclan concert hall. Anti-terrorist commandos launched an assault on the building. The gunmen detonated explosive belts and dozens of shocked survivors were rescued, while bodies were still being removed on Saturday morning. Some 40 more people were killed in five other attacks in the Paris region, the official said, including an apparent double suicide bombing outside the Stade de France national stadium, where Hollande and the German foreign minister were watching a friendly soccer international. Some 200 people were injured. The coordinated assault came as France, a founder member of the U.S.-led coalition waging air strikes against Islamic State in Syria and Iraq, was on high alert for terrorist attacks ahead of a global climate conference due to open later this month. It was the worst such attack in Europe since the Madrid train bombings of 2004, in which 191 died. Hollande said the death toll stood at 127. Officials said eight assailants had died, seven of whom had blown themselves up with explosive belts at various locations, while one had been shot dead by police. It was not clear if all the attackers were accounted for. "The terrorists, the murderers raked several cafe terraces with machine-gun fire before entering (the concert hall). There were many victims in terrible, atrocious conditions in several places," police prefect Michel Cadot told reporters. After being whisked from the stadium near the blasts, Hollande declared a national state of emergency - the first since World War Two. Border controls were temporarily reimposed to stop perpetrators escaping. Local sports events were suspended, the rock band U2 canceled a concert, the Paris metro railway was closed and schools, universities and municipal buildings were ordered to stay shut on Saturday. However some rail and air services were expected to run. "This is a horror," the visibly shaken president said in a midnight television address to the nation before chairing an emergency cabinet meeting. He later went to the scene of the bloodiest attack, the Bataclan music hall, and vowed that the government would wage a "merciless" fight against terrorism. Sylvestre, a young man who was at the Stade de France when bombs went off there, said he was saved by his cellphone, which he was holding to his ear when debris hit it. “This is the cell phone that took the hit, it's what saved me," he said. "Otherwise my head would have been blown to bits," he said, showing the phone with its screen smashed. French newspapers spoke of "carnage" and "horror". Le Figaro's headline said: "War in the heart of Paris" on a black background with a picture of people on stretchers. Emergency services were mobilized, police leave was canceled, 1,500 army reinforcements were drafted into the Paris region and hospitals recalled staff to cope with the casualties. Radio stations warned Parisians to stay at home and urged residents to give shelter to anyone caught out in the street. The hashtag #porteouverte (open door) started up on Twitter to offer people a place to stay. The deadliest attack was on the Bataclan, a popular concert venue where the Californian rock group Eagles of Death Metal was performing. The hall is near the former offices of the satirical weekly Charlie Hebdo, target of a deadly attack by Islamist gunmen in January. Some witnesses in the hall said they heard the gunmen shout Islamic chants and slogans condemning France's role in Syria. France has been on high alert ever since the attacks on the Charlie Hebdo newspaper and a kosher supermarket in Paris in January killed 18 people. Those attacks briefly united France in defense of freedom of speech, with a mass demonstration of more than a million people. But that unity has since broken down, with far-right populist Marine Le Pen gaining on both mainstream parties by blaming immigration and Islam for France's security problems.