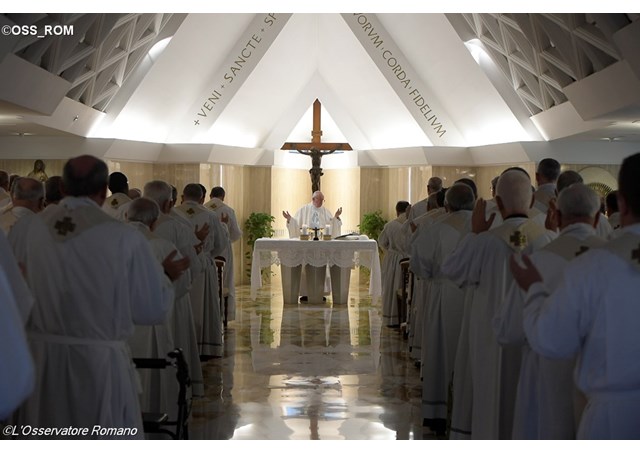 Italy: September 17, 2016. (Vatican Radio) Pope Francis was the principal celebrant at Mass on Saturday morning in the chapel of the Casa Santa Marta,

together with a large group of Apostolic Nuncios who are in Rome for a major Jubilee Year of Mercy gathering. In remarks following the Readings of the Day, the Holy Father thanked the Papal diplomats for their willingness to renew their commitment to service in new and different countries with joy and enthusiasm, and encouraged the members of the corps to get out of their comfort zones and go beyond the limits of their own strengths and abilities in order to carry the Gospel of Christ to every corner of the globe. Taking the Gospel parable of the sower as his focal point, Pope Francis reflected on how Apostolic Nuncios sow the Good News everywhere in the world. The Pope acknowledged that often the life of the Nuncios is a “gypsy life” spent constantly on the road: “Just when you have learned the language well,” in one post, “a phone call from Rome and ... ‘Oh, look, how are you?’ – ‘Well ...’ – ‘You know, the Holy Father, who loves you so much ... he thought ...’ - because these calls, these calls are made of sugar, is it not so? – ‘... he thought of you for this .... and so you pack your bags and go to another place, leaving friends, leaving habits, leaving many things one has done ... to get out of yourselves, get out of that place to go to another,’ and there, to begin again.” “When you arrive in a new country,” the Holy Father continued, “the Nuncio must make another” exit”: “[He must get out of the – even only very lately acquired – comfort of his own skin] to learn, to dialogue, to study the culture, the way of thinking. Sow the Word of God without getting caught up in mundane sophistication Pope Francis went on to note how, “getting out” can often mean “attending receptions” – some of which are “rather boring” – but even so, “you can sow there,” too. “The seed is always good, the grain is good.” Someone, he noted, may think it is a job that is, “too functional, even administrative,” work many qualified lay people might do: “The other day, talking about this, I heard the Secretary of State who said, ‘But, look, at receptions, the many people who seem superficial look for the collar – and you all know what you have done in so many souls: in that mundane society, but without taking on the worldliness, only taking people as they are, hearing them, talking with them ... this is also [one way in which] the Nuncio gets out of himself, to understand the people, to talk ... it IS a cross.” The Pope went on to recall that Jesus says that we – that the sower – sows the seed, and then he rests, for it is God who makes it sprout and grow.” The Nuncio, too, he said, “must come out of himself and go toward the Lord who makes the seed grow and germinate – and he must go beyond himself before the tabernacle, in prayer, in worship.” Always begin anew with joy and enthusiasm, even amid difficulties It is a “great witness”, this, he reiterated, “the lone Nuncio adoring the One who makes things grow, the One who gives life”: “These are the three ways in which a Nuncio must be called to ‘go beyond’ himself: there is the physical going beyond of the Nuncio’s ‘gypsy life’; there is the cultural skin that he must shed: to learn the culture, learn the language ... ‘Tell me’ - in that phone call – ‘tell me, what languages do you speak?’ – ‘I speak good English, French, I get along with him Spanish ...’ – ‘Ah, well, well ... But listen: the Pope has decided to send you to Japan, eh!’ – ‘But I do not know even one letter, of Japanese!’ – ‘But, you'll learn!’. I was edified by one of you, before submitting credentials, in two months had learned a difficult language, and had learned how to celebrate [Mass] in that language: he started over with enthusiasm and with joy. This is the third ‘way of being for others’: prayer, worship.” Thanks to Nuncios for their service to the Church, and may they always be ‘outward bound’ This, he said, “is stronger in emeriti nuncios.” It is also a task of “brotherhood”, the “Nuncio emeritus prays more, he must pray more for the brothers who are there, out in the world.” The Nuncio who is still in service, Pope Francis explained, must not forget this adoration, “that the Master might prosper that, which he has sown”: “Three ways of being ‘outward bound’ and three ways to serve Jesus Christ and the Church: and the Church thanks you for all three of these. Thanks so much. And I, personally, want to thank you. I admire so often, when I, early in the morning, receive your communications: look how this fellow is getting on ... May the Lord give you all the grace to stay current in these three ways of being for others – these three ways of getting out of yourselves.”