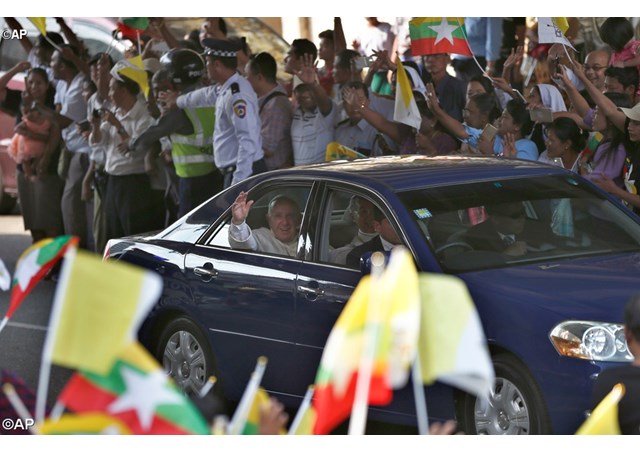 Vatican City: November 27, 2017. (Vatican Radio) Pope Francis arrived on Monday in Yangon, where he was greeted by Myanmar’s political and religious authorities,

as well as by crowds of ordinary people who lined the road to the archbishop’s residence where he’ll be staying for the three-day visit. Philippa Hitchen is in Yangon to report on this papal journey and was among the crowds waiting for the Pope and his entourage to arrive in the city centre. It’s stiflingly hot here in downtown Yangon, but that didn’t stop thousands of people crowding into the city to line parts of the route where the papal motorcade passed by today, on its way from the airport to the archbishop’s house. While I’d forgotten to put any sunscreen on, almost everyone here uses the pale yellow juice of a local plant smeared on their cheeks to protect them from the sun’s rays. They’d come from all across the country, especially from the northern states where the majority of Christians live, largely in isolated, rural or mountain villages. ‘Peace and Love’ logo Their excitement was palpable as they waved Vatican or Myanmar national flags, waiting for the pope to pass by. Many were dressed in traditionally embroidered tops and ‘longyis’, those brightly coloured lengths of cloth that everyone – women and men – wear wrapped around them here. Others sported hats and T-shirts bearing the words ‘Love and Peace’, the logo for this trip, depicted above a multi-coloured outline of the country, to signify the 135 ethnic groups that make up this south-east Asian country. Inside Archbishop’s House Inside the garden of the archbishop’s house, a group of eager Catholics (including a couple of nuns, who stood out from the colourful crowd in their white habits and veils) were energetically dancing and singing. As the blue car, carrying Pope Francis swept through the gates, their cries of excitement rose to fever pitch, as he stepped out and began walking up the path to the cream-coloured, colonial style residence. Tuesday’s papal programme For the remainder of the day, he’s resting, after the more than 10 hour flight from Rome. Then on Tuesday, it’s back to the airport for the short journey up to the capital, Nay Pyi Taw, where he’ll be welcomed by the president and by Burmese leader, Aung San Suu Kyi. Those meetings will, of course, be held behind closed doors and even his first public address to government officials and diplomats at a nearby convention centre will only be open to the few, carefully selected guests. Outdoor Mass on Wednesday So the crowds of eager Catholics who lined the streets today will have to wait until Wednesday morning for their chance to hear and see the pope in person. That’s when he celebrates an open-air Mass at a colonial era racecourse, which also served as a detention centre during the darkest years of military rule. Patiently waiting for the Pope Earlier in the week, I met many of the pilgrims on their way down to Yangon from other towns and villages around the country, including a dozen lucky children who were picked to form part of the welcome delegation at the airport today. Many of the Catholics are from poor families and most of them told me they didn’t have accommodation here in the city. They’re simply going to camp out on the grounds of that sports arena, patiently waiting for their big moment to arrive.