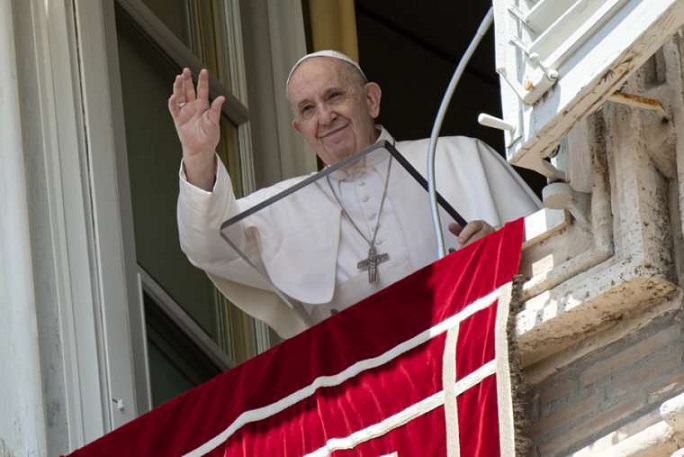 Vatican City: (CNA) Pope Francis urged Catholics Sunday to follow “God’s logic” by taking responsibility for the welfare of others.

He noted that at sundown the “practical” disciples had urged Jesus to send away the hungry crowd to find food. But Jesus replied: “You give them something to eat.”

“Jesus wants to use this situation to educate His friends, both then and now, about God’s logic,” the pope said, according to an unofficial translation provided by the Holy See press office.

“No. The logic of taking responsibility for others. That ‘let them fend for themselves’ should not enter into the Christian vocabulary.”

Pope Francis recalled that, after the disciples had presented Jesus with five loaves of bread and two fish, Christ performed a miracle enabling everyone to eat as much as they wanted.

He said: “With this gesture, Jesus demonstrates His power; not in a spectacular way but as a sign of charity, of God the Father’s generosity toward His weary and needy children. He is immersed in the life of His people, He understands their fatigue and their limitations, but He does not allow anyone to be lost, or to lose out: He nourishes them with His word and provides food in plenty for sustenance.”

Speaking from a window overlooking St. Peter’s Square, the pope pointed out the connection between the miracle of the multiplication of loaves and the Eucharist.

“It is noteworthy how close the link is between the Eucharistic bread, nourishment for eternal life, and daily bread, necessary for earthly life,” he observed.

“Before offering Himself to the Father as the Bread of salvation, Jesus ensures there is food for those who follow Him and who, in order to be with Him, forgot to make provisions. At times the spiritual and the material are in opposition, but in reality spiritualism, like materialism, is alien to the Bible. It is not biblical language.”

He continued: “The compassion and tenderness that Jesus showed towards the crowds is not sentimentality, but rather the concrete manifestation of the love that cares for the people’s needs.”

The pope said that Catholics should approach the Eucharist with the same compassionate attitude that Jesus displayed during the feeding of the 5,000.

“Compassion is not a purely material feeling; true compassion is ‘patire con’ (to suffer with), to take others’ sorrows on ourselves,” he said.

He concluded: “Let us not forget this word ‘compassion,’ which is trust in the provident love of the Father, and means courageous sharing.”

After reciting the Angelus, the pope expressed his sorrow at a firebomb attack on a cathedral in Nicaragua on July 31.

Describing the indulgence as a spiritual gift that St. Francis of Assisi received from God through the intercession of the Virgin Mary, Pope Francis noted the conditions for obtaining the indulgence. They consist of Confession, reception of the Eucharist, visiting a parish or Franciscan church, recitation of the Creed and Our Father, and prayer for the pope and his intentions. The indulgence may be applied to the living or the dead.

He said: “How important it is to always put God’s forgiveness, which ‘generates heaven’ in us and around us, back at the center, this pardon that comes from God’s heart who is merciful!”

Looking at pilgrims gathered in the square below, the pope greeted a group from Palosco, in the northern Italian region of Lombardy, Brazilians holding their national flag, and those devoted to Mary Immaculate.

He said he hoped that in the coming days everyone would be able to rest, spend time in nature, and be spiritually refreshed.

“At the same time I hope that, with the converging commitment of all political and economic leaders, work might resume: families and society cannot continue without work. Let us pray for this,” he said.

“It is and will be a problem in the aftermath of the pandemic: poverty and lack of work. A lot of solidarity and creativity will be needed to resolve this problem.”