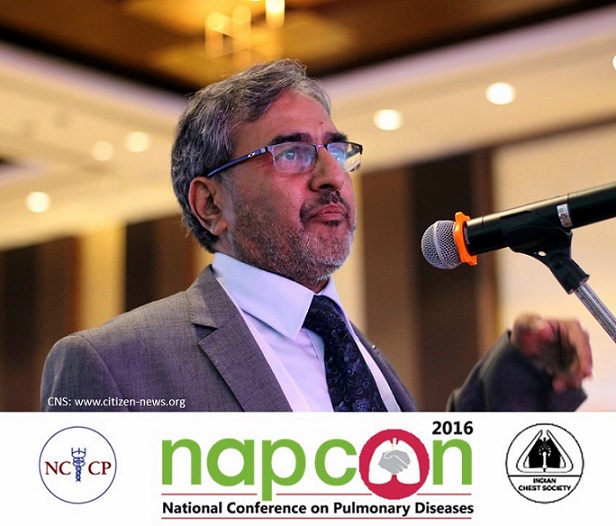 Alarming rates of pulmonary diseases in India are warranting urgent action as well as well-coordinated and inter-sectoral comprehensive health responses across the country to ensure every citizen enjoys lung health.
"Recent smog in parts of north-central India had worsened the air quality in a dangerous manner sending lives of people in jitters and leaving behind disproportionately high economic impact. Emergency public health measures must be in place because healthy lungs are an indispensable need if we want a healthy country" said Director Professor (Dr) KC Mohanty, Organizing Chairman of 18th Joint National Conference on Pulmonary Diseases (NAPCON 2016) in Mumbai, India.
NAPCON 2016 is organized by India’s two eminent professional associations: National College of Chest Physicians (India) and Indian Chest Society, and has scientific or educational collaboration with the Tuberculosis Association of India, Environmental Medical Association, AIDS Society of India, Peoples Health Organisation (India), Geriatric Society of India, Government of India’s Vallabhbhai Patel Chest Institute Delhi, among others. Mumbai is hosting NAPCON 2016 during 24-27 November 2016.
“This year a whopping 2717 delegates, the highest ever, have registered, comprising chest physicians, internal medicine physicians, TB specialists and HIV/AIDS experts, including about 70 international delegates, (mainly from European Respiratory Congress, American College of Chest Physicians, SAARC and BRICS countries) are expected to attend the meet. The Chief Guest is His Excellency Governor of Nagaland Shri PB Acharya and the keynote address will be delivered by Dr Deelip Mhaisekar, Vice Chancellor, Maharashtra University of Health Sciences” shared Prof KC Mohanty, who has played a steering role in instituting NAPCONs over the last two decades.
Prof KC Mohanty told CNS (Citizen News Service) that “A recent study published in The Lancet showed that number of TB cases in India may be up to 2-3 times higher than the latest current estimates. There was roughly twice as much TB treatment in the private sector as in the public sector in the country. In 2014, 6.3 million TB cases were reported worldwide, with India accounting for over 25% of them - the highest for any country. TB can affect anybody irrespective of age, sex, caste or socioeconomic status. The mountainous challenge posed by drug-resistant TB mandates urgent public health attention.”
Dr Ishwar Gilada, President of AIDS Society of India (ASI) and Co-Chairman of NAPCON 2016 said: “NAPCON 2016 will present latest scientific updates on a range of pulmonary diseases that are gaining almost an epidemic proportions in India. Asthma, bronchitis, chronic obstructive pulmonary disease (COPD), interstitial lung disease (ILD), interventional geriatric and paediatric pulmonology, environmental medicine, lung cancer, sleep disorders, TB and TB-HIV co-infection, pneumonia, and use of tele-health technologies for management of chronic lung conditions are among the major highlights which NAPCON 2016 will present to diverse medical specialties dealing with their management in India and globally.”
“India not only has one of the highest disease burden for TB, drug resistant TB or TB-HIV, asthma, COPD, childhood pneumonia among others, but also is confronted with health system related complex challenges. Moreover the risk factors that aggravate a number of lung diseases are often common such as indoor and outdoor air pollution or tobacco smoke or use of biomass based cook stoves. TB and HIV makes a deadly combination in India projecting them as conjoint twins, as India is number one in TB and number three in HIV globally. We need to explore all possible synergies and collaboration between different vertical disease interventions and forge effective partnerships with non-health sectors too so that public health outcomes are enhanced manifold” added Dr Ishwar Gilada.
“India with other countries has committed to achieve Sustainable Development Goals (SDGs) by 2030, among which are targets to end TB and AIDS, achieve universal health coverage, substantially reduce the number of deaths and illnesses from hazardous air pollution and contamination, reduce deaths due to non-communicable diseases (like asthma or COPD) by one-third, among others”, said Dr Salil Bendre, Vice-Chairman of NAPCON 2016.
“Despite these towering promises of SDGs, Indian data suggests our progress is not towards these goals, rather slipping backwards. TB rates were found higher than previously estimated as per latest WHO Global TB Report 2016, asthma and COPD both are rising to emerge as leading cause of death among pulmonary diseases, and COPD is recognized as the second biggest killer among NCDs”, said Dr Agam Vora, Secretary General of NAPCON 2016. Rates of Lung fibrosis are climbing up menacingly since past five years. Amongst the diffused lung diseases, idiopathic lung fibrosis (IPF) rates are almost 27% - 41%. It sets in slowly and is usually detected very late severely reducing quality of life of patient and treatment outcomes. The manner in which smog converted a part of India into almost a gas chamber needs action as never before to curtail all causes of air pollution including automobile emissions, deforestation, etc.
Addressing pulmonary diseases is an imperative for government to accelerate progress towards health related SDGs.
Noted film-star Anil Kapoor will be honoured and instituted as the Brand Ambassador for clean air and healthy lungs at NAPCON 2016.
(Shobha Shukla is the Managing Editor of CNS (Citizen News Service) and is lead author of several publications on lung health. Follow her on twitter @Shobha1Shukla or visit www.citizen-news.org)