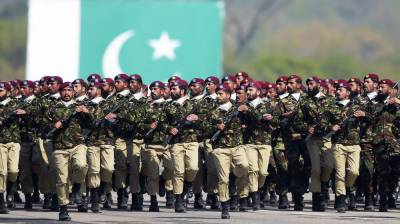 The two ironies are over sixty years old, but they are getting more and more relevant by the day. Every nation has an army, but, it said, not in zest, that in Pakistan the army has a nation. The other is that the country’s armed forces, particularly the Pakistan Army, are fattening even as the country is getting poorer. That explains how and why a nation so desperately struggling to feed its poor and unable to repay its international debts, has emerged among top 20 military spending countries in 2018. After conducting political and then electoral engineering in July last year, the first thing the military did was to wrest a whopping 20 percent hike in the defence budget from the new government of Prime Minister Imran Khan, its current protégé.

It is hardly surprising that Pakistan was 2018’s 20th biggest military spender in the world with an expenditure of $11.4 billion, a report published by the Stockholm International Peace Research Institute (Sipri) has said.

This is a persistent trend in that over the past 10 years, Pakistan’s military spending has risen by 73 percent, Sipri report says. The military spending of 2018 made up for four per cent of Pakistan’s gross domestic product (GDP) which is the highest level since 2004, according to the report by the Sweden-based institute. The Sipri report has ranked Pakistan among the top 10 countries with the highest “military burden” — described as a “state’s military expenditure as a share of GDP”.

Since 2009, Pakistan’s military spending has increased every year, the report stated, adding that between 2009 and 2018 the spending increased by 73pc. In 2017-18, the increase in military expenditure was 11pc, it said.

Since Pakistan cites India as the Number one threat to its very existence, comparisons are necessary. According to the report, India’s military spending rose by 3.1 percent during 2017-18. But despite the increase from last year, India’smilitary burden was the lowest since the 1960s and made up for 2.4pc of its GDP.

Pakistan spends 4 percent of its GDP while India has remained at 2.5 prcent of the GDP for the last four decades that includes a rising bill of pensions for ex-servicemen and rehabilitation programmes — in contrast to Pak military’s galloping commercial interests.

However, we do not know the actual Pakistani defence spending since in the past, some its key missile development programmes were found hidden in the PIA budget.

A third irony has emerged over the years. Pakistan — right at this moment — is struggling with its economy. It has no money to service its debts and its Prime Minister Imran Khan isgoing from country to country seeking funds to thwart an economic crisis. Even the World Bank has suggested Pakistan put a cap on its defence budgets. But will it be the civilian government that is abjectly dependent upon the army or are the armed forces going to commit this hara-kiri?

This perhaps explains how when Pakistan doesn’t have enough money to pay for its exports, the manner in which it is maintaining terrorist camps at such high costs. The answer is — Pakistan has no money but its army is cash-flush.

The fact is that Pakistan’s defence spending is rising even as its economy is stretched. It is seeking its 13th bailout from the International Monetary Fund (IMF), but the US’ Trump administration that has already withheld USD three billion of aid to Pakistan is making things difficult with the IMF.

While blocking IMF bailout, however, Trump is cleverly asking the Saudi Arabians and the UAE monarchies to chip in, so that Pakistan does not lose more ground economically. But what the two have given is not enough for Imran Khan and his mentors to run the economy.

The ground reality is that World Bank, IMF and others can place restrictions, show the way out and advise. But they cannot run Pakistan that is obsessed with India. It is wedded to a thousand year war with India and is prepared to eating grass but make nuclear weapons.

All this has not stopped it from exporting militancy to Iran, Afghanistan and India and yet playing the victim. Pakistan has developed serious problems with all three in the recent months, in Sistan with Iran, at Pulwama with India and with Afghanistan, there has been a series of border skirmishes.

Under these circumstances, Pakistan military’s role will continue to be predominant in the country’s life and keep its machine moving, defence spending is bound to grow in the coming years. The defence budget will continue to rise as well because the military must buy and maintain more and more gizmos.