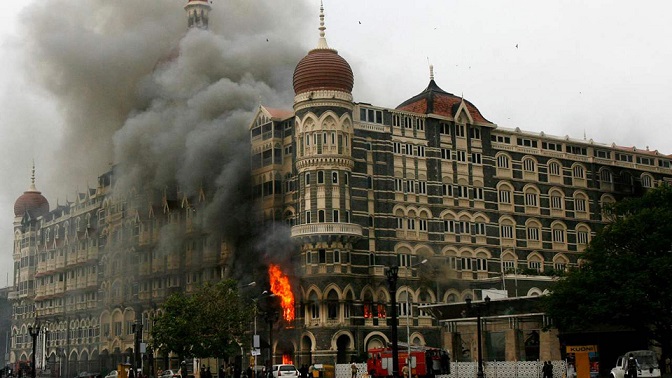 The unrelenting effort by India under Prime Minister Narendra Modi to highlight the dangers of terrorism and the need for united action has its genesis in the November 26, 2008 terror attacks in Mumbai.

Then Gujarat’s Chief Minister, Modi, was first among senior political leaders to visit a traumatized Mumbai within that week. He emphasized the need to involve the international community to strongly condemn “the violations of the United Nation’s conventions by Pakistan.”

Today, be it BRICS, SCO, ASEAN, in Russia, the US or China, Modi-led India has worked hard to underscore this point, winning grudging acceptance from even known friends and allies of Pakistan, from where the Mumbai attack had emanated.

To recall, Begun on the evening of November 26, 2008, it was the biggest attack on India and that too, on its principal commercial hub. The next three days claimed the lives of 146 civilians and 20 security personnel, while more than 300 were injured.

“Mumbai-style terror attack” has gained a permanent place in the lexicon of the global discourse on urban terrorism. The audacity and ambitious scope of the attack, the complexity of the operation, the diversity of its targets, the prolonged nature of the attack with a mounting death toll that covered many foreign nationals, ensured that the siege had the world’s news media hooked.

Till the 26/11 attacks, terrorism emanating from Pakistan was essentially seen as a subset of the India-Pakistan conflict over Kashmir.  The Mumbai attacks is seen as India’s 9/11 moment. As former foreign secretary Kanwal Sibal puts it, “There was a major surprise element as it came from the sea, it exposed our vulnerabilities.”

In the months preceding the attack, David Coleman Headley, an American national with Pakistani parentage and terror linkages, and a key 26/11 conspirator, had made several reconnaissance trips to Mumbai.  Ironically, just a month before the terrorists struck, the US itself had warned India about a possible terror strike. India has since left behind that agonizing experience and has forged a relationship with the US that includes information and intelligence sharing on terrorism.

The “Mumbai mayhem” orchestrated by attackers associated with Lashkar-e-Toyaba (LeT), a Pakistani terror group with ties to Pakistani intelligence has redefined India and Indians as never before in its dealing with the world. It has helped India strengthen its position diplomatically by getting the world to recognize Pakistan as a terror hub.

The assault reshaped India-Pakistan relations that, eleven years hence, have not normalized. India has made cessation of terrorism by Pakistan the principal precondition for any bilateral dialogue.  This is unlikely to change since Pakistan-sponsored attacks this year at Gurdaspur, Uri and Pulwama. India’s launching “surgical strikes”, twice, show that Indi is ready to counter any Pak misadventure. In that, it has secured a tacit nod from the world community.

Anticipating Mumbai-inspired attacks doesn't mean they'll be automatically averted, especially when they involve simple weaponry and can exploit the open access afforded by major cities in the West and beyond.  From a global perspective, the Mumbai attacks established a terrifying new template for terror -- one that al-Qaeda and ISIS would often replicate in subsequent years. The blueprint is simple: Small bands of heavily armed assassins staging coordinated attacks on soft targets in urban spaces. The examples proliferate.

In 2013, militants stormed a shopping mall in Nairobi and bombers targeted the Boston Marathon. In 2015, gunmen besieged a concert hall, a sports stadium, and restaurants in Paris. And in 2016, assailants attacked the airport and a metro station in Brussels, and jihadists attacked a cafe in Dhaka. Additionally, potential Mumbai-style attacks in Copenhagen and Madrid were foiled in 2009 and 2015, respectively.

Lastly, the terror attack on a church in Sri Lanka forced a change in the political discourse as evident from the just-concluded presidential elections.  Nothing angers Indians -- and sensitive people anywhere -- more than the fact that the perpetrators of 26/11 still manage to walk free in Pakistan. They include Hafeez Saeed, the LeT founder and mastermind and his team of handlers and executors of Mumbai attacks headed by Zakiur Rahman Lakhvi.

Saeed and his men are temporarily jailed under pressure from the world community FATF; and then released by courts that find the police case weak, which is deliberately left that way. Pakistan is dragging its feet and there is hardly a mention today of 26/11 in Pakisatni media.

For India, there is a consolation prize. The arrest of Ajmal Kasab, was a game-changer. For the first time, a participant in a suicidal attack with high interrogation value had been captured. He was saved from any angry retribution and hospitalized. Jailed and tried by a court, as in a civilized society, he was given lawyers to defend himself unlike Kulbhushan Jadhav in Pakistan. Convicted, he was given multiple chances to appeal for mercy before being hanged.

Kasab independently confirmed to the US’ FBI what he had told the Indian police: he was a Pakistani citizen and a member of LeT, and the attack was being directed in real-time from the Pakistani port city of Karachi via mobile and internet telephony. This digital trail connecting the gunmen in Mumbai with controllers in Karachi proved crucial.

All this led to criticism from former Pakistani Prime Minister Nawaz Sharif. Nearly ten years later, Sharif observed that Pakistan’s failure to deliver justice for the Mumbai victims had eroded its credibility globally. Whether this admission could, or would,persuade the present rulers in Pakistan to act to curb terrorism within their fold is a point worth pondering.